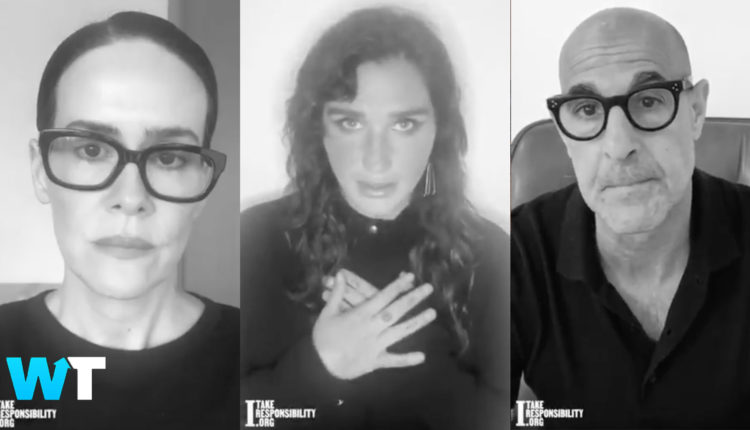 People are taking to social media to criticize the latest celebrity social media campaign entitled #ITakeResponsibility. This campaign features notable white celebrities discussing their complicity in systematic racism and discrimination and “taking responsibility for the ways they’ve perpetuated racism through silence or inaction,” challenging others to do the same.

Launched in collaboration with the NAACP, famous performers and influencers encouraged people to post their own videos addressing complicity in systematic racism with the same hashtag. Many of the participants reposted the video on social media with the hashtag #ITakeResponsibility. They also encouraged the internet to donate to organizations fighting injustice.

In the two minute black and white PSA video, celebrities such as Kesha, Julianna Moore, Krisen Bell and Stanley Tucci apologized for their past involvement in racism and stereotyping, whether direct or indirect.

Today, #ITakeResponsibility for my role in eradicating racism in America. Unless white America acknowledges its privilege, systemic racism will persist. Act Now. What will you commit to? https://t.co/OjSR23y7lp. @NAACP @itakeresponsibility #itakeresponsibility #blacklivesmatter pic.twitter.com/NYH2WQyiKP

Tucci’s name was trending on twitter thanks to the video, as people accused him of reading a script while filming it. “I will no longer allow an unchecked moment, I will no longer allow racist, hurtful words, jokes, stereotypes, no matter how big or small to be uttered in my presence,” he said.

The NAACP and ITR issued a joint statement this Thursday clarifying the campaign, saying “’I Take Responsibility was created to drive a broad coalition to take action by supporting numerous organizations who fight for oppressed communities.” The statement went on to say, “At ITakeResponsibility.org, we point people to organizations who are on the front lines, fighting for police accountability, mobilizing voting efforts and providing resources to families directly affected. We encourage everyone to take action and donate. We are proud of those that used their voices in solidarity with this purpose.”

Many have criticised the video as an empty gesture, saying that it has no tangible effect and is lacking real effort, urging the celebrities to make a real change through actions such as donating. Several took to twitter to voice their opinions on the video and the campaign these celebrities are promoting.

#ITakeResponsibility? Are they acting in this PSA? Did black people ask for this? Can someone help me understand?

Talking earnestly for 30 seconds on a cellphone video is not taking responsibility. Donating your money, marching in protests, signing and signal-boosting petitions…that is how you take responsibility.

But thanks for this month's "Celebrities sing Imagine" video, I guess?

Some drew comparisons to the pandemic-inspired cover of John Lennon’s “Imagine” that was orchestrated by Gal Gadot this March. The video featured famous faces such as Jimmy Fallon, Jamie Dornan, Natalie Portman and Sia singing the song. This video met with criticism as well, with the internet saying that the celebrities should have done something more substantial to aid relief efforts for the pandemic.

Didn’t they just do this with John Lennon’s imagine, did they not learn from that?

Do you think these celebs are making a change or that they need to act more and say less? Comment below!

8 Emerging Black Artists You Need To Listen To