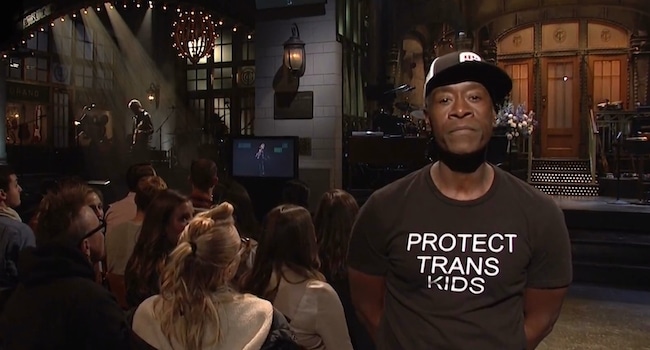 For some reason it can be hard for a celebrity to say a real opinion sometimes. Sure, it might seem like celebs are outspoken animals with no goals but to destroy the admittedly hateful conservative establishment, but sometimes you can see celebs considering their audience in more conservative parts of the world, and playing it safe with opinions they know will be accepted. Not so with Don Cheadle. Just as the world wants to wage a war over where transgender people want to piss and shit, just as homophobic and transphobic parents want to case out their children for who they are rather than loving them as one naturally usually does with the product of their own spawn, Don Cheadle introduced the SNL musical guest, Gary Clark Jr., with a t-shirt that beautifully said “Protect Trans Kids”, referring to the fast that well… mainstream America is very much letting them down.

Teachers are losing their minds over trans children wanting to use the bathroom of their gender, Mike Pence is a homophobic monster waiting in the shadows in the case Trump gets impeached, and now trans people can’t even serve in the military, which I would argue is a much greater distraction than like– being informed about gender or whatever the hell Trump is afraid of. It’s not a topic every celebrity will speak out about, especially on a four quadrant mainstream show such as SNL. But Don Cheadle did it, and kudos to him.

It wasn’t his only bold t-shirt choice of the evening though. When it came time for good byes, Don Cheadle wore what looked like a hockey jersey, with the Russian/Cyrillic characters SSSR (aka the USSR, aka the Soviet Union, aka Russia), with the president’s name and his number, 45, on the back, alluding to Russian collusion.

Man, no wonder Trump hated this episode. Even people’s clothing thought he was a piece of shit.

What do you think of Don Cheadle’s clothing choices? Let us know in the comments or on Twitter at @WhatsTrending.