It's official: an egg is now more popular than Kylie Jenner... 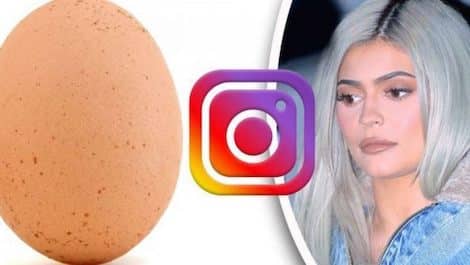 There’s so many world records out there, that it becomes hard to keep up with them. However, one world record that many people aspire to hold one day, is most liked on a social media platform. Recently, Japanese billionaire, Yusaku Maezawa, knocked Wendy’s Chicken Nugget Boy, Carter Wilkerson, off the throne, and took the crown for most retweeted tweet of all time, with over 5.4 million retweets! Although, this really only showed how shallow people are…

No inspirational tweet, no meme quality content, just about the money. But hey, it’s a pretty big record to hold, especially when your last name isn’t Kardashian. Speaking of Kardashians, Kylie Jenner recently reigned Instagram with the most liked post of all time, which featured a very adorable photo of her daughter’s hand clasped around Jenner’s thumb.

It was a heartwarming moment that touched over 18 million people’s hearts…but that didn’t last for long, as along came the egg…

It’s Kylie’s worst nightmare, is it a chicken? Is it a pig? No it’s an egg! An egg that took away one of her biggest achievements!

User, @world_record_egg, set up their account on January 4th, and posted their first post on the social media site, a picture of an average looking egg. They had big hopes that the post would go viral and achieve what their username set out to do and oh boy, they really did!

Let’s set a world record together and get the most liked post on Instagram. Beating the current world record held by Kylie Jenner (18 million)! We got this ? #LikeTheEgg #EggSoldiers #EggGang

The egg now holds over 29 million likes, and the numbers keep going up and up. However, Kylie has set out for revenge to claim her throne back, and posted this video to Instagram to show she’s not messing around..

All jokes aside, Kylie doesn’t seem too bothered about her social status plummeting because of an egg, and instead, has found the fun and games in all of this. But seriously egg, I’d watch out for the wrath of Kylie Jenner and her frying pan.

Do you reckon the egg will stay in the spotlight? Do you reckon Kylie should set out to get another world record? Let us know in the comments, or on Twitter at @WhatsTrending.