Eminem is back, but this time he is not Slim Shady, he is Salty Son of a Bitch... 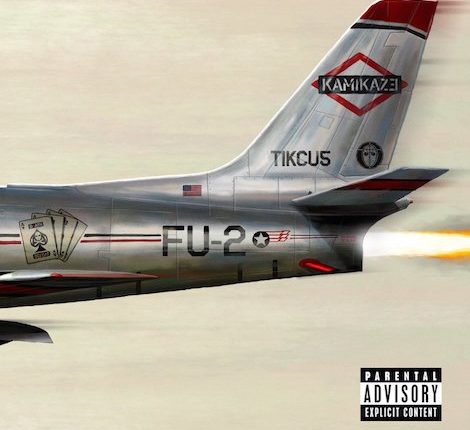 Eminem hit us with a surprise drop of his new album. Kamikaze, on Thursday night. Although Marshall’s beats and rhymes usually impress the majority of us, his title track took it too far, as many shots were fired at different rappers. A homophobic dig he made at Tyler the Creator left his fans very disappointed.

It still amazes me how people can stoop so low and still make fun of people for being who they are. I know some people may do it to feel better about themselves, or sometimes they do it because they are just plain mean, but it’s still a very silly immature thing to do, and it’s definitely not something you’d expect from a 45-year-old.

Eminem began calling out other rappers, by saying ” These rappers are like Hunger Games, one minute they’re mockin’ Jay…then they copy Drake.” We have to admit, that line was pretty clever, but as the rap goes on, Eminem begins to tear into people more and just basically takes it too far…

Can't even say I'm surprised that Eminem is still using homophobic slurs in 2018 bc he's a fucking child but Justin Vernon, what the hell are you doing on the track man. pic.twitter.com/z2ySJBNF85

If the lyrics weren’t already bad enough, Eminem actually CENSORED out *that* word, which implies that he knows exactly how offensive that word is, and that it is a homophobic slur. Like, if you know the word is offensive, why use it? I will never understand how people say that they didn’t know how a slur or disrespectful term was rude until they used it, but always say the term in such a cautious manner, showing that they know that they shouldn’t be saying it. We’re shaking our heads, Marshall, this is reaaaal low.

Good morning to everyone except Eminem who continues to say f*ggot in his songs https://t.co/DvUUYSpTi5

Tyler is still banned from the UK. Eminem headlined Reading festival last year with a back catalogue of lyrics about raping/killing women, mass homophobia, transphobia, misogyny, abuse of mentally disabled kids…. And don't even fucking talk to me about it being 'his character'. https://t.co/MiLwNi6Qgl

However, some fans of both rappers said that Tyler, the Creator, won’t even be phased by Eminem’s comment, as it’s just a word that he’s probably been called multiple times, and if he’s not going to be offended, then why should any of us?

I love @tylerthecreator but some of y'all are overreacting to the @Eminem diss. Do you guys seriously think Tyler gives a fuck if someone calls him a faggot? He used the word over 200 times in Goblin. I doubt Tyler would take offense to this.

Although, this term is highly offensive, and no matter who you’re aiming it at and whether they’re going to be cool with you saying it, you still shouldn’t even have it in your vocabulary. It’s a disgusting word, and the fact that people like Eminem use it, and people continue to defend him about it, only shows how there’s not much recognition surrounding how horrible these terms are and when famous people use these terms, it influences others to say it too…

A nine year old boy killed himself just last week because of homophobic bullying so a mainstream rapper suggesting that word is acceptable to use in that context is kinda fucked up wouldn’t you agree Wiggles https://t.co/5xpyIbFm86

Eminem calls Tyler the Creator a ‘faggot’ on new album and here’s why he’s about to defend this usage AGAIN even after being dragged in 2013 pic.twitter.com/Z6b40adu36

Eminem: “Tyler the creator is gay and that’s bad”

Honestly, the song, and the whole album, isn’t even that great, and personally, Eminem is cancelled in my books. We hope that others see how damaging these words can be to others, and no matter who you are, offensive terms like this should never be used.

Do you think Eminem was in the wrong, or are people getting upset over nothing? Let us know in the comments, or on Twitter at @WhatsTrending.