And the wedding goes to... 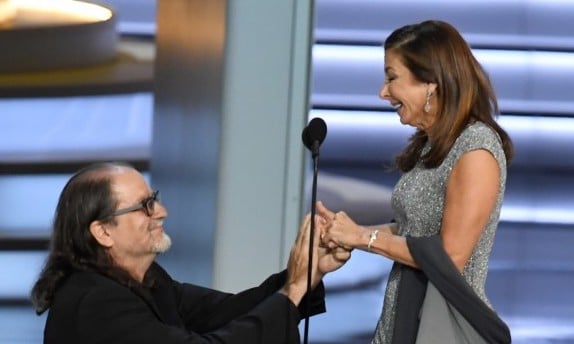 I love the proposal but you have to wonder what would have happened if he didn’t win the Emmy.

Normally the Emmys can feel, like any other Awards show, a professional extravaganza free of this weight we call “emotion”. Well, one person brought the heart and the love to the Emmys, and it was Glenn Weiss. Glenn Weiss went up to accept his Emmy for “Outstanding Directing of a Variety Special” for directing the Oscars, which is pretty cool in and of itself. However, it was not enough for him. When thanking those who’ve helped him he thank his significant other and said “Do you know why I don’t like to call you my girlfriend? Because I want to call you my wife.”

Weiss then got out his mother’s engagement ring, got on one knee and asked his girlfriend to become his wife and the Emmy’s room was aghast! Leslie Jones was shook, Sterling K. Brown couldn’t stop laughing — heck, there was footage of all of these glorious reactions caught. And the proposal too of course! Check it out!

That proposal was so beautiful. I hope they do the ceremony in Act 8. #Emmys

What do you think of the proposal? Let us know in the comments or on Twitter at @WhatsTrending.

VIDEO: Fortnite Cause of 200 Divorces in UK