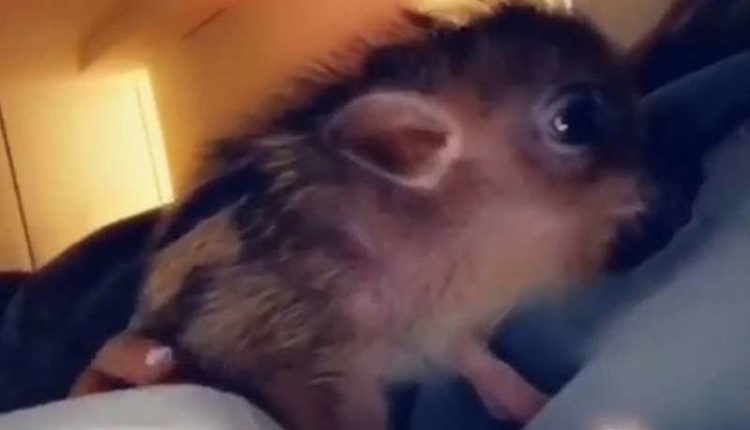 The break up in the whirlwind romance between SNL cast member Pete Davidson, and ex SNL musical guest Ariana Grande (we give people value by their roles on SNL now, no more, no less), has left fans of this insanity reeling. There were so many unanswered questions. When did this duo actually begin dating. Was there ever a chance they would get truly married? Was it young love, tired, true and meant to be indulged in, or foolishness meant to be avoided? Also, what happened to the pig? They had a tea cup pig? What happened to Piggy Smallz!?

just after she shit on my pillow ?

What… shall be the fate… of Piggy Smallz!?

Well, look, I won’t keep you in too much suspense, Piggy Smallz, the pig that Ariana Grande and Pete Davidson got to celebrate their quick and holy future ununion, will be staying with his mommy, which in this case is pop star Ariana Grande. Davidson got the pig tattooed on himself as one of the many now probably regrettable tattoos that both parties in the break up got, including Pete Davidson’s Ariana Grande logos (one of them has been replaced with a heart) and Ariana Grande’s tattoo of Pete Davidson’s late father’s firefighter identification number (uhh… we’ll see what she does with that, I guess.)

Part of the reason Grande kept the pig, according to TMZ is she originally bought the thing, which is also why, again according to TMZ, Grande gave Davidson back the engagement ring. It was his and there was no wedding. Alright.

So there you go. If you entered your Tuesday anguished over not knowing who got to keep the very cute pig, wonder no more. No you can go on to your lives, to your families, look your children in the eye and tell them “Ariana Grande got to keep the pig named Piggy Smallz in the break up between her and the guy who breaks in every SNL sketch, Pete Davidson, well, good night my children and family, farewell.”

I’m no scientist. But I bet it went like that, right?

What do you think of this pig based drama? Let us know in the comments or on Twitter at @WhatsTrending.