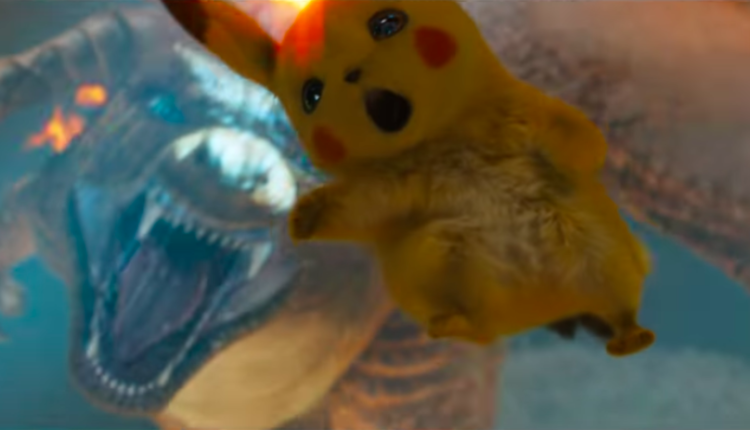 If you were a kid any time after 1995, one question has absolutely controlled you entire brain: what would Poke’mon look like in real life? And now the Poke’mon Detective Pikachu trailer gives us the answer: absolutely bizzare. For some reason. But man do we love it.

The movie, which was co-written by Marvel/ Guardians of the Galaxy mastermind Nicole Perlman, and directed by kids movie director Rob Letterman (Goosebumps and Shark Tale are amongst his victories), dropped its first trailer today giving us a look at the Poke’mon infested Rhyme City, our hero, a wanna be cop played by Justice Smith, his superior, played by Academy Award nominee Ken Wantanabe and– most importantly– Ryan Reynolds as Detective Pikachu. Doing exactly the same voice that he did for Deadpool.

So folks. If you wanted to know what Pikachu sounded like with Deadpool’s voice, this trailer’s got you.

Someone in a meeting absolutely said “This needs to be a DETECTIVE movie first and a PIKACHU movie second.” And that person deserves an Academy Award

The plot seems to follow Detective Pikachu and Justice Smith attempting to discover what happened to his father as they’re joined a by a girl with a Psyduck. The real star of the weird trailer however, for this writer at least, is the ridiculously realistic interpretations of the Poke’mon.

Me and the squad rolling into Detective Pikachu pic.twitter.com/ONlcnLexnU

I mean look at this! Did you ever think that Jigglypuff is covered in fur!? Or that Pikachu would look quite so squirrel like? This is cool, I will admit, it’s growing on me since I first watched the trailer and reacted with horror– but look at these models from the offices of Legendary Pictures, which produced the movie! No natural creatures be these!

He walks up to a mirror. Tears running down his face.

He grabs a THUNDERSTONE from a dresser drawer and holds it to his temple.

DETECTIVE PIKACHU (to self)
I’ll do it, you son of a bitch.

Here are some stills from the trailer below! Here you will see Greninja, Charizard, Bulbusaur, Psyduck, Mr. Mime, Dodrio’s butt and much more that eagle/Fearow eyed viewers will be able to see. And look. Poke’mon is like– this is my favorite franchise on the planet. Let me write the next Poke’mon movie Nintendo! I beg of you!

The internet — most of them made up of Millenials and Gen Z types who wiled away countless hours on their GameBoys, GameBoy Colors, GameBoy Advances, DS’s, 3DS’s, smartphones and– as of this Friday, the Nintendo Switch, catching Poke’mon left and right– is losing its mind over the trailer and the Tweets are coming igh and coming fast. No one was ready for the talking PIkachu movie! No one!

"Forget it, Jake. It's Lavender Town"

*atop a satellite dish in South America, during a thunder storm. the criminal holds out his gun, looking*

*Pikachu appears behind him and slits his throat*

Pokemon Go to the scene of the murder

*10,000 volts suddenly course through the criminal*

Is the entire internet like this right now or do I just choose to associate with a very specific type of person? pic.twitter.com/MZRn1tnCcx

What do you think of the trailer for the Poke’mon Detective Pikachu movie? Let us know in the comments or on Twitter at @WhatsTrending.

VIDEO: Who Is Musician Billie Ellish?