Jon Hamm eats bull penis and does not reveal if it is comparable to his own penis. 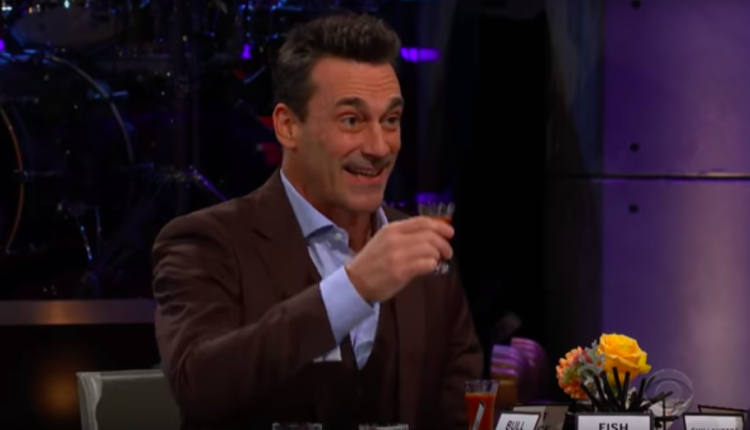 I’m going to say it now. My big controversial opinion. You know “Spill Your Guts, Fill Your Guts”? Where celebrities eat fish eyes to avoid talking about which Kardashian they hate or whatever? That show has such a fun premise, but most of these celebs often go for the gross eating rather than the gut spilling! I mean, I get it, eating dried bull penis is gross, but I guess it’s not as gross as having people know your vague penis size for the remainder of your show business career. At least that’s the quandary Jon Hamm was placed in during the fifteen minute segment of ‘Fill Your Guts, Spill Your Guts’. Many of the questions involved ranking peers, with three per person and six in total. From my count, there were five guts filled, and one spilled which is a pretty damn lame ratio in my humble opinion, but we did get to see Jon Hamm down two shots of hot sauce so that was something.

James Corden avoided answering which of his guests was his least favorite and ranking his fellow talk show hosts (which again, is easy — Colbert, Kimmel, Fallon, but I can see why maybe he didn’t want to say that Jimmy Fallon’s hair tussling of Donald Trump has forever made him an ally of neo-fascism and why Colbert’s improv chops beat out Jimmy Fallon’s “breaking in SNL sketches” chops), so he ingested a dried up tarantula that tastes like dusty feet and a pudding made of blood, cow tongue and other bits of animal.

The climax of the sketch came when Jon Hamm was asked how big his “hamaconda” is, an absolutely stupid word that I only put in here for Google search purposes before I can comfortably say penis like a damn adult. Hamm refuses to answer and instead ingests dried up bull penis, as the legend foretold.

Thank you Jon Hamm. Thank you. You freak.

What do you think of this Guts Spilling, Guts Filling? Let us know in the comments or on Twitter at @WhatsTrending.