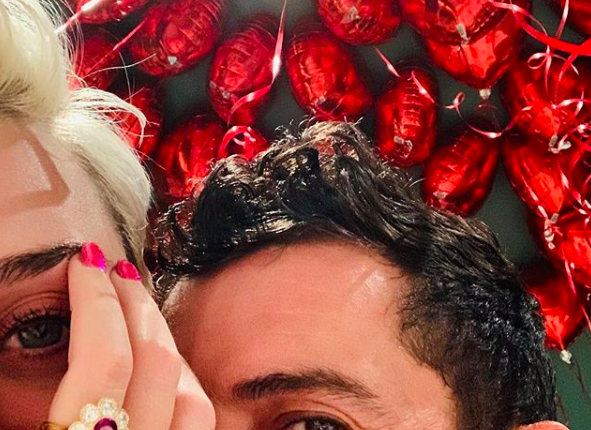 Well, well, well it looks like love can… Bloom!!!! Or what have you! In any case, Katy Perry seemed to have confirmed her engagement to Lord of the Rings and Pirates of the Caribbean actor Orlando Bloom in a photo of he singer standing in a heart shaped balloon adorned room, showing off an engagement ring, with the words “Full Bloom” written below it. Orland Bloom is of course right next to her, and the room is metaphorically, and thanks to the balloons, literally filled with the signifiers of love. Hey, if two hyper attractive, super rich celebrities can do it, who is to say there’s anything stopping us from finding the kisses we so deserve, ah?

The couple has been dating since 2016, and this will be the singer’s second marriage following her divorce from comedian Russel Brand. Perry’s mother, Mary Brand, has been posting photos of the couple celebrating their engagement, including pictures of Perry in a heart filled room, and a closer look at that engagement ring, if you want to take a look. You know, if that’s your thing. That’s okay. Take a gander. We won’t judge. The Facebook post below is courtesy of The Mirror.

I mean, it’s no Kenny G playing in a pool of roses, but it’s barely nothing, you know? I say we celebrate all forms of love, even if they don’t involve Kenny G serenading you in a pool of roses courtesy of Kanye West. Controversial, I know, but I go there where the mainstream media doesn’t dare to go.

But what do you think of the engagement? Are you excited? Let us know in the comments or on Twitter at @WhatsTrending, and check out our coverage of Orlando Bloom’s scandalous vacation pics above!

VIDEO: Did Chuck-E-Cheese Send Shane Dawson A Cease and Desist?