Kendall Jenner is receiving backlash for her marketing campaign with Proactiv, but she's not the first Kardashian/Jenner family member to get heat for a partnership. 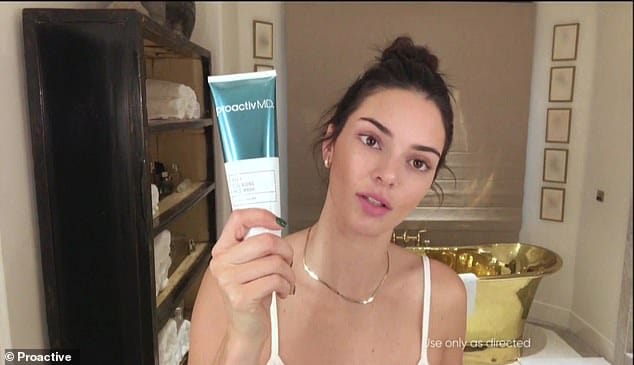 “I’m so proud of my darling @KendallJenner for being so brave and vulnerable. Seeing you share your most raw story in order to make a positive impact for so many people and help foster a positive dialogue is a testament to the incredible woman you’ve become.”

I’m so proud of my darling @KendallJenner for being so brave and vulnerable. Seeing you share your most raw story in order to make a positive impact for so many people and help foster a positive dialogue is a testament to the incredible woman you’ve become. Make sure to watch Kendall’s Twitter on Sunday night to find out what I’m talking about and be prepared to be moved. #bethechange #shareyourstory #changetheconversation #proudmom #finallyasolution #authenticity #mydaughterinspiresme #getready

On Saturday, Kris Jenner took to Instagram to encourage fans to keep their eyes on Kendall’s Twitter Sunday night. The world’s most famous momager boosted that her daughter was going to be sharing a compelling story there that night and that fans should prepare to be moved. What they got on Sunday night was a far cry from a star using their voice to help others. Instead, fans who were waiting to see what Jenner was opening up about were met with something the Kardashian’s are pros at: a marketing campaign.

We’ve seen this narrative with celebrities time and time again. Whether it be an Instagram post for a tea detox that Bella Thorne swears will give you a flat stomach, or a video of Kendall Jenner being completely authentic about her acne struggles that Proactiv saved, celebrities have long used the feign of empowerment and empathy to sell products.

In her new Proactiv ad, Jenner opened up about struggling with acne and what it’s like to have photos of your breakout go viral; a moment that would be tough for anyone, even the highest paid model in the world. Her story was real and vulnerable, and young girls around the globe can relate.

Despite her experience being true and opening up about it is vulnerable, Jenner ended the story giving Proactiv credit for clearing her skin. Many felt it’s a stretch someone with the best dermatologists in the world at her disposal cleared their skin simply using one product. The idea of someone leading fans to purchase a product that may or may not work and using a huge media stunt to do so left a bad taste in many fans’ mouths.

hi I’m kendall jenner, the highest paid model in the world, I didn’t know this before but apparently I use proactiv now. uh yeah… don’t tell my dermatologist I said that

Kris Jenner: my brave daughter Kendall is going to reveal her most raw and personal story on Sunday. Prepare to be moved.

Kendall: I have acne and I’m the new spokesperson for Proactiv. pic.twitter.com/g32DuCqKG0

Kendall jenner: “I can honestly say that the magic was proactiv”

She says as she leaves her Beverly Hills dermatology office pic.twitter.com/plw3z8mSO5

wait so….. Kendall Jenner's big “raw” announcement was that she has acne and is collaborating with Proactiv…?? Ugh pic.twitter.com/1Dig1Ix8dZ

Jenner is not the only girl in her family to do this. Her sister, Kim Kardashian, has been getting heat for years for promoting products that she claims will help empower women. One of the most controversial of her partnerships is FlatTummy.

#ad Fuelling up with my @flattummyco meal replacement shake before getting my workout done today. You guys need to do yourselves a favor and get on these Shakes because I’ve been seeing some seriously good results. I’m doing the Green Tea Matcha Shake which is part of the flat tummy bundle program. If you’re looking to give yourself a tummy makeover too, check these guys out because their 20% sale is on right now!

The brand sells teas and lollipops as weight loss tools and the mom of three has encouraged women to use them as a part of their own “fit” journey.  The appetite-suppressing lollipops are made with sugar and satiereal, a “clinically proven safe active ingredient extracted from natural plants” that is used to satiate appetite and can contribute to weight loss, according to a study published by PubMed.

While satiereal has been clinically proven to suppress appetites in rats and a handful of human test subjects, Dr. Kumar, an endocrinologist at the Comprehensive Weight Control Center at New York-Presbyterian/Weill Cornell Medical Center told Refinery29, “claiming that a lollipop will lead to appetite suppression or weight loss is probably a little extreme.”

While the legitimacy of these lollipops is of concern, fans were also angry that Kardashian would even promote something as dangerous as an appetite-suppressing weight loss tool. Actress Jameela Jamil even tweeted out about the Kardashian’s promotions after Kim posted with the lollipop saying “[You’re a] terrible and toxic influence on young girls. I admire their mother’s branding capabilities, she is an exploitative but innovative genius, however this family makes me feel actual despair over what women are reduced to.” 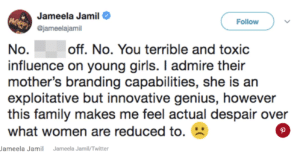 But what do you think? Do celebrities take advertising too far? Was Kendall’s build-up to the campaign drop too much and misleading? Let us know in the comments below and be sure to follow us on Twitter at @WhatsTrending.