These two are a better match than Chrissy and John... 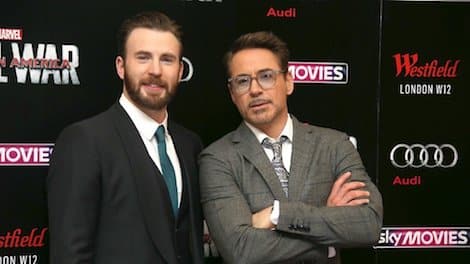 Married couples usually share many inside jokes, and sometimes, the celebrity couples of the world let us have a little sneak peek into their jokes, by posting about them on social media. From Chrissy Teigen and John Legend to Blake Lively and Ryan Reynolds, these couples sure know how to find the humor in everyday life. However, the latest ‘couple’ to share their personal inside jokes, aren’t really a couple at all, but the most famous Marvel duo to bless this world. Robert Downey Jr. and Chris Evans.

These two have a very precious friendship and whenever a picture of the two pops up, it is admired like a masterpiece. Now, I know the saying ‘life imitates art’ reigns true in many situations, but this one hits the nail on the head. Robert Downey Jr. was looking through photos of him and his best friend when he came across one in which he thought that the two looked like two characters from Bambi…

All the way down to the eye color. pic.twitter.com/bUdp70z7bq

From the facial expressions to quite rightly put, the eye color, this comparison is extremely similar. Now there’s quite a large selection of photos of the two together, so it wasn’t very long before Chris Evans had his input on this discovery…

Did Disney make these two based on Disney characters? Not that we’re trying to get all conspiracy theory about this, but seriously, they’re the exact same! All jokes aside, the similarities are uncanny. Also, the fact that the two are exchanging tweets about which fictional duo they remind themselves of (like they’re some really loved-up couple) is so cute.

chris evans really took his time to collage a photo of him and downey with a buzz and woody parallel This man really is the #1 RDJ stan i am sobbing pic.twitter.com/OYWq4dO1jj

evans and rdj look like a really married couple tweeting each other stevetony content, i love this concept

It’s a great explanation as to why the two are so close, and it really does show how much love they have for one another. As many of their fans have said, these two are ultimate friendship goals.

Do you think Robert Downey Jr. and Chris Evans are a better duo than other celebrity couples? Do you think that they’re friendship goals? Let us know in the comments, or on Twitter at @WhatsTrending.