They really hit the nail on the head with this one... 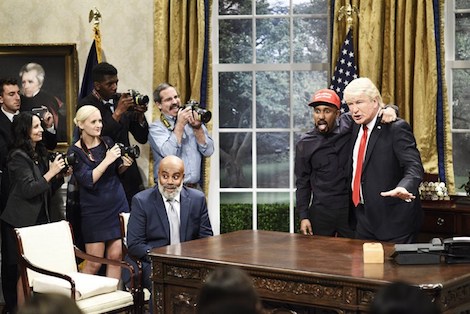 Saturday Night Live‘s latest sketch targeted Kanye West and Trump’s recent White House meeting, which was slightly strange and filled with odd comments. However SNL have once again hit the nail on the head, as this parody starring Alec Baldwin as President Donald Trump, Chris Redd as Kanye West and Kenan Thompson as NFL player, Jim Brown, could have easily been the real thing…

As the scene opened with a list of issues discussed during the ‘meeting’ such as, alternate universes, superman and flying cars, you knew it was going to be hilarious. Alec Baldwin’s reenactment of Trump’s pouty lip and condescending tone was spot on, whilst Chris Redd dumb downed Kanye’s character, by informing the crowd that he flew there by the power of his MAGA hat…

“I’ve got an amazing lunch to get to but first I’m sure that Kanye wants to make one or two brief, lucid remarks.” #SNL pic.twitter.com/pswawHDPf2

A few predictable jokes later, ‘Kanye’s’ metaphors and inspirational sayings had the crowd in tears. It was quick witted and straight to the point. It’s hard to believe that these actors aren’t the real deal, as the way they play their roles, is spot on.

After this sketch, Kanye and Trump are officially basted, roasted and burned. From Chris Redd saying ‘Let me put in my passcode. 0-0-0-0-0-0, I’m a genius!” to Alec Baldwin mocking Trump’s thoughts by adding, ‘Wow this guy can talk…he doesn’t listen to anyone but himself, who does he remind me of?” It’s a constant dig at the question – who is more mind numbingly stupid?

It was hilarious from start to finish and probably one of the best Saturday Night Live sketches I’ve seen. Spot on, SNL!

Do you think SNL’s sketch was hilarious or silly? Do you reckon they hit the nail on the head? Let us know in the comments, or on Twitter at @WhatsTrending.