No amount of web upgrades will get Tyler out of this situation... 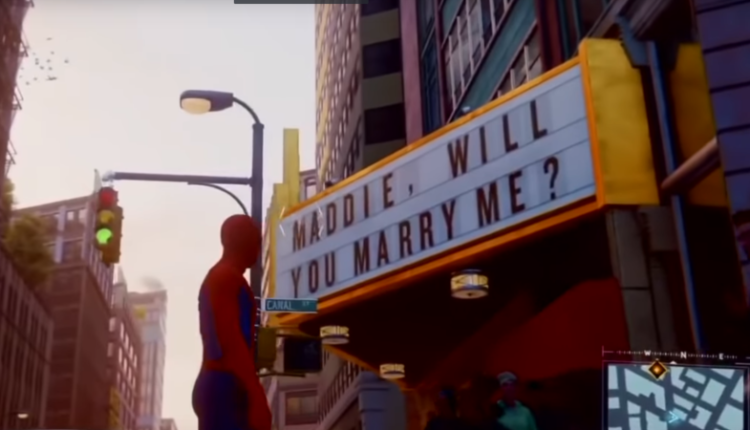 Spider-Man can do whatever a spider can, but his skills seem to be limited when it comes to matters of the heart — specifically other people’s hearts. As reported on Kotaku, Spider-Man fan and gamer named Tyler Schultz asked Insomniac Games to create a proposal for his girlfriend Madison, with Insomniac Games responding, “Who are we to say no to love”. The Easter Egg can be seen on a movie marquee inside the game, but there’s one problem… Tyler’s fiancee/ bride to be would never see the proposal, since she broke up with him, and a few weeks later began dating his brother.

Here is the initial Twitter request and an image of the proposal in question.

@EvanFilarca #spideysquad I need your help. This may be selfish, but I’m ready to propose to my girlfriend and want to do it in a big way. @insomniacgames @bryanintihar @BillRosemann is there anyway you can put an Easter egg of “Madison, will you marry me?” Anywhere in the game?

Well ok then, who are we to say no to love? DMing you and we will see if we can work something out 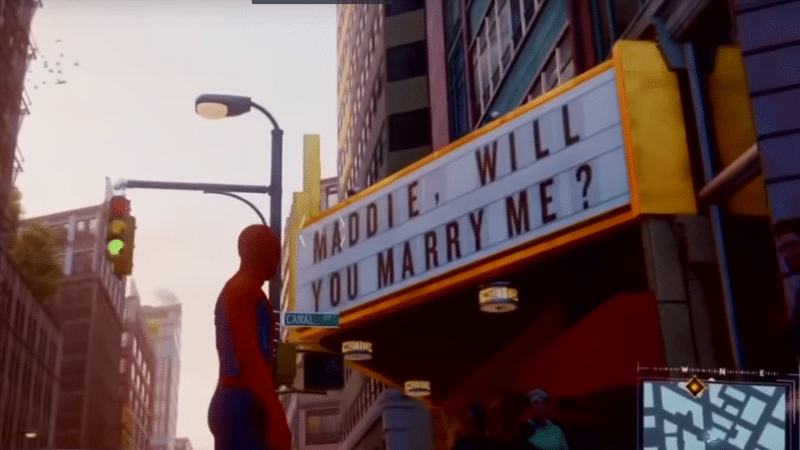 Madison gave her more nuanced side of the story to the Houston Press, saying:

“Our relationship was great for a long time, but I started to realize about a year ago that I was not happy. I kept it going because I wanted to make it work, but he has done some things that I realized I really shouldn’t have forgave him for. Our relationship had issues both mentally and physically… He never understood me unfortunately.

Even the proposal which he thought was the save all of our relationship was never the way I would have like to be proposed to. I never liked video games, but I sat through them because I loved him. Our relationship turned into a mother and son relationship where I had to remind him about things, I had to deal with his financial mistakes, his violent outbursts etc. We never did things normal couples would do like go out, dance, parties, sit under the stars.

I told him in July that he had a month to change my mind and it didn’t happen, so I broke up with him… As far as his half-brother goes, Tyler had asked him to check in on me and ask me how I was doing after I broke up with him, so of course we got close. And our relationship just built from there. I did not leave Tyler for his half-brother and I have never been unfaithful to Tyler.”

Ah man. This all sounds sad and bad. Tyler! Come on! What are you doing! Why make a huge deal out of this! Don’t propose to your girlfriend in a video game if she’s not into them!

Jacinda Chew, the art director for Insomniac offered to do a patch on the game, erasing the proposal. At first Tyler said no, but then later asked for the marquee to be changed to the name of his grandmother who recently died from cancer, and gave Tyler his first Spider-Man comic (Amazing Fantasy #15) thus inspiring his love for Spider-Man.

Also… they were together for five years after being 15!? There people are both 20!? Guys, don’t get married before you can go into a bar, come on. None of that is good. What would Spider-Man say? Spider-Man would be embarassed I think. Come on. Why do that to old Peter.

What do you think of this messy drama that old Spider-Man got… webbed… into? Let us know in the comments or on Twitter at @WhatsTrending.

Vets Reveal What Pets Think in Their Final Moments