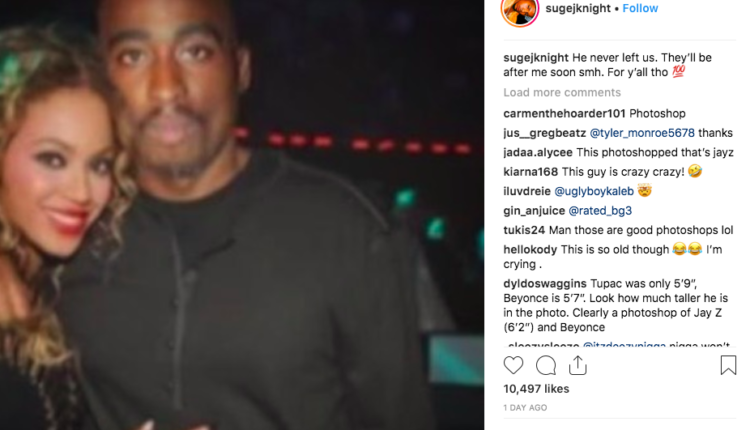 Suge Knight’s son, Suge J. Knight, released a series of questionable Instagram posts where he claimed Tupac was alive, and that shadowy forces are going to take him out for reporting on this. These posts are taking place only a few weeks after Suge J. Knight’s father, Suge Knight, was sentenced for vehicular manslaughter, and in the same year that the LAPD was close to discovering who killed the beloved rapper in 1996.

The posts, which were reported on on People.com, appear to indulge in the popular conspiracy theories involving Tupac’s life since his death in 96, with the first post being well, fairly self explanatory.

Suge J. Knight continued to post cryptic Instagrams showing photos of Tupac, and claiming that they’ll be there for him soon.

Suge J. Knight then posted a video of him looking scared of this shadowy organization, and then posted defensive Instagrams claiming he is NOT on drugs and then… claiming he killed someone in self defense? It gets a little vague from there, but it does include a probably photoshopped photo of Beyoncé and probably Jay-Z and with Tupac’s head pasted on.

The Instagram continued with more Tupac related posts and videos, including photos of the rapper, and finally the claim that he is living in Malaysia. Who knows why this was all posted. Maybe it’s all just fun, maybe it’s all just to keep the exciting myth of Tupac’s fake death alive as it slowly slips out of the public consciousness as time goes on. Either way… it’s interesting.

I Got my team with me.

What did you think of Suge J. Knight’s Instagram posts? Do you think Tupac is alive? Let us know in the comments or on Twitter at @WhatsTrending.