Callum Morton's "Monument #32: Helter Shelter" will have you believe you can take a nap instead the president's garbage head. 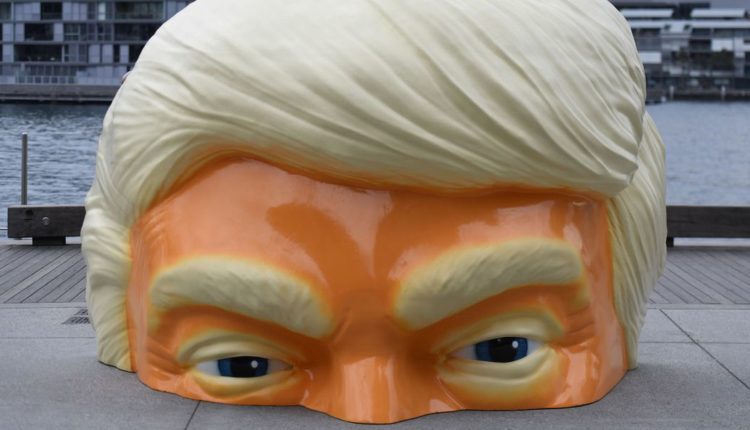 We’ve had our fair share of massive surprise Donald Trump art installations. From the Giant Chicken behind the White House, to the big baby balloon, we have had no shortage of work that celebrated and mocked America’s hackiest punchline and currently biggest problem. Well, have a new one to add folks. Much like the Poke’mon Diglett rising out of the ground — Sydney’s latest art installation gives us the impossible. The unspeakable. That’s right, folks. We’ve got Donald Trump’s big dumbass head rising out of the ground. And folks, it’s hollowed out. You can sit in it. It’s fine.

The piece is by Callum Morton, and is titled Monument #32: Helter Shelter. The title invites comparisons to Charles Manson, and the inside of the head is empty but engulfed in flames, allowing bored visitors to sit in Donald Trump’s awful head and check their phone, in the truest homage to our embarrassing export.

“‘Monument #32: Helter Shelter’ is a piece of temporary minor architecture, akin in scale to a bus shelter or a parade float. Half of the shelter bears the unmistakable characteristics of Donald Trump rising out of the ground and the other half forms a space for seating and cover from the weather. This voiceless, hollowed out, fun fair head, that reminds one of the famous Luna Park entrance across the harbour, conscripts the image of the current American President to play a role in our everyday lives by providing a place to rest and be protected.”

#Sydney pulling out the weird art today… ??#Barangaroo was full of confused people going “What the…” ?#trump #art pic.twitter.com/HQewUQJUAv

For now however, if you live in Sydney and want to sit inside the empty fiery head of a guy who stared right into an eclipse, then this statue is for you. What do you think of the statue though? Let us know in the comments or on Twitter at @WhatsTrending.