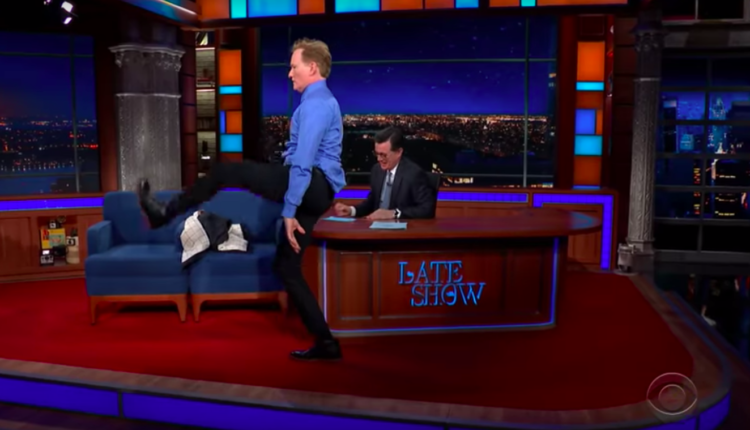 Conan O’Brien is making a renewed splash in our consciousnesses, forcing us all to go: “Oh man, this guy really is the best, huh?” Conan returned with a sharper and sleeker half hour format, a podcast (“Conan O’Brien Needs A Friend” from Earwolf), and a sharper, more grounded, and often wonderfully nihilistic persona. All of this was on display when Conan O’Brien went on The Late Show with Stephen Colbert after the Super Bowl, and proceeded to put a bow around his incredible stories about his feelings towards his body, which he showed off with great aplomb, and tied it off with the story of the DNA test that shocked his doctors.

The interview begins with Colbert running through Conan’s resume, with Conan underlining each and every credit with some self deprecation, before talking about how odd his body can sometimes look to people watching. Conan shows off his massively long legs, his small waist, jokes about how his dick must be somewhere on his chest, and compares his look to that of a long legged bird wading through an oil spill. Finally, Conan sits down and tells the story of his odd DNA test where the doctor was shocked at the results which were unlike anything else he has ever seen: that Conan O’Brien was 100% Irish.

The rareness of being 100% Irish is ridiculous. Most people in Ireland are only about 86% or 94% Irish, but Conan is a full 100%. And the reasoning behind it? According to Conan O’Brien’s doctor: inbreeding. It’s inbreeding, which Conan correctly affirms is… a little harsh. And while Conan’s brothers married people who are also completely Irish, Conan’s wife is 50% Irish, which Conan claims his brothers view with shock. Conan broke the Irish line! Exciting!

Are you a fan of stories about people’s DNA? Because if so, you will love the clip above, and love the new Conan show on TBS, which is unbelievably good. Here’s a sketch I liked from it a lot.

What do you think of the clip? Let us know in the comments or on Twitter at @WhatsTrending, and check out