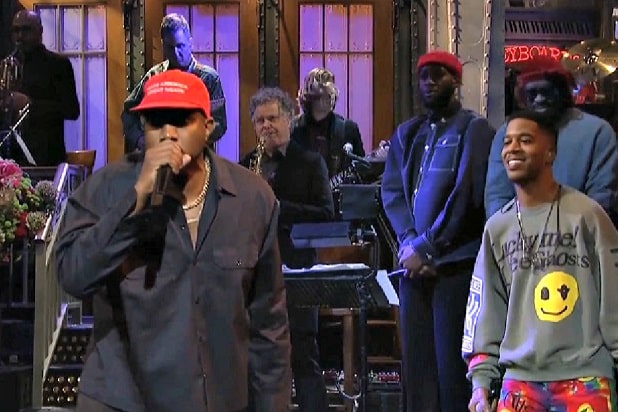 Kanye, in usual Kanye fashion, gladly made the SNL premiere, with the incredible introduction of Ego Nwodim, sadly about himself. Following an absolutely confounding and super censored performance of “I Love It” (which changed “you’re such a fucking ho” to “you’re such a freakin’ girl”), Kanye became the singular musical guest to get a third song over the SNL credits. Unfortunately, instead of singing, Kanye sang a few bars and then began doing the thing he seems to prize even more than his own musical talent – talking about himself.

The video first surfaced as snippets Instagram story from Chris Rock, where you can hear the audience getting annoyed as Kanye discusses a 2020 run–

What you didn’t see pic.twitter.com/rsXwdZ1e7I

How supporting a president who puts children in concentration camps is love is yet to be explained by Kanye West, but I’m sure if we said that to him he’d yell about how we’re censoring him. Meanwhile the children are yet to be reunited with their parents. Ugh.

Watch the video below:

The speech was well… mostly disliked– including by the cast. Michael Che and Chris Redd both expressed their distaste for the speech on social media — with Redd on Twitter throwing Kanye the middle finger, and Che on Instagram Stories talking about how the beat for “Ghost Town” that was playing under him is good (it’s true, it was good).

is it typical for a (co-) head writer to trash a guest like this pic.twitter.com/fOoOpqbKZK

Meanwhile, the usual sectors of Trumpist thinking praised Kanye, including Trump himself who pretended he doesn’t watch SNL and he described exactly what happened on it —

Like many, I don’t watch Saturday Night Live (even though I past hosted it) – no longer funny, no talent or charm. It is just a political ad for the Dems. Word is that Kanye West, who put on a MAGA hat after the show (despite being told “no”), was great. He’s leading the charge!

Meanwhile, Kanye went on Twitter and talked about amending the amendment that abolishes slavery, so you know, that’s the new normal. Kanye aligned himself with the alt right out of love (but really out of the love of wanting attention). Yeesh.

What did you think of Kanye’s weird speech? Let us know in the comments or on Twitter at @WhatsTrending.