I'm sure even Squee and Tobin, his weird work out buddies, would agree. 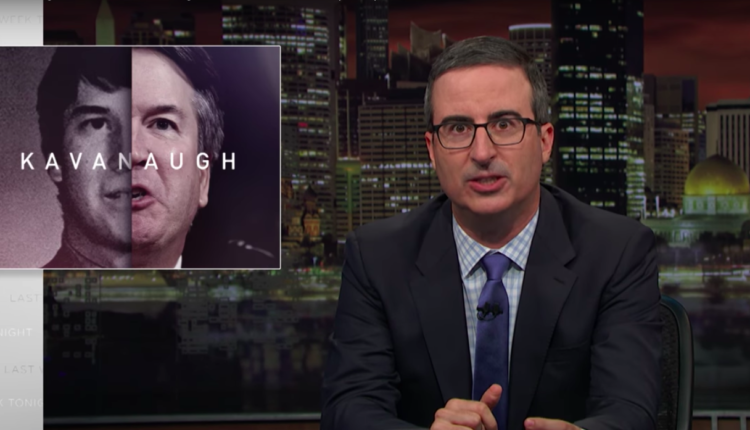 Look, it’s no mystery. Last Week was insane. So Last Week Tonight will definitely cover whatever insanity has just transpired. And sure, I’m sure John Oliver would love to cover Gritty, the repulsive hockey mascot, or anything else exciting and fun that happened over the last week, but until we can prove we are the kind of country that won’t confirm a serial sexual assaulter who bellows “I like beer” into the face of a sitting senator, then we have some work to do, don’t we? And John Oliver covers the harrowing and insane case for the entire half hour of his incredible show. Check it out below. We’ll be here when you’re done t break down what we just saw.

Much of what John Oliver talks about has been much discussed in recent days. Kavanaugh’s manic fevered ranting about beer and his friends Tobin and Squee have been targets of Saturday Night Live amongst other outlets including the human eye and brain, and of course the jaw hanging downwards as you can’t believe someone up for the job of Supreme Justice would act like this.

John Oliver did cover certain observations — like, did Kavanaugh imply that his father read a fourteen year old Brett Kavanaugh his calendar? And did he do so on Christmas? Because if so that is a pretty sad Christmas!

The video then explores just how bad Kavanaugh’s temperament for the job is, and more importantly, stares face to face with one grim and foreboding fact: that there was a fear that the GOP wouldn’t believe Christine Ford, but the reality is almost worse — they believe her, they just don’t care, and the entire Kavanaugh nomination is just to own the libs. Which may very well be true.

Oliver then promised that if Kavanaugh is somehow actually nominated to the Supreme Court, he would not be played by a dog on his show, as the other Supreme Court nominees are, but be played by a disgusting creature wrestled from man’s darkest imagination. That’s right. We’re talking Gritty, the Philadelphia Flyers’ mascot.

What do you think of John Oliver’s piece? Let us know in the comments or on Twitter at @WhatsTrending.

VIDEO: What’s The Story Behind BOWSETTE?