Donkey Don Doug would be proud. 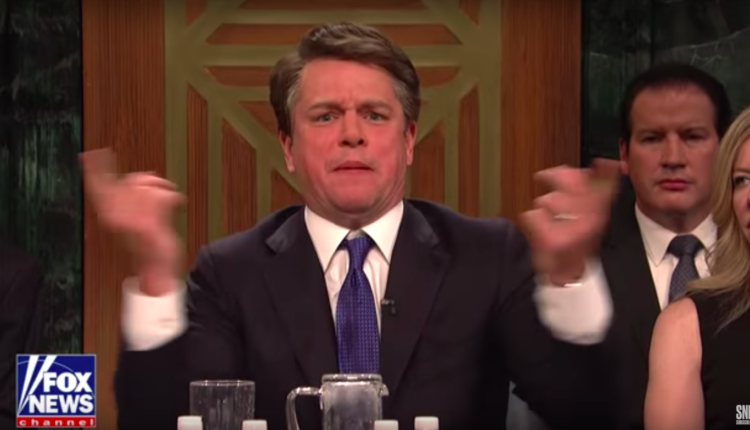 On the one hand, it doesn’t seem to help the legacy of SNL’s new cast that it puts so much effort into procuring big celebrities to play members of the Trump administration. But then again, you can’t argue with the results, and Matt Damon’s sniveling and frantic portrayal of Brett Kavanaugh complements the original and real sniffling, weird and depressing Brett Kavanaugh quite nicely.

The sketch is effective. Matt Damon portrays Kavanaugh as how he came off, as a sniveling weird crying clown, saying “I’m going to start at an 11, and then I’m going to get to a 15 real quick”, and going in on his weirdly named friend, Tobin and Squee alike, who he did not show the speech. Added Damon’s Kavanaugh “I wrote it last night, while screaming into an empty bag of Doritos”.

The sketch is incredible, painting a grotesque painting of high school party creep Brett Kavanaugh, who calls himself a “keg half full” kind of guy. Damon additionally takes out his “beautifully creepy calendars” and adds a new creep friend — Donkey Don Doug. All sniffling and crying as a paper cut out of Alyssa Milano stalks behind him.

Damon’s Kavanaugh manically adds that he will not pull out of the nomination, and that “I don’t know the meaning of the word stop”. It is an amazingly grotesque performance, the kind that the figures of the Trump administration don’t just deserve but demand, as just a glance at the real Kavanaugh shows that Damon’s performance only made silly what was initially absolutely ugly and disgusting.

Also, Rachel Dratch was in the sketch as Senator Amy Klobuchar, so that’s a treat!

What did you think of the sketch though? Would someone from the main cast do a better job? Let us know in the comments or on Twitter at @WhatsTrending.