VIDEO: WTF IS GOING ON With the Cardi B v Nicki Minaj Feud?!?

This beef is escalating to a whole new level! Here's all the deets from the beginning. 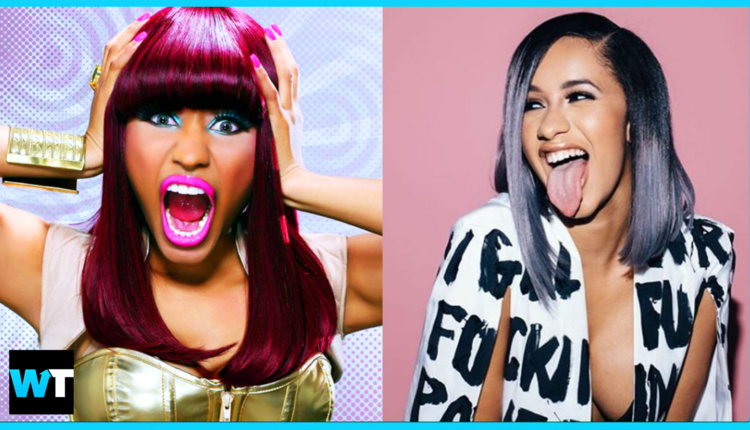 Cardi B is in some hot water after the T Nicki Minaj just spilled. Nicki Minaj is gearing up to release her next album, Queen and she has been starting some drama on her ongoing Beats 1 show, Queen Radio.

Nicki and Cardi B have been feuding for a while, most notably coming to a head publicly at New York Fashion week when Cardi threw a shoe a Nicki Minaj.

Well, on episode 10 of Queen Radio.. Nicki finally took the opportunity to provide some context to the situation.

But, first, let’s look at all the events leading up to this battle of the divas. Nicki Minaj hit the scene in 2007, with her mixtape Playtime is Over. After signing with lil wayne’s label Young MOney Entertainment, she released her hit record Pink Friday in 2010.

Cardi B came along 5 years later when she appeared on Love and Hip Hop New York and really broke out with her release of Bodak Yellow in 2017. By that time, Minaj had became the only artist to win the BET Award for Best Female Hip-Hop Artist for five consecutive years, and was relatively unchallenged for that spot.

But as Cardi B’s popularity rose, so did the drama between the two.

In March of 2017, an eagle-eyed fan caught Nicki Minaj liking a comment that dissed Cardi B’s bars. Later, fans spotted what appeared to be a dig at Cardi in ‘No Flag’, which said:

“I heard these labels are trying to make another me/ everything you’re getting little h** is because of me.” But, Nicki claimed and still claims she did not write these lyrics about Cardi B.

But, the damage was done, and Cardi apparently started keeping now-husband Offset away from Nicki’s records. She even took a sly punch at Nicki during a performance. And even though the rappers stayed coy about their feud, the fandoms began attacking.

Fans of Nicki Minaj and Taylor Swift tried to keep “Bodak Yellow” from becoming #1 on the charts. Taylor’s fans started excessively streaming “Look What You Made Me Do”. But, their efforts were in vein and Nicki publicly congratulated Cardi on her #1 record.

Though it didn’t look like Cardi was too convinced. Cardi took a verse on the G-Eazy song “No Limit,” which many felt was a dig at Minaj, who’d been the reigning rap queen for the better part of a decade.

“My career takin’ off / These hoes jogging in place / Swear these hoes run they mouth / How these hoes out of shape? / Can you stop with all the subs? / Bitch I ain’t Jared.”

It seemed like the two were making up when both appeared in Migo’s music video for “Motorsport” . But, the fans weren’t having any of it. The barbz (aka Nicki’s fan base) came at Cardi for stealing Nicki’s style in the “No Limit” music video.

As Nicki began her Queen radio show, of course, one of the first questions was about her beef with Cardi B. She said:

“I didn’t know Cardi and I had an issue. To me, she may have taken an issue with things that I’ve said, but I’m not going to bite my tongue…You gotta have thick skin. People talk s— about me all the time. I don’t go around and tell people to stop posting me because I see one bad thing about myself.”

Cardi then blasted Nicki saying: Imagine subbing me but you blocked me from all social media.

Fans did some sleuthing and found out that Nicki did in fact block Cardi B on all social media.

That brings us to the height of all the drama –

During the 2018 Harper’s Bazaar’s ICONS Party, sources say there was a physical altercation between the two on the second floor balcony during Christina Aguilera’s performance. Cardi emerged with a large bump on her head and now Nicki is telling her truth about what happened, saying “There is surveillance footage where the assault took place… Rah hit her bad.”

Rah Ali is a member of Nicki’s entourage and is most widely know from Love & Hip Hop.

Cardi later wrote: “I’ve let a lot of s— slide! I let you sneak diss me, I let you lie on me, I let you attempt to stop my bags, f— up the way I eat! You’ve threaten other artists in the industry, told them if they work with me you’ll stop f—ing with them!! I let you talk big s— about me!!”

Cardi’s sister, Hennessy Carolina later claimed the Nicki had leaked Cardi’s number to fans, which caused many Barbz to start harassing her.

Cardi said on her show: I’ve never leaked a number in my life

Cardi has since responded with an onslaught of instagram videos detailing her side of the story, but really, it looks like all Nicki wants is to be left alone.

So what do you think about these feuding celebs? Let us know in the comments or on Twitter at @WhatsTrending