Damn Twitter, back at it again with the conspiracy theories??? Well, in short, yes. Twitter has once again been swept into the conspiracy theory train and this time it is all things related to the health of President Trump, and more specifically how it’s failing. Now don’t get your hopes too high just yet. Absolutely nothing here has been confirmed, but it is certainly interesting to investigate what has been happening and why people think the 45th president is on the decline.

The conversation began last week when a photo of President Trump went viral on Twitter with what appeared to be a giant ‘IV Bruise’ on the back of his hand. The discoloration of unknown origin was particularly noticeable for those who have been paying attention and saw that it was not on the President’s hand earlier in the week during other appearances. 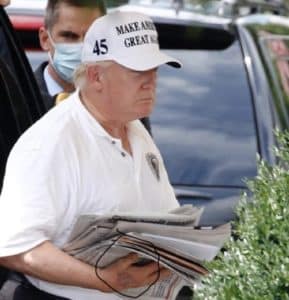 This photo comes on the heels of an investigation by the Inquisitor in late July also regarding the possibly failing health of President Trump. After visiting a lab in North Carolina in late July a video went viral along with speculation that the president was ill because of a limp on his right leg.

After the associated press released the picture people were quick to chime in with what they thought they were seeing, including a woman who claimed to be an ICU nurse at Walter Reed medical center in Bethesda, MD– where the president would have been treated.

Immediately the questions started flying? Why was President Trump holding something? Is it normal that President Trump was rushed from a golf course to a hospital? What does it all mean? You know, the typical conspiracy theory questions.

I’m an ICU nurse so trust me – 45 has recently experienced a venopuncture for either blood work or an IV infusion of some kind. Only other possible reason for the large hand bruise would be a traumatic injury to the hand. There is no other plausible explanation.

Once the picture was already viral people were also quick to look for the finer details that would have been missed during the first surge of virality, even going so far as to criticize  President Trump in his previous appearances.

Thats a damn good point. He never carries anything, ever. Maybe a hat at most. With a whole staff with him, why would he be carrying newspapers that we all know he doesn't reas?

But of course, there are those who will call all of this a conspiracy theory. Including Doctor Eugene Gu on Twitter who wrote, “ I detest Trump. But making up conspiracy theories that he went to Walter Reed today because of a stroke without any actual facts and evidence to back up such claims is not helpful. Doctors must also stop trying to diagnose a stroke from video clips without doing a physical exam.”

But how do you feel about this whole conspiracy? Do you think the health of President Trump is failing?