President Trump is known for breaking the rules and being extremely open about expressing himself on Twitter. His tweets are offensive to some people and result in him receiving harsh backlash. Nothing has ever been done to stop his controversial tweeting before because of his special protection as President, which he takes advantage of. Unfortunately for Trump, once President-elect Joe Biden takes control of the office on January 20th, he will be losing all that special protection.

World leader accounts are treated differently than regular accounts on Twitter. If they break any guideline, instead of getting suspended or banned, Twitter places a label that informs the user what guideline that tweet broke. The tweet stays up and provides a link for users to educate themselves on the facts of a user’s claim.

Since 2019, world leader’s Twitter accounts have received special protection even when they break Twitter rules. This is because their tweets seem to be in the interest of the public, according to AP News.

Twitter’s special protection only applies to leaders currently in office and not former leaders. For example, former President Barack Obama no longer has that special protection giving him the right to post just about anything. He must follow social media rules in order to avoid getting banned. This includes hate speech, violence, or any false information.

If Trump makes a false claim after January 20th, he could face penalties that regular Twitter users face. These penalties include  removal of a tweet or suspension from the platform. This currently does not affect Trump’s Twitter account.

A spokesperson from Twitter said, “A critical function of our service is providing a place where people can openly and publicly respond to their leaders and hold them accountable… With this in mind, there are certain cases where it may be in the public’s interest to have access to certain tweets, even if they would otherwise be in violation of our rules.”

Once Trump leaves office in January, and falls into the “former” category, his special treatment comes to an end. That’s if he leaves since he’s refusing to concede and wants to remain President. President Trump is having a hard time accepting the fact that he lost the 2020 election to Democrat Joe Biden.

At the moment that Trump no longer has his protection, for every post that breaks the rules he gets a strike. When a user has multiple strikes Twitter freezes their account, suspends them, or permanently bans them. As President, Trump has had it easy considering he has multiple tweets blocked but still gives the user the option to view them or not. Trump puts Twitter in a difficult position with all his tweets and them deciding how it should be dealt with. 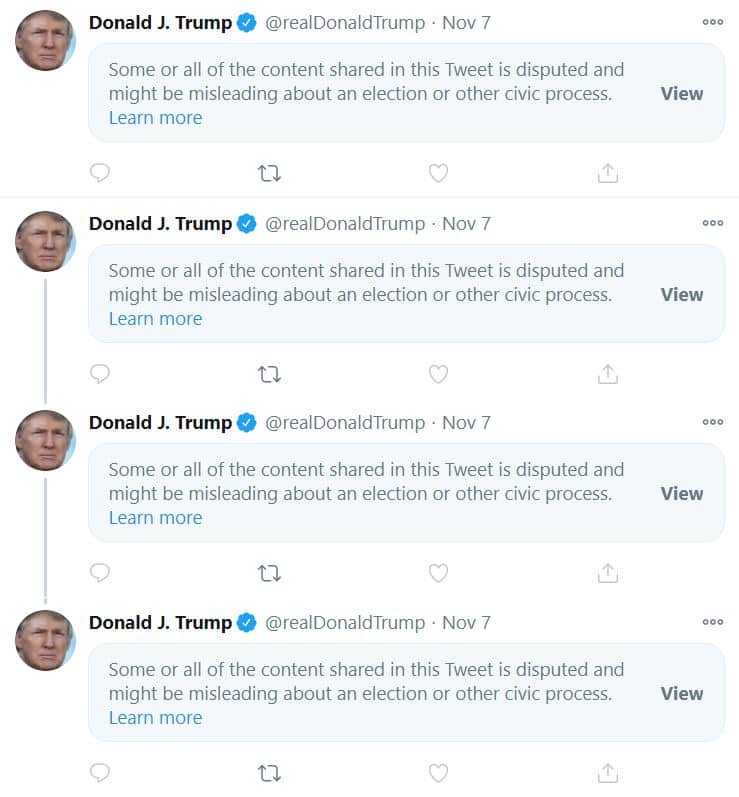 As seen on the screenshot above, warning labels appear on Trump’s tweets. The purpose of these warning labels is to prevent these tweets from spreading since they break the guidelines. During the elections, one of Trump’s tweets was hidden after receiving various retweets and likes in the matter of seconds before it was flagged. Once the tweets are hidden there is no retweeting without a comment or liking it.

This could also impact his Facebook account.  Facebook uses independent fact checkers to catch “the worst of the worst stuff.” Politicians currently in office are exempt from fact checking, however former politicians aren’t. They’re treated like regular users and could get banned for breaking their guidelines. Although Facebook hasn’t commented or confirmed anything, there are some policies concerning politicians.  Policy says, “former candidates for office or former officials continue to be covered by our third-party fact-checking programme.”

When Twitter started labeling Trump’s tweets back in May, Mark Zuckerberg, founder and CEO of Facebook, said that Twitter and other social media platforms shouldn’t fact check political speech.

Most people blame social media for Trump’s actions and letting him get away with various posts. In addition, they want him completely banned from social media immediately.

Twitter users find it unfair and want Trump to have the same consequences as the rest of the user have. Being a world leader shouldn’t give him all the freedom on social media.

Sorry to say that is total BULL💩!
HIS OFFICE DOES NOT ENTITLE HIM TO ANY MORE FREEDOM OF SPEECH THAN ANYONE ELSE IN THIS COUNTRY! .@Twitter
Policies should pertain to Trump & anyone else equally!!!

Twitter users think Twitter handles others harshly when breaking the rules. It was surprising to some knowing that world leaders get strikes. Some users think that Trump will never get banned from social media.

This would theoretically happen in January if and when a new President is inaugurated.

FWIW I don't think it's very likely at all that Trump is ever banned. It's rare for platforms to ban users entirely. But I think the other forms of enforcement are possible.

People have been happy finding out that they might not be seeing Trump anymore one social media. But will this actually happen? Will Trump be banished from Twitter? Guess we will have to wait until January 20th. We will also have to wait and see what other social media outlets say about Trump’s account.