QAnon theories have made their way into the yogi world. The far right conspiracy theory group has left the rest of the world stumped as to how they have managed to influence this so “anti right” seeming group.

The right wing group has grown more and more popular in recent months. QAnon is a somewhat organized group of people who believe in “unsubstantiated beliefs” that center around the belief that Satan worshipping people, aka Democrats, politicians and journalists to name a few, have controlled the state of the government with the “aid of media and entertainment outlets.” QAnon believers typically target people in positions of power, or celebrities, to attack because they believe that a person can only achieve that level of power by doing morally corrupt things, such as pedophilea, as a trade off.

QAnon conspiracy theory states that there is a battle between good and evil. QAnon believers think there will be two events to come; the Storm, a mass arrest of people who hold positions of high power, and the Great Awakening, an event where everyone will have an epiphany that QAnon theory was right all along. Upon the Great Awakening our world will enter a new stage of utopia.

How Yogis Are Being Influenced

It seems that QAnon has dropped some of their political messages in order to target less politically charged communities, such as yogis and lifestyle influencers, and as a result more women. Insider explains that in March, when coronavirus was starting to set in in America, a few yogis seemed skeptical about the severity of the virus. Later in April those same yogis were suddenly spouting ominous messages that the virus might be a hoax. These lifestyle influencers and yogis who were once solely focused on love and happiness were suddenly talking about child exploitation, sex crimes, the devil and an impending war. Unlike QAnon’s usual demographic of Trump supporters, these yogis have accepted QAnon’s message without the political aspect.

Many yogis and wellness influencers who have been influenced by QAnon beliefs speak about saving the children. While many do not claim they are QAnon supporters, they post about their “awakening” in regards to what is happening with human trafficking. Insider mentions Conspirituality, a podcast that follows the rise of QAnon in the yogi world. The podcast lists yogis such as Jane Allen Chaisson, Stephanie Birch, and Bizzie Gold as yogis who support the QAnon movement, although most or all of them have denied being identified with QAnon. Bizzie Gold even told Insider that categorizing people as such [QAnon believer], “feels like a witch hunt.”

This QAnon infiltration into the yogi world has been dubbed “pastel QAnon” by Concordia University doctoral candidate Marc- André Argentino,  because the harsh messages are clouded by softer images and language. The toned down images and language make the QAnon messages more approachable and easier to normalize.

Followers of these yogis were particularly alarmed when they noticed the shift in messages.

Some are particularly upset, claiming that just by believing some of the rhetoric of QAnon, you are by default a Trump supporter. This Twitter user states that these are not the beliefs of true yogis.

The rise of QAnon and Plandemic BS among yoga teachers is so disturbing. You are not a #yogi if you vote Trump. #yoga is social justice. If you vote trump, you are someone who does some stretching in the gym. At least be honest with yourself.

Onlookers are quick to notice a similar slippery slope pattern with those who enter the “yogi world.” This Twitter user thinks it makes sense that those who are more open to abstract ideology, such as more spiritual yogis are, would be more likely to buy into the conspiracy theories fueled by QAnon. She warns others to not be “so gullible.” 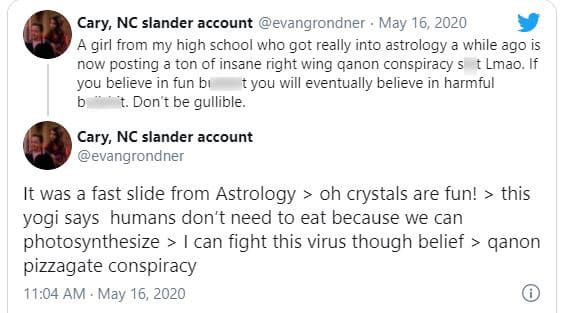 The rising attention being drawn to QAnon infiltrating the yogi world has urged other wellness and yogi influencers to take a stand. Influences noticing what was happening around them in the wellness community, took to their social media platforms to share a joint statement.The statement explained that QAnon is not representative of the wellness community, and that their followers should always do their own research and be skeptical of the real motives behind QAnon postings.

This statement was released prior to the presidential election most likely because many worried that this sort of infiltration was causing a communal divide reminiscent of party divisions that happened because of the media during the 2016 election.

This is all fairly alarming for any followers looking to those yogis, expecting to get their daily dose of tranquility and motivation from them and instead being greeted by ominous messages inspired by QAnon. Most of the yogis from the Conspirituality podcast have not posted to their social media pages since the presidential election results came in on November 7th. Followers patiently wait to see whether or not the election results will change the beliefs of some of the QAnon influenced yogis.