The death of 33-year-old Sarah Everard has sparked serious conversations about women’s safety. The British public is mourning her death as the investigation continues after allegedly being killed by someone who is supposed to provide protection to people. 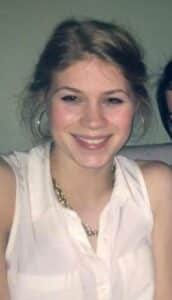 Sarah Everard was last seen on March 3rd on her way home from a friend’s house in South London. It was about a 50-minute walk back to her house but she never made it home.

The last known photo of Everard was around 9:30 p.m. where she was walking along a busy street. Her body was discovered a week later on March 10th. A police officer was arrested and charged with murder. Her case sparked protests in London as people are calling for action to address violence against women.

Everard’s case was one felt by women all across the world. It’s a harsh reminder that these situations are things that women have to deal with every day. Whether a woman has experienced this threat themselves or has known someone who has it is something that needs to be addressed.

A viral Instagram post by Lucy Mountain was a powerful reminder of why we need to put a stop to this. The picture is of a text message that says, “Text me when you get home xx.”

The caption is especially moving as she talks about how Sarah Everard’s case has affected her. “I haven’t been able to stop thinking about Sarah Everard and how a woman was not allowed to walk home. It’s unbearable,” she wrote.

She continued to write the most relatable sentence that all women have felt. ⠀

The fitness guru finishes by stating, “Stop harassing women. Stop victim-blaming women. And stop burdening women with the weight of other men’s actions. A woman should have been allowed to walk home.”

This post inspired so many women to come forward with their thoughts, feelings, and experiences.

The past two weeks since Everard’s death, women’s safety has become a national conversation. Hundreds of thousands of women have shared their stories. Something as simple as walking home alone has a brand new meaning for women and it can quickly become a terrifying or life-threatening experience.

Hashtags like #textmewhenyougethome and #Reclaimthestreets have been used to talk about violence against women and girls. People are trying to emphasize the urgent need to end this violence from men.

“Text me when you get home” has been second nature for women especially at night. Women share the things they do to ensure not only that they feel safe but their friends and family are safe as well.

The message is one the many women are accustomed to sending without hesitation — and almost as a default.

This insta post is sadly brilliant. 30 years old and this is still something me and my friends do. Without even thinking at this stage of our lives. Crazy. No one sleeps till the last person is home in the taxi! #TooManyWomen #TextMeWhenYouGetHome #UnwrittenRule pic.twitter.com/Ep29TIYlqy

These women shared helpful tips to use that can be used to help you feel safer. One of them is for Apple phones and the other is for Androids.

Trying to help spread awareness about this feature –

Some women discussed that not all violence is from men but too many of the situations are.

Yes it’s not all men. But it’s enough. I was taught to have strategies. Multiple risk assessments. Every womxn I know has a story. I got self defence class. Did the boys school do extra classes on not attacking women?
1/2 pic.twitter.com/PLvfXaGBcM

Many related to this tweet of situations she has dealt with and thoughts that come to mind.

The fact that I’ve thought about my escape route and whether I’ll be able to run in the shoes I’m in.

The fact that I’ve been harassed further and even followed for not responding to cat calls.

The fact that I’ve had a cab driver shut off the gps. #textmewhenyougethome

The phrase ‘She is all of us’ has been spread across social media to bring awareness to the situation.

What’s mental about the phrase #textmewhenyougethome that it became a habit, something girls/ woman just do when they go home alone late in the evening or night. pic.twitter.com/OSPHBqEZwd

Another user notes other things that are done to ensure the safety of women.

Do men realise women share their addresses – or the addresses of bars/parks/date locations – with each other on WhatsApp, to keep themselves safe? We set up calls with our friends, too. “If you haven’t heard from me by 11pm, call me. If I don’t answer, call the police.”

Many people have questioned how Metropolitan Police have handled allegations of previous misconduct by the police officer accused of kidnapping and murdering Everard.

Arrests were made at a London vigil for Sarah. Met Police stated that it was due to COVID-19 restrictions. They said in a statement that a small group of people wouldn’t comply with the demands to leave.

Sarah Everard’s body was found in a woodland area in Kent. Her family said in a statement how thoughtful Sarah was. “She always put others first and had the most amazing sense of humor.”

Protests and vigils are still going on as the police continue to investigate Everard’s murder. People are pushing for things to be done for violence against women.