In a story that echoes the now haunting Slenderman attacks, done by two teen girls, we have another story that involves violence from young middle schoolers for a horror based Satanic ritual. Two Bartow Middle School students in Florida have, after watching horror movies, devised a plan to attack and cut up fifteen peers smaller than them. They then were going to drink their blood and eat their flesh as part of their worshipping of Satan, according to the two children. The girls then planned to kill themselves so they could go to hell to be with Satan. Luckily the plan was foiled when, upon skipping school to enact it, one of the girls’ parents received an automated phone call informing them of the fact.

The girls were then found in the bathroom and were found to have four knives, two of them with six inch blades, scissors and a pizza cutter on them. Photos of the knives can be seen below. Additionally, a goblet, meant to drink the blood of their victims from, was found on the scene. 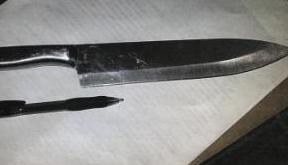 The plot involved waiting for smaller students to enter the bathroom and slaughter them, with researching having been done on the internet as to which kind of wound would cause them to bleed out the fastest.

Detectives also found a hand drawn map in one of the girls’ home that had the phrase “go to killin bathroom” scrawled on it, and poems such as “trying hard to leave./stuck in a endless abyss./claw a way out, now”. Another note read: “Today is health lessens thank Satan we’re doing this in bit”. A Snapchat between the girls said “I was thinking like stabbing ourselves in the necks.”

We will keep you update on this story as it develops.