The great cancellation of 2020 has taken another victim. It is none other than Avengers actor Sebastian Stan. The actor is being canceled on Twitter for blocking people who were trying to confront him about posts made by his girlfriend Alejandra Onieva.

The post in question was from 2018 and has since been deleted from Onieva’s account but not before several people had the opportunity to screenshot it and share it on Twitter. The photo (shown below) caused Onieva to be scrutinized for the costume that she and a friend were wearing for an “Asian Theme Night” back in 2018. 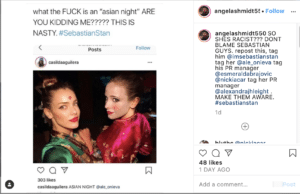 One of the people who obtained a screenshot was @Angela550. The Twitter user created an Instagram account specifically to repost the photo and share her feelings with Stan and Onieva. Her goal was to receive some kind of acknowledgment about the racism depicted in the post and ultimately get the post taken down. She tagged both of the stars, and instead of responding both Onieva and Stan blocked her.

In an interview with the DailyDot @Angela550 said, “I wasn’t posting this with any malicious or harmful intent. In my Instagram post, I made it clear not to blame Sebastian [Stan], because he most likely doesn’t even know about it. The tags were for her to delete the post. Many fans such as myself are upset because he felt the need to block us after we supported him for years.”

Other fans also tried to contact Stan about the actions of his girlfriend and it seemed as though almost everyone who made an attempt was blocked by Stan. The upset then led to #SebastianStanisoverparty to trend on Twitter.

Needless to say, people weren’t pleased with Stan’s actions but there were those who defended him and Onieva in their decision to block those Instagram and Twitter users.

i am once again disappointed but not surprised #sebastianstanisoverparty pic.twitter.com/Bz364rVcKM

y'all just forgot the meaning of life and start cancelling random people,, jesus just get some sleep#sebastianstanisoverparty pic.twitter.com/ll0bImkTRY