Argentina soccer legend, Diego Maradona, has died at the age of 60 after suffering from cardiac arrest. It was confirmed by the Argentine Football Association, which was posted on their Twitter account.

The caption is in Spanish but translates to… “The Argentine Football Association, through its President Claudio Tapia, expresses its deepest sorrow for the death of our legend, Diego Armando Maradona. You will always be in our hearts.”

Maradona passed away at his house in Buenos Aires. He developed an alcohol and drug addiction which led to a few health issues. Earlier in November, he was transported to the hospital for brain surgery. Doctors had discovered a blood clot on Maradona’s brain which required immediate treatment. He had a successful surgery and doctors expected him to make a full recovery. But no one would’ve expected for his life to take such a drastic turn two weeks after.

Who was Diego Maradona?

Maradona was considered one of the greatest soccer players of all time. He was captain when Argentina won the World Cup in 1986. Maradona took the field and made history with his amazing performance against England where he scored an iconic goal. His iconic goal was later called the “Hand of God.” As he made the goal he put some action to it. Maradona threw his hand over the goalkeeper into the net but never touched anything.

He scored both goals in the quarterfinals against England. The second goal was made after a 66-yard dribble as he passed five players of the opposing team (England). This is one of Maradona’s unforgettable performances.

Maradona later talked about his famous play in his book stating the following: “Now I can say what I couldn’t at that moment, what I defined at that time as ‘The Hand of God’. What a hand of God, it was the hand of Diego!”

Argentine President, Alfredo Fernández, commented on Maradona’s passing: “You took us to the top of the world. You made us immensely happy. You were the greatest of all. Thanks for having existed, Diego. We will miss you for life.”

It has been hard for everyone who knew Maradona, played with him, or even looked up to him. Brazilian soccer player, Pelé, is saddened about the loss of “a dear friend.”

“What sad news. I lost a great friend and the world lost a legend. There is still much to be said, but for now, may God give strength to family members. One day, I hope we can play ball together in the sky,” Pelé tweeted.

“A very sad day for all Argentines and for football. He leaves us but does not leave, because Diego is eternal. I keep all the beautiful moments lived with him and I wanted to take the opportunity to send my condolences to all his family and friends. RIP.” (https://www.instagram.com/p/CIBeukIlowA) 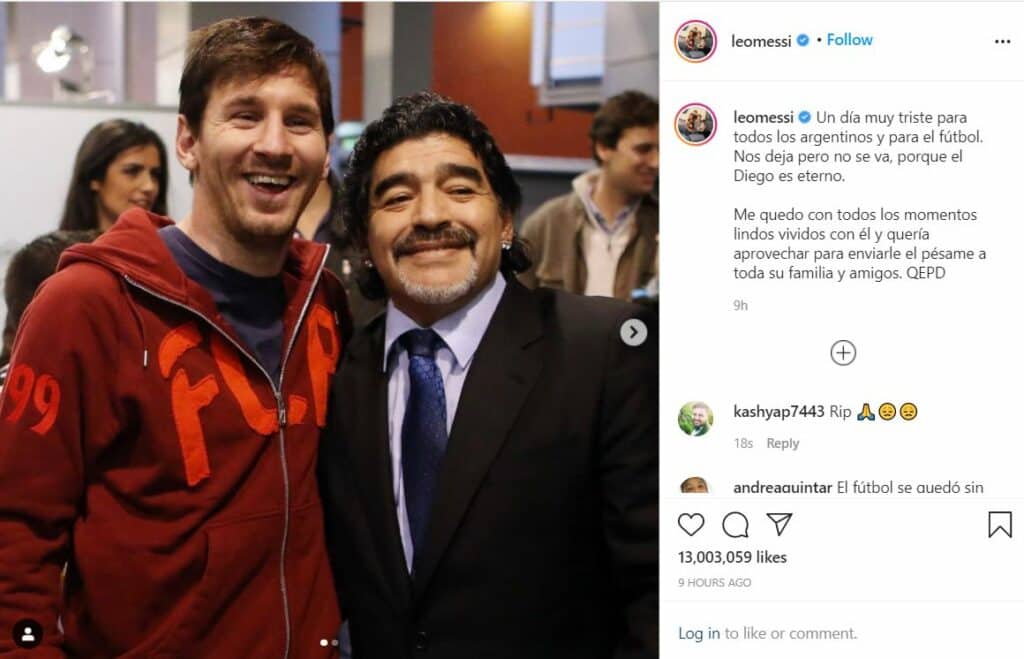 Christian Ronaldo said goodbye to his friend via Twitter. It translates to: Today I say goodbye to a friend and the world says goodbye to an eternal genius. One of the best ever. An unparalleled magician. He leaves too soon, but leaves a legacy without limits and a void that will never be filled. Rest in peace, ace. You will never be forgotten.

Neymar posted on Instagram: “RIP LEGEND!” Followed in Portuguese by this: “You will always be in our memories, you left your legacy. FOOTBALL thanks you. Rest in peace legend.”(https://www.instagram.com/p/CIBdIA8A3d_/) 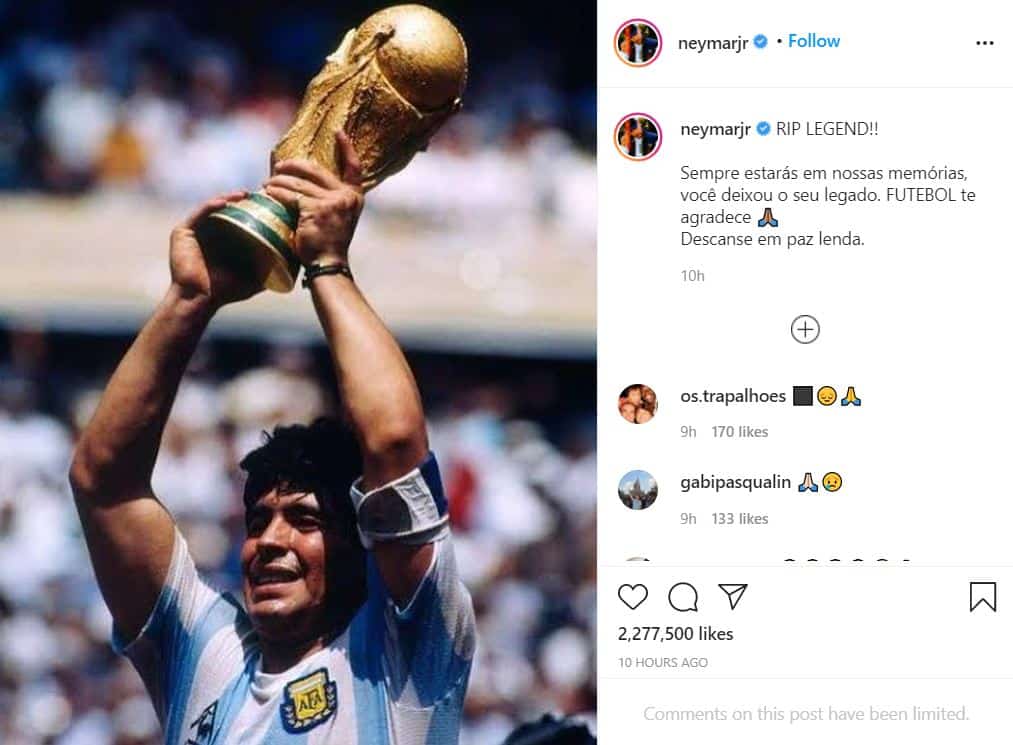 Argentina striker, Sergio Aguero, who was once married to Maradona’s youngest daughter also paid tribute to his ex father in law. “We are never going to forget you. You will always be with us.#GraciasDiego RIP.”

Former soccer player, Gary Lineker, commented: Deeply saddened to hear that Diego Armando Maradona has died. By some distance the best player of my generation and arguably the greatest of all time. After a blessed but troubled life, hopefully he’ll finally find some comfort in the hands of God. #RipDiego

Koulibaly Kalidou, a professional soccer player who plays for Serie A club Napoli and captains the Senegal national team is thankful for the words Maradona said to him.

I will never forget your words for me.
The words I now have in my head are just two: thank you.
For everything. Forever 💙

Some soccer managers had a few words to say about Maradona.

🇦🇷 "One of the greatest ever. Unbelievable footballer."

Many people are mourning the death of Mardona even those who looked up to him.

When I was a little kid, Diego Maradona was the person who made me realize that human beings are capable of moments of superhuman genius. I remember re-watching this goal over & over for years, inspired to reach for the stars. Thank you Diego for teaching me to dream big. RIP. pic.twitter.com/p63CSoA09W

Pope Francis is from Argentina like Maradona and is paying tribute as best as he can. According to TMZ a Vatican spokesperson says Pope Francis reflected “fondly to the times they met in these years and remembers him in prayer.”

Pope Francis happens to be a lifelong fan of the Buenos Aires San Lorenzo football team. In addition, Pope Francis had been praying for Maradona after knowing his health issues.

Spokesperson included how Pope Francis said “he looks back with affection to the occasions of encounter in recent years and remembers him in his prayers, as he has done in recent days since he learned of his health conditions.”

Rest in Peace Diego Maradona (1960-2020), our hearts are with his family as they grieve the loss of the amazing soccer player.