"It's not NOT a bop"
By Victoria Hunt

There is little that is more entertaining than some good ole’ celebrity drama, but you know what we love even more? When celebrities celebrate each other’s wins. If you were blessed enough to be a teen in the late 2000’s, you most likely listened to Taylor Swift’s ‘Fearless’ album non-stop. We can’t blame you. That album is an absolute riot of heartbreak, adolescence, and teen love-songs. Just recently, Taylor Swift re-released the album in newly recorded version, including previously unreleased songs like, “You All Over Me,” and of course, the song, “Mr. Perfectly Fine.” As you can imagine, there have rumors stirred by swifties that the song, “Mr. Perfectly Fine,” is about her teenage ex, Joe Jonas.

Actress It-girl, Sophie Turner, has been married to Joe Jonas since 2019, and is the mother of their child. While some fans may have speculated that she would have negative things to say about the song from Taylor Swift, Turner, just like the rest of us, is jamming out to the album. On Turner’s Instagram, she even posted a screen shot of the song inspired by the former Jonas Brother with the caption, “It’s not NOT a bop.” 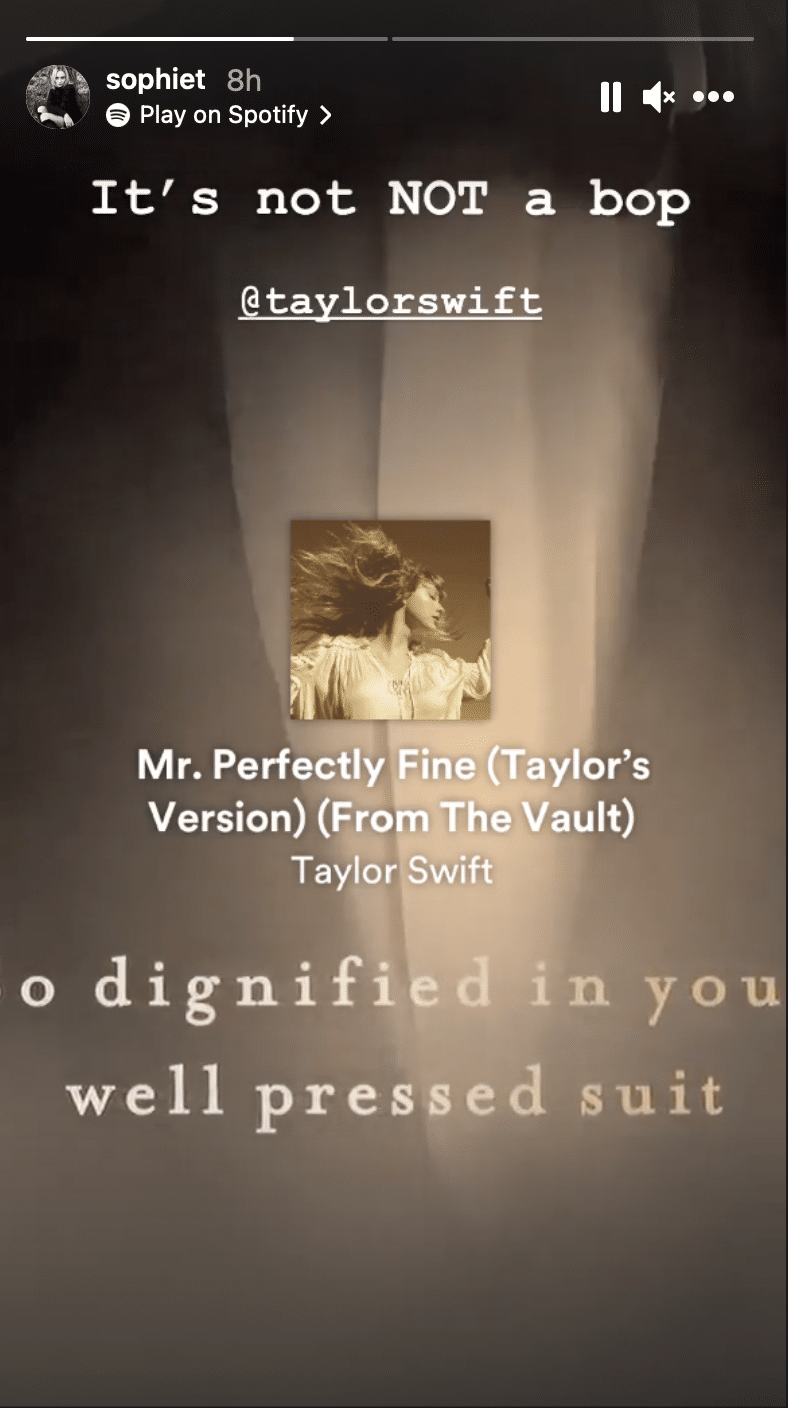 Talk about women supporting women. We love to see it. Taylor Swift even took to her own Instagram to share a screenshot of Turner’s story with the caption, “Forever bending the knee to the [Crown Emoji] of the north.” 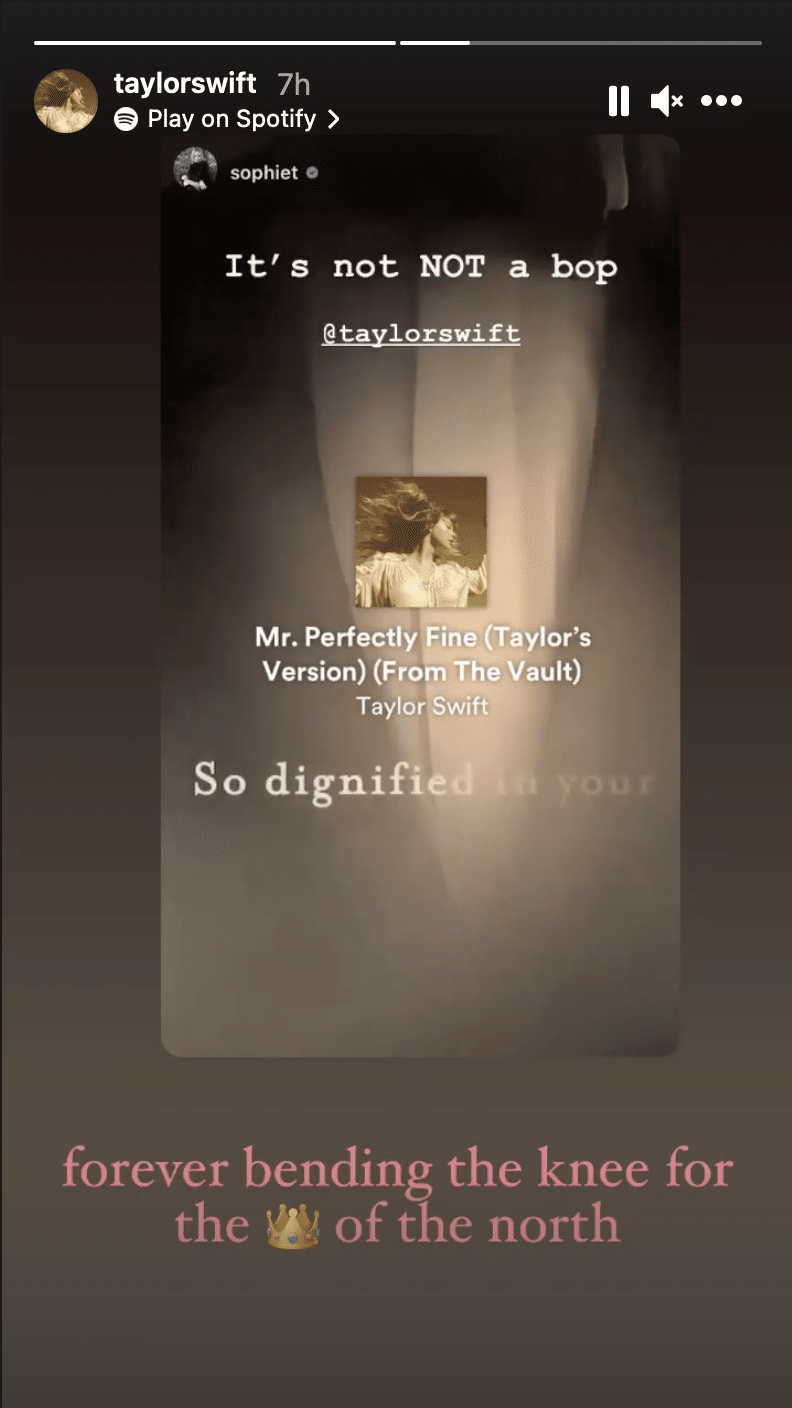 We are ~obsessed~ with this unforeseen friendship that is developing right now. Will Sophie Turner be the next member of Taylor Swift’s squad? We can totally see it already and so can Twitter.

Just like us, Twitter cannot get over this interaction between the two biggest pop-culture celebrities. Twitter has already made memes about it and they are both sweet and hilarious.

Alice shared this ‘Friends’ scene that shows Joe Jonas, as Joey, feeling a little left out of the situation.

Katie shared this ‘Mean Girls’ gif with the caption, “if I ever married someone taylor swift wrote a song about I would do exactly what sophie turner does.” Yeah, us too. At the end of the day, we were all swifties first.

if I ever married someone taylor swift wrote a song about I would do exactly what sophie turner does pic.twitter.com/th6I7q2NUG

This meme of Sophie Turner was captioned with, “Sophie Turner bopping along to Taylor Swift while she absolutely obliterates Joe Jonas:”

This old skit from SNL was brought back onto our timelines in a hilarious twist on Joe Jonas’ unfortunate reality at the moment.

This picture of Joe and Sophie at a sports game was used in this meme where Twitter user, Melissa Minton, wrote,”sophie turner listening to taylor swift obliterate joe jonas with decade old songs.”

This one is absolutely SENDING us, as nads shared this meme with the caption,
“taylor swift: ‘good morning we’re hating joe Jonas again’
sophie turner:”

This user shared this tweet writing, “idk about ya’ll but personally if taylor swift made a diss track about my husband i’d stream it. in front of him too. sophie turner rlly said the north remembers yes loyal queen.”

idk about ya’ll but personally if taylor swift made a diss track about my husband i’d stream it. in front of him too. sophie turner rlly said the north remembers yes loyal queen pic.twitter.com/w6rOIzafoO

We love these two queens and are glad the media is not pinning them against each other over a man, nonetheless a Jonas brother.

Would you be able to listen to a song by an ex-girlfriend of your husband? Let us know in the comments!