The internet has collectively put their heads together yet again and has concluded that our favorite yellow under the sea sponge had something to do with the death of Jeffrey Epstein. Yes, you read that correctly, people are trying to tie Spongebob Squarepants to the Jeffrey Epstein conspiracy. Spongebob’s home address shares a location in Google maps with one of Epstein’s compounds. 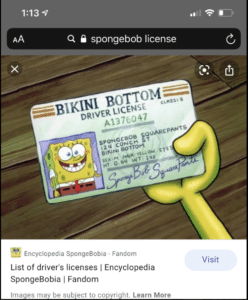 The theory hinges on the address listed on Spongebob’s driver’s license. The address in question matches that of Little Saint James, a site suspected by the FBI to be where several of Epstein’s crimes took place. In a viral Facebook post one woman wrote “all of these cartoons are tainted by pedophiles. our kids are not safe.”

In the post, a picture of Spongebob’s driver’s license was included as well as a google maps ping of Little Saint James. However, Google maps have been notoriously unreliable. It requires little to no verification of identity if someone says that they are a business owner, and even less identification to claim a new business at a new address.

The address in question is 124 Conch Street, and when placed into google maps you are taken to Ledges of Little Saint James, a theme park in the US Virgin Islands. However, that “theme park” is believed to be Epstein’s main compound on the island and was searched by the FBI after his death.

Twitter and TikTok users also got in on the action trying to rationalize how Spongebob and Epstein were related. Some of the explanations make more sense than others but for the most part, all theories are hinging on the fact that Spongebob and Jeffrey Epstein have the same address.

when someone sends me conspiracy shit and i say ‘no way thats true’ then i fact check it myself and find spongebob had the same address as epstein island.. pic.twitter.com/xfMOERBe4J

Google populates information using people it trusts as Map Guides. MGs ( which anyone can be) can make edits. Google approves the changes in 24 hr or so but long as its not absurd, they typically do. Use your analytical thinking skills. Why is only the B in Bikini capitalized.

So in reality we are not sure if Spongebob and Epstein have the same address, or if this is just some coincidence. But it definitely doesn’t look good for the cartoon franchise to be associated with the likes of someone like Epstein.

How are you feeling about this whole thing? Do you think this is the internet collectively having too much time on its hands? Or is this something deeper that needs to be looked into?