Gritty is really living up to his name. 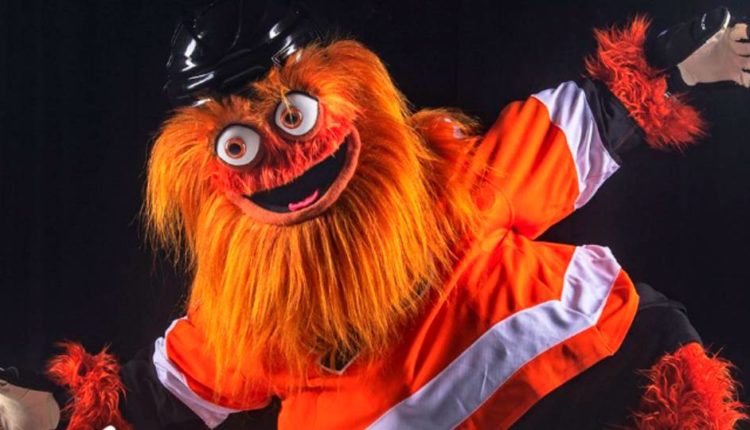 Look, I can’t say too much. I’m from Boston and our big mascot, the Red Sox’s Green Monster, looks like a 99 cent store Elmo. So, in that case, the Philadelphia Flyers’ newest mascot, Gritty, lives up to one huge promise – he could probably beat the stuffing out of any rival mascot and then eat his carcass like a python. At least that’s the vibe I get from Gritty, who looks like a cross between a cartoon of a school bully’s terrifying dad and the beast that lives under your floorboards (which demands chicken meat so he doesn’t discover how good human flesh is). I mean, check this freak out!

Join us in welcoming the newest member of the #Flyers Family, @GrittyNHL!!

Man, Gritty. Get your damn eyes stabilized. You googly-eyed freak.

His official bio hints that he is the son of a bully (man, was I close), and that he has mythical, almost troll like tendencies and origins. Like something out of a Brothers Grimm story:

“His father was a “bully,” so naturally he has some of those tendencies – talented but feisty, a fierce competitor, known for his agility given his size. He’s loyal but mischievous; the ultimate Flyers fan who loves the orange and black, but is unwelcoming to anyone who opposes his team. Legend has it he earned the name “Gritty” for possessing an attitude so similar to the team he follows.

He claims that he’s been around for a lot longer than we know it, and recent construction at the Wells Fargo Center disturbed his secret hideout forcing him to show his face publicly for the first time. He has some oddities that are both humorous and strange. A number of times he’s been caught eating snow straight from the Zamboni machine, and unbeknown to most, his love of hot dogs has been inflating the Flyers Dollar Dog Night consumption totals for years.

That being said, there’s no denying that he’s one of our own.”

Damn. Massive self-own of Philadelphia to call this freak one of their own.

Reactions have been mixed. Philadelphia native Paul F. Tompkins loves this freak of a creature, while John Hodgman doesn’t understand what the huge deal is here! He just looks like a normal hockey player! Plus… more good tweets.

You think you’re better than Gritty? I got news for you: YOU’RE NOT.

Gritty is a new dude on the scene and I am giving him a chance. How dare you judge Gritty. You make me sick. GO GRITTY, YOU GOT THA GRIT

Thanks, @PFTompkins, for bringing this to my attention. But I don't get it. I just see a regular old hockey player. Is there something supposedly different about @GrittyNHL ? https://t.co/NyJSWhKa0Y

Gritty is short for My Cousin Gritty, e.g. "This is my cousin Gritty. Just give him water and tell him it's vodka, he won't notice"

*Looks resolutely out to the horizon as the sun rises on a brand-new day* I'm going to fuck Gritty.

Gritty is the street name his meth dealer gave him. #dreamhaunter https://t.co/KWyM9RvO0w

What do you guys think of Gritty? Let us know in the comments, or on Twitter at @WhatsTrending.