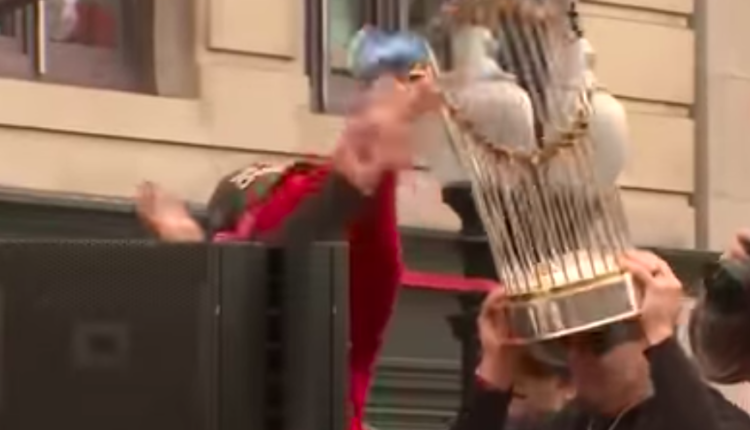 Look, I love Boston. I’m from Boston. I’ve written about my love of Boston many times before, but boy oh boy do I love Boston. Our dirty, rough around the edges ways are great and almost make up for whatever you’re about to say that is a legitimate gripe with my incredible city. Now, as you may know, the Red Sox recently won the World Series up against the Los Angeles Dodgers (Boo! Boo! Unless the Red Sox do something real messed up someday! In which case please retroactively turn all those boos into yays!), and so there is a celebration to be had. Now, sometimes when there’s a sports celebration stuff gets out of control. Remember the guy who ate the horse poop after the Super Bowl last year? Heck yeah you do! But in this case, the reaction we get is purely Boston as some goon flings a beer can at the World Series Trophy, getting the flags all bent out of shape.

There’s nothing more Boston than that. First off, it’s a brazen idiot crime done at someone who, I am going to guess, you worship. It’s the Red Sox! It’s the celebration of their victory! If you’re the kind of guy who chucks a beer can at as trophy then it’s the reason you wake up in the morning, to see the Sox do their thing! Second of all, beer is somehow involved, but in a way that feel strange and baked into the DNA of reality rather than the result of drinking. It’s like noon when the parade is happening. This guy had a beer can outside at noon and he flung it at something he worships. Third off, it’s just great. All of it is great. I love this video and I miss Boston so damn much.

According to the Washington Post the damage to the trophy was minor and will be immediately fixed.

Those weren’t the only beer cans thrown at the parade. Six people were arrested for the throwing of the cans, including 19 year old Patrick Connolly whose chucked beer can struck Red Sox manager Alex Cora. Said the arrested Connolly “I love Cora, I didn’t mean to hit him”. Hell yeah, Boston!

Some #RedSox players catch a few cans of beer thrown by fans at the #RedSoxParade. Follow along live: https://t.co/UYnQF1DFbu pic.twitter.com/vBmWsNsXtZ

What do you think of the video of the pure New England glory? Let us know in the comments or on Twitter at @WhatsTrending.