Taylor Swift’s fans’ concern for her safety has been all over social media. When Taylor Swift guest-starred on Jimmy Kimmel she appeared to make the #SignalForHelp which is a signal of domestic violence.

Fans were excited after Swift released a second surprise album this month called ‘Evermore’. Although that has gotten a lot of attention, fans can’t help but question if the singer was trying to ask for help on a recent interview.

This week Taylor appeared on Jimmy Kimmel Live on a video call. She came on the show to talk about her new album Evermore being released just a little while after its ‘sister album’ Folklore was released. Swift addresses some questions about the album that fans have been dying to know.

But while she was answering those questions, fans were a little distracted by Taylor Swift’s hand gesture when she was saying the word “code,” in the interview. 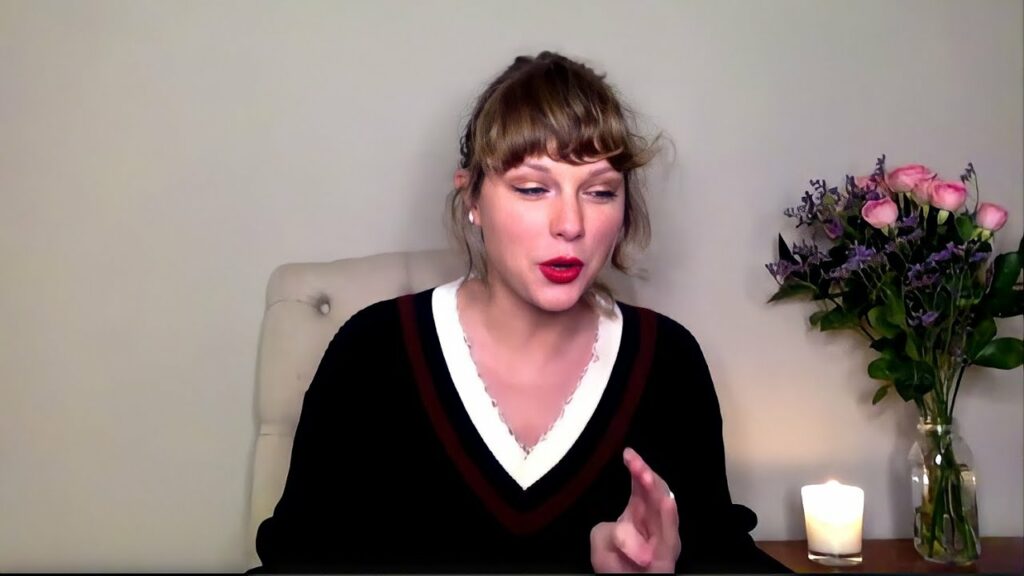 The theories from fans have been spread across social media trying to bring awareness that Swift might be in trouble. The domestic violence at home hand signal was created to help victims ask for help without having to say anything. The victim is supposed to hold up four fingers and then place them over their thumb. This signal shows that you are needing help. Fans now believe that Taylor’s hand gesture was completely intentional.

Another clue that fans are speculating could be a sign is the timing of when she made the hand gesture. She was making the gesture when talking about creating a fake album name on the cover of Evermore. However, the way that she does it in the interview could have been just casual hand movements when speaking. In the #SignalForHelp video, the victim clearly holds up her hand to show the intentional gesture.

Taylor Swift has not yet commented on the growing concern but fans are waiting for her response to let them know that she is in fact not in any danger.

Fans across social media have been analyzing every word and action from Taylor because of the hand gesture. Many are concerned that she is not getting the attention she needs to get out of the situation. Hashtags like #HelpTaylorSwift and #SaveTaylorSwift began trending on Twitter. TikTok creators have been creating videos to spread awareness for Taylor’s possible situation that has received millions of views.

This Taylor Swift fan tweeted out wondering why the situation doesn’t have more attention.

Another fan believes that her hand gesture was ‘clearly’ the signal for domestic violence.

Why is @taylorswift13 not trending. She clearly did the hand signal for domestic violence in her recent interview. Shouldn’t his be getting some attention? She needs help!! #TaylorOnKimmel #TaylorSwift𓂸 #helptaylorswift

While this user pointed out something that fans could be overlooking while making these assumptions about her relationship.

MTE….it just doesn’t sit right with me. Taylor SWIFT would really signal for help on tv when she barely wants people to know anything about their relationship & the little things we do know from even all the way back to reputation songs are all how good he makes her feel…

Alanna added that the singer wouldn’t make the hand gesture on television where her partner would likely see that she was making the signal. Telling people to ‘Leave her alone’.

You don’t hand-signal for help on Jimmy Kimmel, where your abuser will inevitably see it along with mountains of public speculation. Taylor Swift isn’t an idiot, she’s fine. Leave her alone

Some even pointed out that Taylor did not make the signal once but twice during the interview.

Michael shared an article showing what the ‘Signal For Help’ so that users can see the comparison.

People have been quick to remind users on social media that Domestic Violence is a serious issue and should not be taken lightly. Some have even been offended that the accusations have been taken lightly by making assumptions with no real evidence to back them up.

One person commented on the video that the hand gesture wasn’t technically used correctly so therefore it could not have been an intentional cry for help but just a coincidence.  The user stated, “[…] The hand gesture is supposed to be done in private conversations and not on national television, that defeats the whole purpose. Please spreading false info, it could really affect her relationship and mental health.”

Taylor Swift’s publicist, Tree Paine, hasn’t officially made a comment about the concern either. However, fans have noticed she did like a tweet that denied the allegations. The fan stating, “They said she was fine cause people were concerned. She’s done this gesture for years. She’s not alone too she has people around her all the time and the point of this signal is to do it in person with a loved one so they can help right away.”

Tree Pain Taylor Swift’s publicist has liked a tweet saying she was okay!! Please do not spread unnecessary worry. pic.twitter.com/kFbkq5fPRU

Domestic violence has increased due to the COVID-19 pandemic and more people being home. It’s important to not only know how to ask for help but also to know when someone is asking for it. If this is the case for you, this hand signal during a video call alerts the person you are speaking with that you are in need of help. If you see this hand signal being done, the person is letting you know that they need help. Visit thehotline.org for more information.