Kentucky Police executed a no-knock warrant in March 2020. Breonna Taylor was fatally shot in her apartment by police but McCoy felt as though the situation was of Taylor’s own doing.

The science teacher shared with the class that Taylor, “put herself in that position by hanging out with somebody she shouldn’t have been with.” When she was talking about the situation McCoy didn’t even know Breonna Taylor’s full name. She kept referring to her as “Breonna someone.”

Many students were uncomfortable and frustrated with the teacher but she continued to talk about the situation. She said that her death was because of the company she kept and had absolutely nothing to do about her race. McCoy said, “When you hang out with people with guns who shoot at cops you’re likely to get caught in the crossfire.”

It was her students that tried to correct the teacher during her rant about the situation. The students informed her that Breonna Taylor wasn’t with the guy who was wanted by the police. The guy the teacher was referring to was Taylor’s boyfriend, Kenneth Walker. The warrant pertained to her boyfriend who was already in police custody. After pointing that fact out, McCoy still continued.

She kept saying she thought it was sad that Taylor put herself in that position. She repeatedly defended the actions of the police claiming there was proof that Kenneth Walker has fired the first shot and hit an officer in the leg.

One of the students recorded the class and shared the video online which immediately caught the attention of users all over social media. The video went viral which had many people demanding the school to fire McCoy.

Pebblebrook High School received numerous complaints about the incident with Susan McCoy and her lecture. The school responded by saying that they are investigating the situation. The principal finished her statement by affirming, “We will show empathy and support for each other, respectfully, as long as I’m principal of Pebblebrook High School.”

McCoy released an apology video for the things she said about Breonna Taylor during the zoom class. She recognized that she shouldn’t have said anything about a situation she was “very ignorant” about.

Update: teacher Susan McCoy has sent out an apology video for her offensive and racist comments about Breonna Taylor made during a class zoom session. pic.twitter.com/Y6nfth14C2

After viewing the apology video, people felt that her apology came off disingenuous. Viewers felt as though the remorse she showed seemed to be for the fact that the situation became so public rather than for saying the comments.

The recording of the class was put on social media. All across social media people chimed in with their thoughts about how unprofessional they thought the teacher was. Many people were angered by the teacher and demanded something be done about the situation.

This is absolutely heartbreaking and gross. Susan McCoy does not deserve to teach at ANY school. If Pebblebrook high school does not fire her then they are co-signing her actions. https://t.co/sMAajt80Oy

Just a reminder that Pebblebrook’s student population is 58% Black. What other micro aggressions have Susan McCoy’s students had to endure? https://t.co/YFIZQdVqI9

How can you trust that a teacher like this is going to effectively grade a student’s forensic science project? How can you be sure she’s going to THOROUGHLY educate your child? She can’t. I barely passed, and I remember her apathy and disdain for my struggle in the sciences.

This is such a disgrace. This is the demographics of Pebblebrook. These students deserve better than Susan McCoy. If she says this on camera to her students, imagine what she says and thinks in private. She should resign. pic.twitter.com/1V2k4tp7pR

Forensic Science teacher Susan McCoy of Pebblebrook High School is about to have a very bad day.

One user tweeted out that they felt Susan McCoy didn’t say anything wrong. The internet very much disagreed with that comment.

Based. Susan McCoy said nothing wrong. I stand with this Pebblebrook teacher. https://t.co/M7lKjU2V4H

Breonna Taylor's MURDER didn't just happen. This news isn't new. She's apologizing because she got caught. She went into her conversation fully prepared on what she wanted to say. She had already formed her view on what happened. This is not the first time she spoke on this topic

Another user pointed out that as a teacher it was wrong to even speak on a subject that she didn’t have all the facts about in the first place.

And that's the problem: she thought that she had all the details. Totally inappropriate conversation. She should not be employed as an educator at any level. 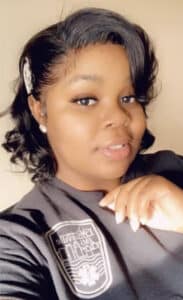 On March 13, 2020, in her apartment in Louisville, Breonna Taylor was shot six times and bled out on the floor. The Kentucky Police had a ‘no-knock’ search warrant for Breonna Taylor’s apartment.  Her boyfriend, Kenneth Walker, said he did not know it was police and opened fire.

There was a total of 32 shots fired by the police that night. Attorney-General Cameron explained the F.B.I. laboratory concluded that the shot that was fatal was fired by Detective Cosgrove. However, a lab in Kentucky could not determine exactly who fired the fatal shot.

Breonna Taylor has become an icon for the racial injustice that the black community faces. It took several months for Breonna Taylor to get justice. Breonna Taylor’s family received 12 million dollars along with changes to prevent future deaths by officers. The agreement was announced about the settlement of the wrongful-death lawsuit on September 15, 2020.

The Cobb County School District released a statement to the public letting them know they are also conducting an investigation. “As a District, we expect every member of our staff to treat each other with respect and understanding.”