Not the expected warm welcome
By Stephanie Makri

Teen Vogue’s staff publicly issued an announcement regarding Alexi McCammond, a former Axios reporter now hired by the magazine. The twenty plus members of staff at Teen Vogue expressed their concern over the outlet’s reputation, as McCammond in the past has made racist as well as homophobic comments. The editors’ statement raised multiple reasons as to why they are stepping forward, with the main one being the magazine’s readers.

“We’ve heard the concerns of our readers, and we stand with you,” wrote the staffers in an unsigned social media post published on Monday.

“In a moment of historically high anti-Asian violence and amid the on-going struggles of the LGBTQ community, we as the staff of Teen Vogue fully reject those sentiments,” read the statement. They continued asking for an “internal conversation” in order to preserve the “integrity granted” to them by their audience.

The criticism began once the magazine declared McCammond’s appointment to the role on March 5th.

The letter by the editors was sent to the chief executive officer Roger Lynch and chief content officer Anna Wintour. In the last year, Condé Nast, a global media company owning some of the world’s leading brands including Vogue, The New Yorker, and Vanity Fair, has faced backlash for its lack of diversity and inclusivity. Aiming to start fresh, the magazine has been trying to set a new narrative which speaks for all.

A Condé Nast representative in a statement on Monday said that McCammond was employed “because of the values, inclusivity and depth she has displayed through her journalism,” and that she “took responsibility for her social media history and apologized.”

McCammond was a political reporter for Axios since 2017, covering massive campaigns such as the one of Joe Biden in 2019 and 2020. Her collaboration with Condé Nast highlights the company’s value in Teen Vogue’s political perspective. In a statement, Wintour discussed the former Axios reporter’s capabilities and that her participation in this new position will be valuable.

“[McCammond’s] interest in fashion, wellness and important issues in the lives of the Teen Vogue audience and broad knowledge of business leaders, elected officials, influencers, photographers and filmmakers is unrivaled.”

In 2011 and 2012, Alexi McCammond published tweets which revealed a racist part of her character, mainly targeting Asian stereotypes. Over the weekend, these tweets resurfaced the Internet causing several reactions. However, in 2019 she publicly apologized for her behavior saying that she is sorry if anyone was offended, emphasizing the fact that she no longer stands with such viewpoints and ideas. As the criticism grew over the past twenty four hours, she once again came out expressing regret.

“I apologized for them years ago, but I want to be clear today: I apologize deeply to all of you for the pain this has caused. There’s no excuse for language like that.” 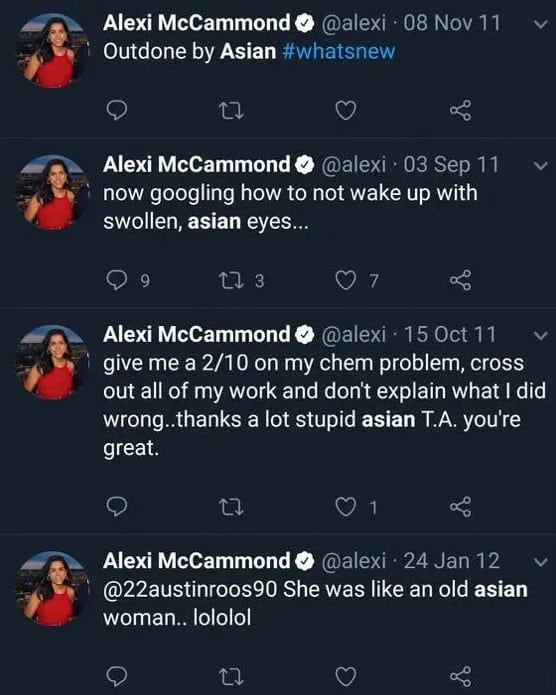 The platform was split in two following the announcement, as some were fast to judge saying that Condé Nast’s hiring of the former Axios reporter shows an unsympathetic approach toward racism. On the other hand, the reference to cancel culture was evident as users commented that this concept should not exist.

I'm really fine if we all just agree to make a "tweets from minors no matter how bad don't count in adult life" rule and apply that across the board.

Old tweets, especially ones you already got called out and apologized for, shouldn't cost you a job. That being said, what did Alexi McCammond think was going to happen to her at the most cancel cultury, obnoxiously woke publication in America? Forgive and forget?

Are people seriously suggesting that a young black woman should be fired because of (undeniably racist) tweets she posted a decade ago, as a teenager, that she has already apologized for, a while back? I mean, isn't changing, growing, evolving, regretting, part of being human? https://t.co/sqZSwwFe8b

Being judged for something said 10 years ago at a vulnerable young age should be sometimes reconsidered, especially following an apology. However, some describe McCammond’s comments as too extreme to be able to forgive. Either way, cancel culture has proven to have destroyed many lives, but growth and evolution within our civilization has taught people to think thrice before making such harsh remarks.