In our modern digital age where anyone can gain recognition through the tool that is the internet, it is no wonder that everyday social media enthusiasts are inventing unique video challenges with somewhat easily attainable dreams of going viral. Many popular self-made creators and influencers have built their reputations around challenging themselves to perform questionable acts in hopes of scoring a well-viewed video that will make the adrenaline provoking dare pay off. Some might ponder how high a price people are willing to pay to reap the benefits of becoming an overnight internet sensation. It seems as though the fame is worth an arrest and a possible 20-year prison sentence.

What kinda psychopathic behavior is this?! pic.twitter.com/T8AIdGpmuS

A teenager in a Lufkin, Texas Walmart is the spearhead of this viral video challenge. The girl and her boyfriend were on a stroll through the freezer section when they decided to take a sweet pitstop to do some sampling. In the video, the suspect licks the top of a Blue Bell ice cream carton, and with the encouragement of her boyfriend, opens the freezer door to place the container back where she found it. After the video blew up on Twitter, now at over 13 million views, police identified the subject and her boyfriend with the help of store surveillance cameras. Initially, she was charged for a second-degree felony of tinkering with a consumer product, however, after further investigation, it was determined that she is a minor and the case was passed along to the discretion of authorities within the juvenile justice system. The punishment for such behavior was deemed worthy of a 2-20 year jail sentence, had the culprit been an adult. What is posted to the interwebs forever impacts the interwebs though, and this challenge quickly gained speed under the hashtag #icecreamchallenge.

This done gotten out of hand. Now his old ass should know better🤦🏽‍♀️@ILoveBlueBell @WAFB @Kiran_WAFB pic.twitter.com/TKX0jUikok

If you thought this was it, you might want to grab the lower half of a pint of your favorite flavor before you continue to educate yourself on this germ infestation, as this news will take awhile. As mentioned, the damage didn’t stop after the Texas teen faced legal challenges. The trend set off a long string of events, including the arrest of Lenise Lloyd Martin III, a 36-year-old Louisiana man who casually wandered into the freezer aisle and instructed someone to record him licking and poking at yet again a tub of Blue Bell ice cream with the freezer door propped open. The video ends as he leans in to return the container to the freezer with a sly smile behind shaded glasses. He then posted the video to Facebook and was arrested the next day for the same crime as the Texas teenager despite presenting the receipt he was given after he eventually bought the carton he licked. Additionally, Martin was charged for violating a Louisiana specific law for the “unlawful posting of criminal activity for notoriety and publicity,” which is applied for the distribution of a recording of illegal activity. He claims it was “a joke with no criminal intent or activity” and that he simply “wanted to be famous.” This week Martin will attend his bail hearing.

The only Blue Bell Ice Cream being licked here in Keller this holiday weekend will be the kind you’ve already purchased. Cpl. Clark and Officer Bryan are seeing to that. #NotOnOurWatch @ILoveBlueBell pic.twitter.com/9BbBqN8mh0

Among the viral videos are threads of discussion and controversy in regards to Blue Bell’s packaging choices. Some are questioning the company’s lack of plastic seal with the theory that if such a seal existed under the lid of each carton, these ice cream licking videos would be attempted less since it would require a more significant invasion of the item. One Twitter user tweeted “I can never be at peace buying ice cream now” and many others complained that there isn’t enough protection. Blue Bell combated the accusations with the statement: “The safety of our ice cream is our highest priority, and we work hard to maintain the highest level of confidence of our customers.” The company went on to say, “food tampering is not a joke, and we will not tolerate tampering with our products.” Blue Bell says that because the cartons are frozen upside down, any invasions will appear obvious to customers since during the freezing process a natural seal is created. Still, ice cream lovers everywhere are using their voices to advocate for an additional plastic seal to guarantee safety. Blue Bell responded by stating that changes to their products go through many stages and are a long process.

Seriously, now the Walmart workers get to know my breakup heart ache.
It’s bad enough I have to change my relationship status on Facebook #icecream #walmart pic.twitter.com/yg5Gov9n1P

Since the multiple ice cream licking incidents, grocery stores around the country are responding by taking matters into their own hands. One Walmart placed a sign that reads “Please see employee for help” next to their now locked freezer doors. The Bellaire Police Officers Association posted a photo of two officers guarding another store’s freezer section. By taking this approach, the officers are attempting to stop the licking before shoppers can even get their hands on a tub. If you are an ice cream connoisseur you might want to consider triple-checking to make sure no hands (or tongues) have barged their way in before you could. 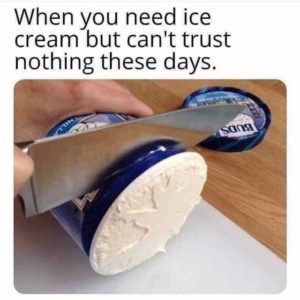