Charli and Dixie D’amelio are losing millions of followers after an incident this past week. It all started when the D’amelio family decided to create a new series on their family YouTube channel called Dinner with the D’Amelios.  This past week’s guest was James Charles, a known friend of the sisters.  However, James had nothing to do with the controversy that has stemmed from this issue.  During the video, Charli makes faces as the D’amelio’s chef explains what he has cooked for them tonight.  Charli also asked after the dinner had been served if there was any way they could have Dinosaur chicken nuggets instead.  Dixie has received a lot of criticism due to the comment.

YouTuber Trisha Paytas, among others, has been very vocal about the incident. When the video first came out, she reacted to a clip of the dinner and did not seem pleased.  In the following video, she called the sisters out for their actions.

“I’ve seen a lot of comments from Dixie just being really combative and bratty towards people who had criticism of the girls. There’s a chef making them food, they’re being really disrespectful, spitting out the food. And they’re 19. They’re young. But I do think since they are role models on such a big platform, they should be called out when they need to be humbled a little because you see this happen all the time. People get followers, people get really famous really quickly. They think they’re entitled to 100 million. They complain about having only 95 million. They complain about having a personal chef. I just think it’s really unbecoming and I don’t think it’s anything to be embarrassed about because they are young girls but to be catty and bratty in the comments when people are like ‘hey this isn’t really cool behavior,’ it’s just trying to help them learn. And ultimately not get canceled because this type of attitude won’t get you far.”

#greenscreen do u think influencers should be called out for unbecoming behavior ? Is it constructive criticism or hate ?

Both sisters have discussed the incident on their TikTok accounts with Dixie explaining in her TikTok video that those close to her know she is prone to throwing up, so the snails were put in the paella as a gag.

Charli took to live to defend her and her sister, backing up Dixie’s claim that it was indeed a prank for Dixie to find the snail in her food.

Charli also stated that she wanted Trisha to stop talking about her.  This caused Trisha to create a bunch of videos addressing the subject.  She cites that the main reason she has created videos calling out Charli is that she and her sister’s attitudes were unbecoming.

But Trisha isn’t the only YouTuber who had something to say. James Charles also offered his input.

“this Charli situation is NOT sitting right with me… 100M followers in one year & y’all expect her to know how to be a perfect role model? death threats because she’s a picky eater & made a joke about a milestone? 30+ year olds dragging someone half their age? feels familiar”

this charli situation is NOT sitting right with me… 100M followers in one year & y'all expect her to know how to be a perfect role model? death threats because she's a picky eater & made a joke about a milestone? 30+ year olds dragging someone half their age? feels familiar 😐

This tweet garnered a response from Trisha in which she insinuated that Charli was his “victim.” James made a quick response to this in a TikTok calling Trisha out.

“I didn’t want to respond to this because I didn’t want to give Trisha the attention she is craving, however, I have been accused of being a child groomer and this is not an accusation I am going to take lightly. To insinuate that the relationship between Charli and I is anything other than a friendship is absolutely disgusting. I don’t need Charli and Charli does not need me, I became a friend to the D’Amelio family, as a whole, very early on.”

In addition to Trisha, other social media users also have taken it upon themselves to call out the girls’ actions.

“Dixie and Charli should be so embarrassed and ashamed of themselves,”  a YouTube user commented on their video.

“Money really can’t buy RESPECT. And people can’t be decent human beings,”  another user stated. Other users noted that the sisters had been seen partying during the pandemic and seem to be out of touch with middle America.

Other users were still supporting the sisters after the incident.  “I just wish I could give you a hug and say it’s okay Charli but know that I’m here and I love you so much,” one Twitter user said.

“I f*****g hate y’all.  Charli Damelio is on live right now visibly shaking and crying because y’all cancelled her for ‘being rude’.  She is a child,” another stated. 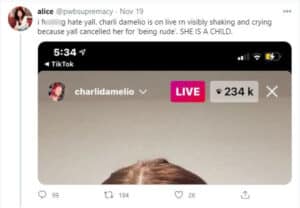 What started out as a small amount of backlash became yet another skirmish between James and Trisha while the D’Amelios have to pick up the remains. Whether it was a failed joke or an actual event, consequences for the D’Amelios have been real.