A decade after the release of the original book series, Percy Jackson fans are rejoicing as it gets another shot at the world of live action through a series on Disney Plus. Rick Riordan, the author of Percy Jackson announced the exciting news on twitter in a video with his wife Becky.

The announcement came after months of Riordan keeping his fans updated on conversations with Disney regarding a live action adaptation of the series through his Instagram, using the hashtag #DisneyAdaptPercyJackson 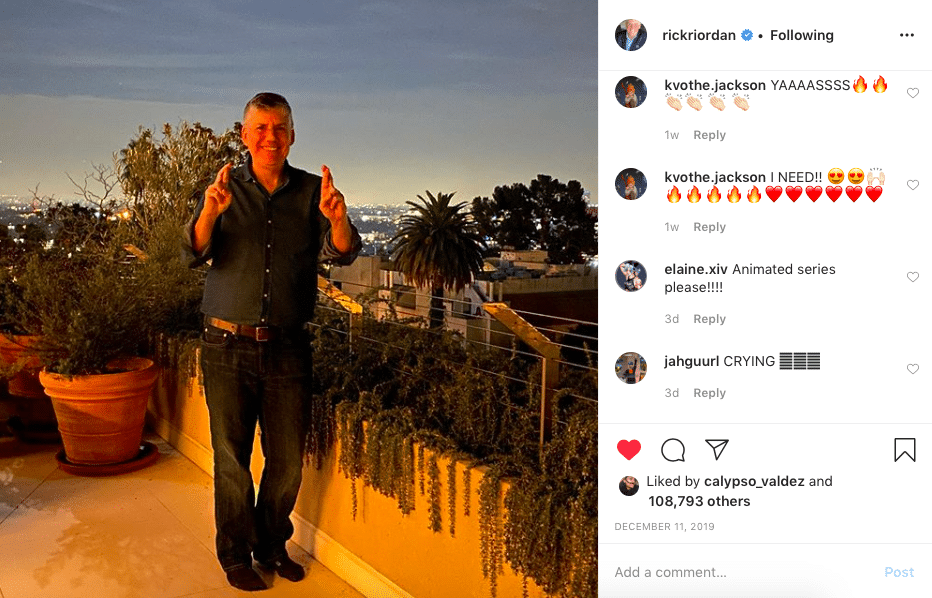 The Percy Jackson series was born when Rick Riordan began inventing stories for his son Haley, who had been diagnosed with ADHD and dyslexia. Prompted by his son’s suggestion, Riordan combined what Haley was learning in second grade about Greek mythology with new characters, which led to the creation of Percy Jackson, a young demi-god who traveled across the country to recover Zeus’ lightning bolt.

Percy Jackson met with resounding success and in addition to the pentology, prompted Riordan to create several spin off and supplementary books with the characters of the original series. The Lightning Thief, the first book in the series, has sold more than 1.2 million copies alone and was praised by The New York Times for being “perfectly paced, with electrifying moments chasing each other like heartbeats.”

This Disney Plus undertaking marks the first attempt at remaking the beloved series after 20th Century Fox’s original film adaptations of The Lightning Thief and The Sea of Monsters in 2010 and 2013,  which were criticized by both fans and Riordan alike.

In his November 2018 blog post, Riordan vocalized his experience with the original series while talking about the possibility of a hypothetical reboot. In this post, he let his fans know that he had very little say in the original movie film adaptations and expressed his dissatisfaction with the choices made by the studio.

He also included extracts from emails he sent the producers in 2009, which urged the producers not to change Percy Jackson’s age from 12 (as in the books) to 17, saying that it “alienates the core audience.” Of the script of the Lightning Thief movie, Riordan wrote  “here’s the bad news: The script as a whole is terrible,” saying “Fans of the books will be angry and disappointed. They will leave the theater in droves and generate horrible word of mouth.” He went as far as to say that if the script remained unaltered, “The movie will become another statistic in a long line of failed movies badly adapted from children’s books.” Despite this, the studio declined Riordan’s offer to rework the script and his prediction of the movies came true.

Riordan assured his fans that this reboot would be different in a follow up statement as he tweeted “We can’t say much more at this stage but we are very excited about the idea of a live-action series of the highest quality, following the storyline of the original Percy Jackson five-book series, starting with The Lightning Thief in season one.” He also spoke to his involvement in the upcoming franchise saying “Rest assured that Becky & I will be involved in person in every aspect of the show.”

Disney acquired the rights to the Percy Jackson series last year when they merged with Fox.