A video of a  TikToker being proud of spanking her kids is going viral. The video quickly gained attention and many people questioned the TikToker’s parenting method. The TikToker in question, Jocelyn Yates, has 272,900 followers on the social media app and she listed wife, mama, and believer as her introduction.

The first video in question was posted on July 24. The video first proposed the question “who spanks their kids?” Then, Jocelyn mouthed to Tiagz’s original soundtrack Muffins In The Freezer, saying “I did. What’d you gonna do about it? Nothing!” This TikTok received 262,400 likes and 25,800 comments. In the comments session, people quickly questioned her decision. One said “Research shows it is ineffective and creates anxiety in the child. It changes the relationship between the child and the parent for the worse.” Many agree with her, some people recalled their traumatic childhood experience and asked Jocelyn to stop her behavior. Some people identified that in their countries, it is illegal to physically punish the children.

Should parents be allowed to spank their children? Yes or No ⬇️ #parenting #momlife #momsoftiktok

♬ Muffins In The Freezer – Tiagz 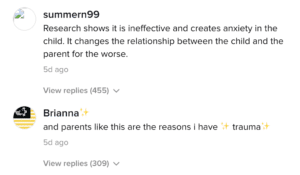 However, some people joined the opposite side. They state that even though they were spanked when they were young, they grew up just fine. One said, “I got spanked as a child and I’m 18 now. I’m perfectly fine.” Another disagreed, “communication is better in my opinions.”

After the conversation got heated, Jocelyn made a second video. “Sometimes, she deliberately disobeyed, so guess what, she gets her butt spanked. But not all the time, only when it’s necessary.” One comment said, “it’s never necessary.” Another user pointed out that “all the teens telling you how to parent has me cackling!” To that, the creator responded, “right like just wait till you have a toddler!”

Before these two videos gained their traction, Jocelyn used her TikTok to showcase her life as a mom of two and a businesswoman. On one of her TikToks, she hinted that she “joined the millionaire’s club before 24” by “doing online marketing for a health and beauty company.” She asked people to text her so that they can receive her help. In another TikTok, she displayed texts saying that she “help[s] other moms make money from home.” “Not a pyramid scheme,” she claimed. Regardless of whether people think she’s being a good mom, the word “mom” and the image of her kids are widely present on her social media.

What do you think? Let us know in the comments! For more social media news, follow WhatsTrending.