As we begin to dip into awards show season to recognize our favorite actors and musicians, some have noticed that there is no big event that honors and celebrates TikTok culture – until now.

TikTokroom is an Instagram page where the latest TikTok gossip is posted for almost 2 million followers. Usually, the TikTok news we see on mainstream media sources originated from this Instagram account that was started by two social media loving teenagers.

The founders of TikTokroom simply describe themselves as “the TMZ of TikTok” as their followers send in the latest gossip to be posted onto the page and the founders post paparazzi clips from sources such as the Hollywood Fix.

Through a Google form followers rushed to vote for their favorite TikTokers in categories from best style to best house to best dancer. To promote the event, many prominent TikTokers such as Charli D’amelio and Bryce Hall sent in videos to TikTokroom to encourage their fans to vote for them.

By the time voting ended, over 500,000 people participated in the voting process.

The TikTok awards show was held on Saturday at 8pm EST, but with a fun and engaging pre-show at 6pm.

For the pre-show, TikTokroom had their followers send in prospective outfits they would wear to the awards show to get people into the awards-spirit. Some sent in extravagant glamorous outfits while others took a more humorous approach. 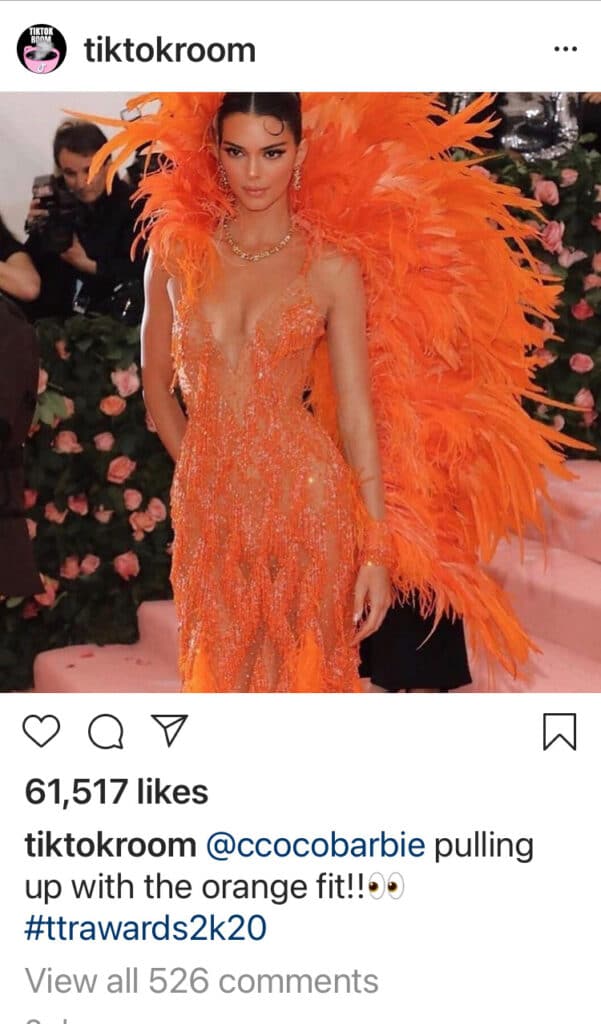 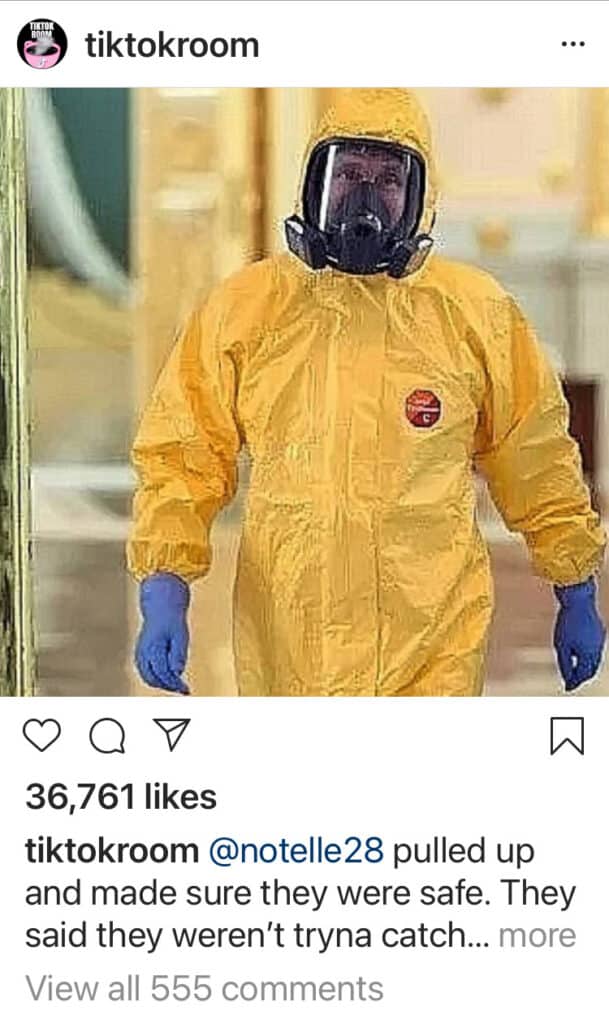 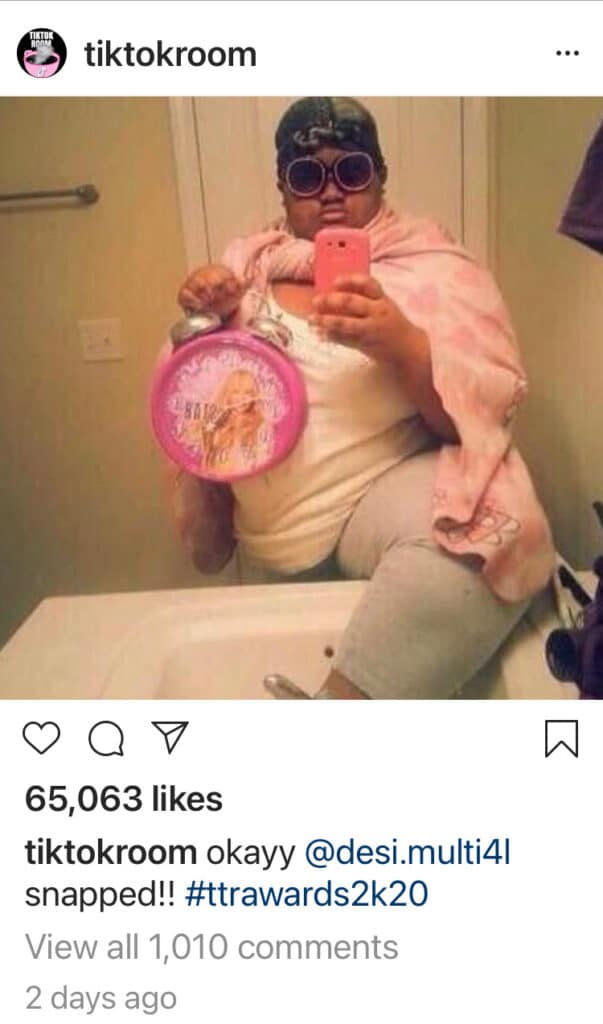 Leading up to the event, the Instagram account posted a prospective seat-list with the most popular TikTokers from Addison Rae to the Sway Boys. 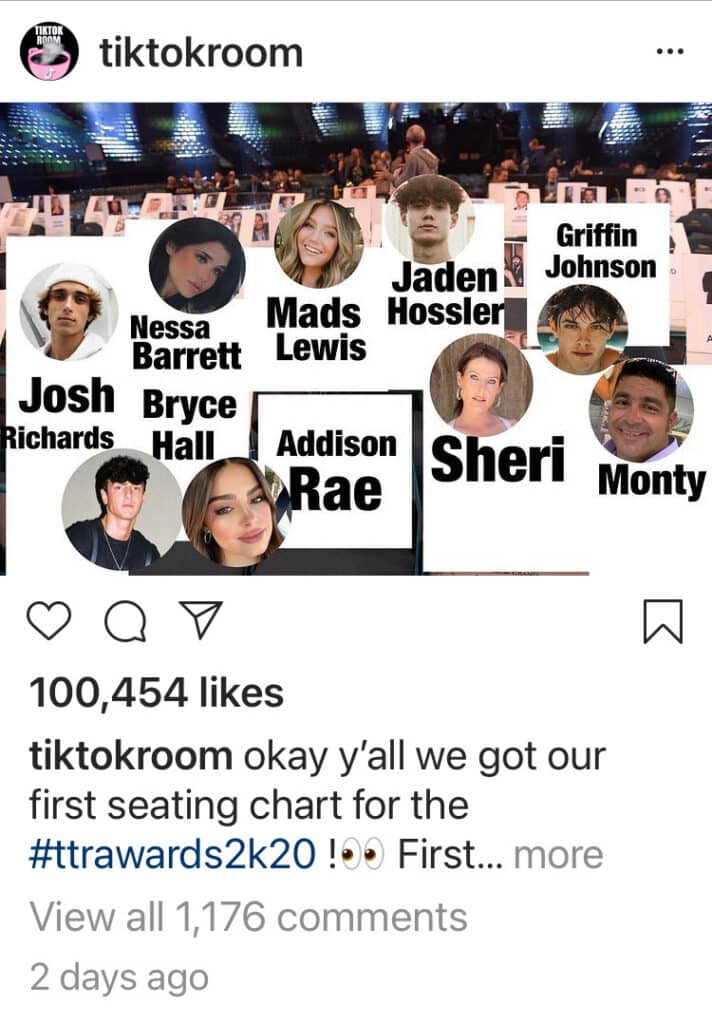 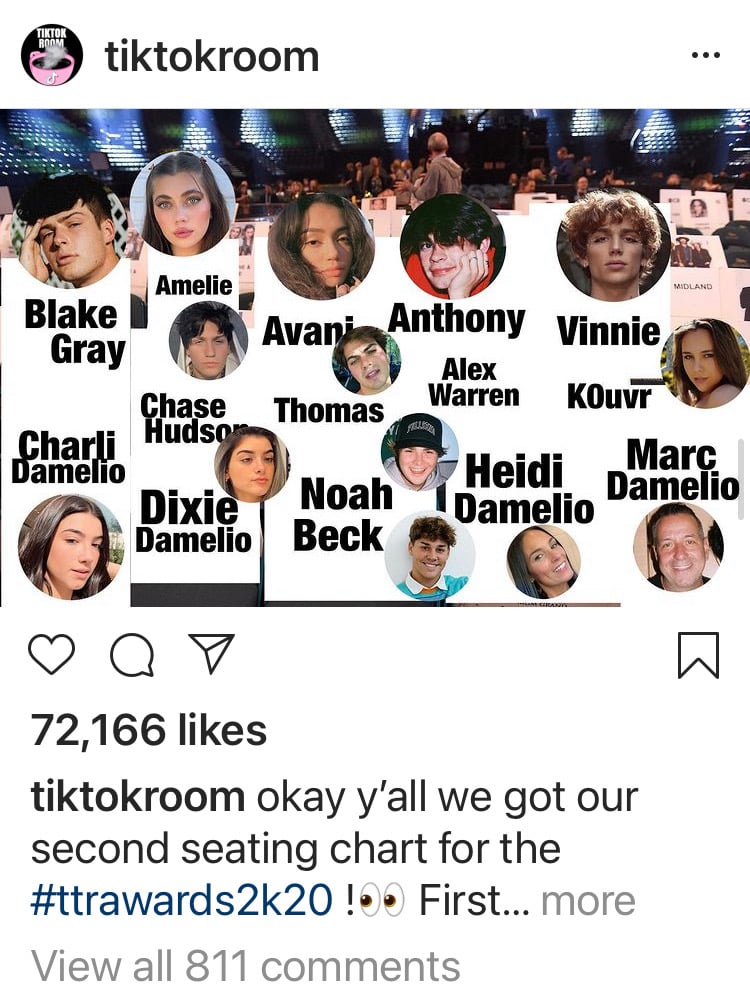 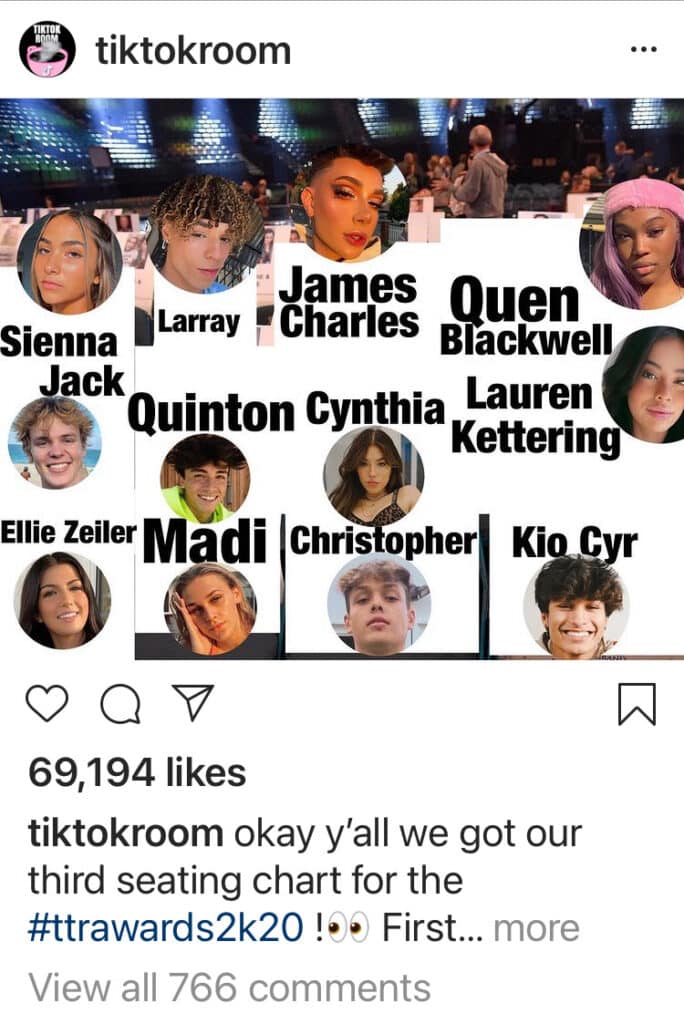 When the clock hit 8pm, the TikTokroom feed began to be spammed with all the results.

Who Won the Most Awards?

The biggest winners of the night were Sienna Mae Gomez, Larray, James Charles, and Charli D’amelio.

Gomez brings a positive and bubbly spirit to TikTok as she is not afraid to be herself and turn her insecurities into her best assets.

Her fans, including her boyfriend and Hype House Member Jack Wright, flooded the comments with support for the positive role model.

After the awards, Gomez showed her appreciation and love for her fans with a TikTok.

OH EM GEE. i love my acorns the most. BEST DAY EVER YAYYAAYAY

Another big winner of the night was the hilarious and relatable Larray as he won “Best YouTuber,” “Best Diss Track,” and “Funniest TikToker/Collab.”

Because Larray won his categories by a landslide, everyone was happy with the results, even Bryce Hall. Hall was the runner-up in “Best YouTuber” and was glad to be second to Larray.

Bryce Hall also lost to Larray in “Best Diss Track” as Larray shaded a long list of influencers in his song ‘Canceled.’

In the comments, Dixie D’amelio congratulated Larray but admitted she did not vote for him and implied she voted for ‘Convenient’ by her ex-boyfriend Griffin Johnson, which was meant to shade her. 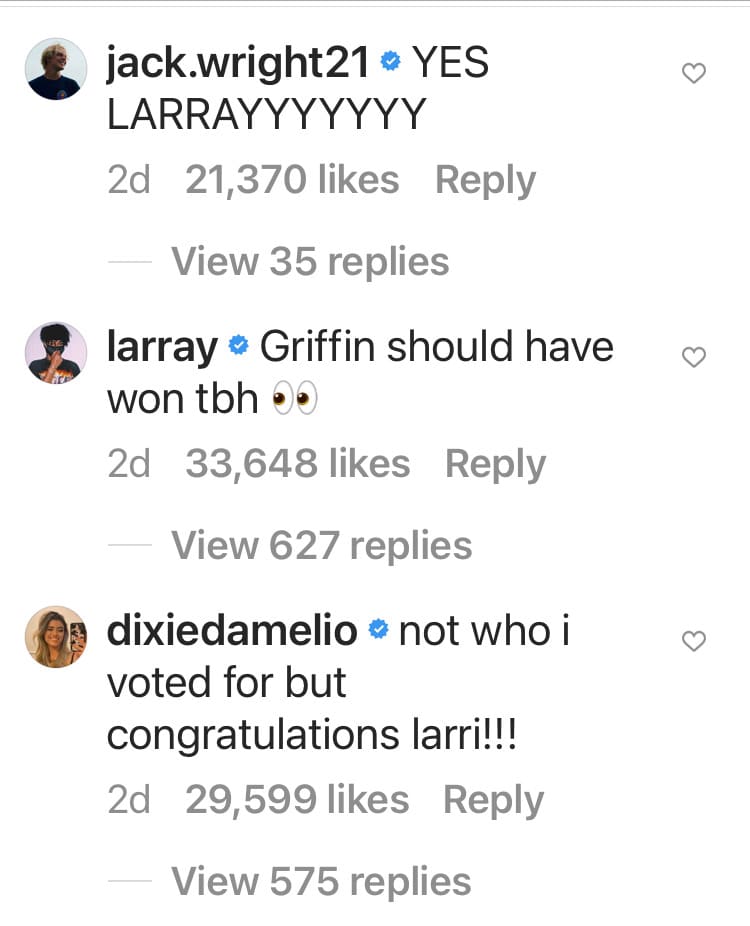 James Charles was also a big winner as he won “Most Achieved Male,” “Best Clapbacks/Comebacks,” and “Best Makeup.”

Most thought James Charles was well-deserving of his awards, but some wanted Abby Roberts to win best makeup. 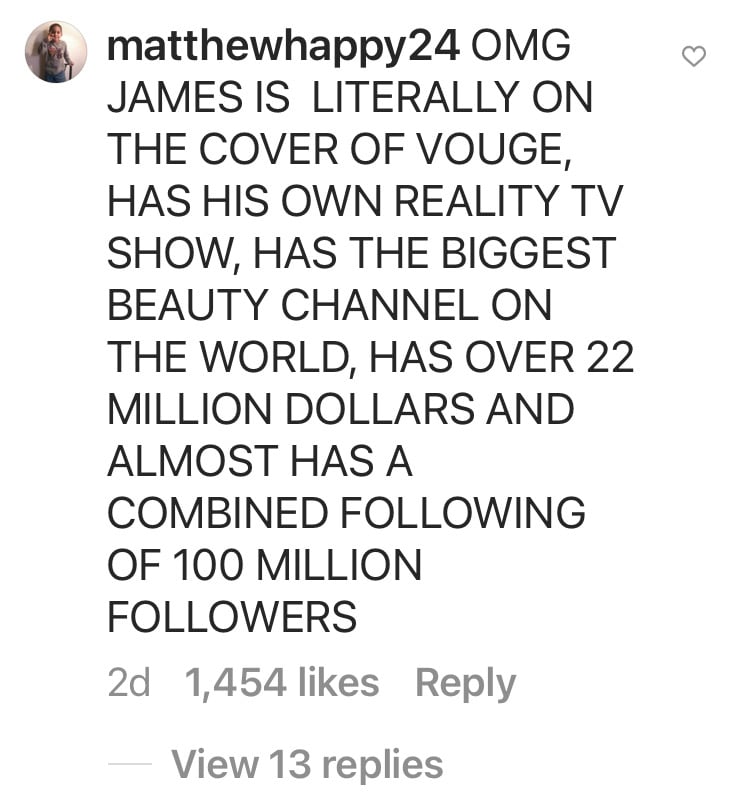 Is anyone surprised that Charli D’Amelio won the “Best Female Dancer” award? But that wasn’t her only award for the night. She is the most followed person on TikTok with over 100 million followers, and her massive social media success was reflected in the award show when she was also granted with “Most Active With Fans” and “Most Achieved Female.”

my dance has been all over my fyp omg that’s so swag and THANK YOU for 300k that’s insanely swag!! AAH♥️♥️

MY TWIN @jameswrightt JUST GOT INTO STANFORD! he’s worked so hard and deserves the world. love u james. i’m celebrating with this iconic dance #draft

People were mostly content with the dance results, but some wished talented dancers such as Jean–Victor Mackie and Baron also received some recognition.

Some also believed Jalaiah Harmon should have received “Best Dance Creator” for creating the iconic ‘Renegade’ dance over Sharpe who created the ‘Say So’ dance.

TikTok has also jump-started some young Gen-Zers’ music careers and the award show reflected this trend by awarding Jaden Hossler with “Best Song” for ‘Angels and Demons’ and “Most Talented Musician.”

Angels & Demons ACOUSTIC out now on all platforms <33

Most were happy with Hossler winning these categories, but there were some who wished Johnny Orlando won “Most Talented Musician” as Orlando had more success in the music industry, especially with his song ‘What If (I Told You I Like You)’ with Mackenize Ziegler.

Though the Hype House may claim they have the hype, the Sway House was determined to be the “Best House.”

And the Sway Boys were very excited to accept this title. 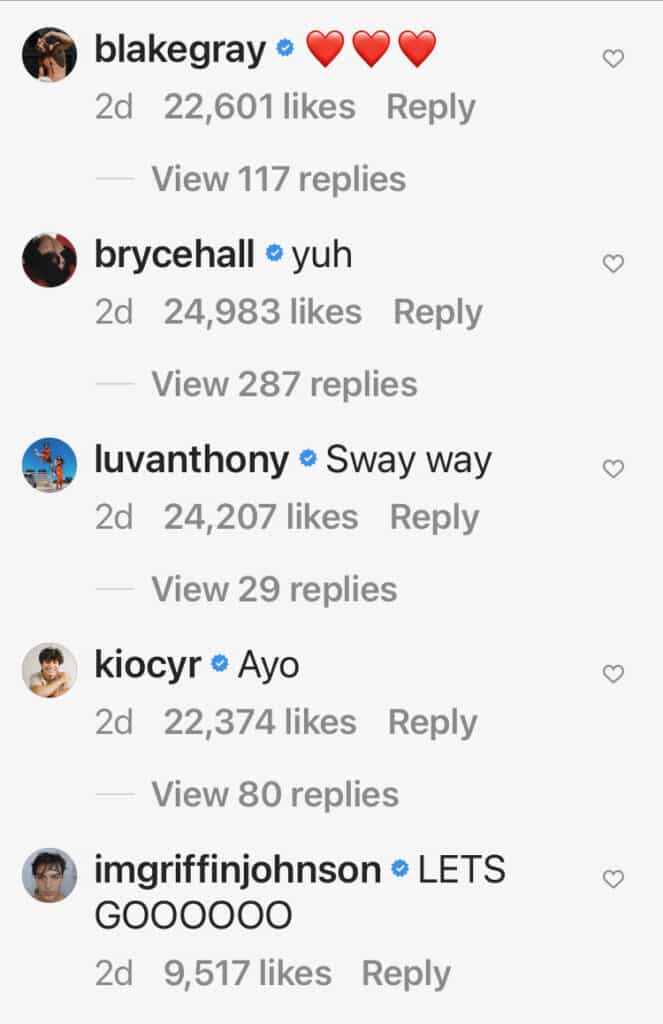 Throughout the show, fans and creators were very engaged with the awards show and its results. Maybe next year they can do a live show and transform it into a physical event.