Nobody likes Trump. Well, we knew that, but now he is apparently starting to acknowledge it? In a press conference this morning, when discussing Doctor Anthony Fauci and attempting to diminish his credibility he made a statement along the lines of “everyone likes Fauci and no one likes me” and so the internet did what the internet does best. Latched onto the phrasing of Trump’s sentence and now it’s trending on Twitter.

#WhyIDontLikeTrump
I don’t like a megalomaniac who's a twisted liar, a racist, a traitor, a grifter, a fascist, a cruel sadist, who's sat back & watched 150K people die from Covid; who w/the help of GOP has destroyed everything great about America.@realDonaldTrump#NobodyLikesMe pic.twitter.com/Hdxcm2hAtu

People have been attempting to keep the president trending in a negative light trending on Twitter for a while, some would say for the entirety of his presidency. But as we get closer to the 2020 election this November the Anti Trump part of Twitter (which is arguably a very large part of the platform) have taken it upon themselves to keep Anti Trump Trending.

This morning’s hashtag craze comes on the heels of last night where #WhyIDontLikeTrump was trending with over a million tweets being written on the topic. 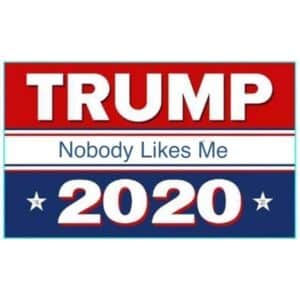 Now, this might seem somewhat obvious, there are a lot of people who don’t like Donald Trump. Infact a good portion of the popular vote didn’t even go to him when he was running in the 2016 election. And after his poor handling of the Coronavirus outbreak in the US and the success of the Tulsa Rally TikTok debacle it seems almost comically easy to rag on the president.

But amidst all of the viral TikTok trends of reserving seats for an empty rally, and no matter how many times that #WhyIDon’tLikeTrump or #NobodyLikesMe trends on Twitter. It is important to remember one thing. If we can all put our weight behind making the president feel bad on Twitter and TikTok we gotta make sure that we actually vote in November, whether it is in person, or by mail. If millions of people can reserve seats at a rally to make Trump feel bad those same people should be sure to vote him out of office.