As the cries of little children overbears the silence, and panicked mothers and fathers trying to escape the cruel conditions of Trump’s America become ever more hopeless, it’s just a continuous wake up call to how corrupt America has become.

At the start of the year, news spread that Trump and his authorities were tearing apart immigrant families, by pulling children away from their parents and locking them up in concentration-camp like buildings, called ‘Tent City.’ If imprisoning innocent little children who were looking for a better life isn’t sickening enough, Trump has now taken new levels to his unprincipled regime by allowing authorities to throw tear gas at people trying to cross the border, including little children and expecting mothers. It’s an unprecedented act in modern society today, and with hundreds of devastating pictures of children screaming and coughing after being choked by the gas, it’s a crime against humanity that shouldn’t have a place in society, but under Trump’s rules, it’s becoming much more frequent.

These devastating attacks began on Sunday night, around the San Ysidro border crossing. Despite many suggesting how disgusting the reaction from Trump’s officials were, they defended themselves by saying that they were only trying to ensure public safety by tackling the force of hundreds of people rushing towards the border, in which some were getting aggressive.

Although, there have been two images circling around from human rights advocates, that portray an immense amount of emotion that is indescribable. It shows a panicked mother who’s trying her best to drag her two children, who are dressed in diapers and barefoot, away from the gas that has just been set off right next to them. Not only are those two pictured, but so are hundreds of devastated people in the background who are also trying to flee. 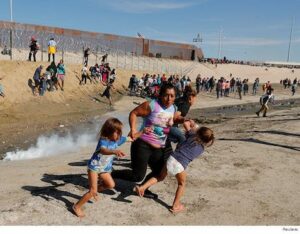 Asylum seekers are not criminals, and neither are their actions. They tried to flee to a place of peace but were only met with more violence. This is not the same country that used to be a place of opportunity and freedom, that welcomed all – it is now a place that attacks the innocent and praises the evil.