After the long expected decision for Derek Chauvin’s trial was finalized, convicting him of manslaughter and murder on Tuesday, Tucker Carlson presented the news on his evening show in a rather racist manner. Carlson was heavily criticized across social media for his comment arguing that the jurors were intimidated due to the months of protests across the nation that followed Floyd’s death.

The Fox News host continued to suggest that the decision wasn’t based on the testimony of more than three dozen witnesses or the ruthless video of Floyd being mistreated by Chauvin as he pleaded, “I can’t breathe.”

“The jurors in the Derek Chauvin trial came to a unanimous and unequivocal verdict this afternoon: ‘Please don’t hurt us,’” Carlson stated on “Tucker Carlson Tonight.”

He added, “Everyone understood perfectly well the consequences of an acquittal in this case. After nearly a year of burning and looting and murder by BLM, that was never in doubt.”

Attacking The Trial As Unfair

Carlson’s show was dedicated in attacking the trial as biased. The claims were based on the fact that the Democrats urged a guilty verdict by protesting and making statements. Multiple of Carlson’s colleagues however thought the opposite as they celebrated the result which found Chauvin guilty.

Jeremy Barr, a Washington Post reporter found that Jeanine Pirro, a former county judge who is also an opinion host on Fox, said, “clearly, the verdict is supported by the facts.” Similarly, Fox News co-host Juan Williams added “it would have been a kick in the stomach” if Chauvin had been found innocent.

This has not been the first time Carlson expressed doubt over Chauvin’s case as in February he said, “There was no physical evidence that George Floyd was murdered by a cop. The autopsy showed that George Floyd almost certainly died of a drug overdose, fentanyl.” In the video captured by a witness of the scene, Chauvin clearly knelt on Floyd’s neck for more than nine minutes before taking his last breath.

Two autopsies in fact confirmed this, one private and one done by Hennepin County —both concluding that Floyd’s death was murder.

On Monday, Carlson continued to spark controversy blaming the media of “lynching” Chauvin. He emphasized that most Americans “still cannot say with any specificity just how” Floyd died. 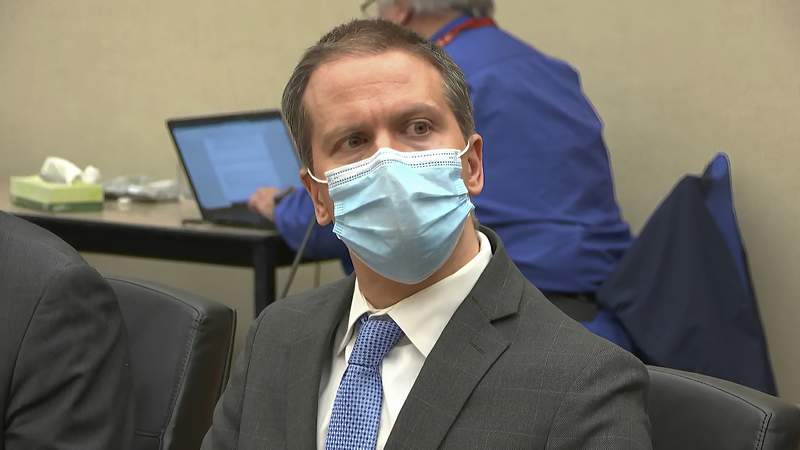 During his show on Tuesday, Carlson and several guests argued that Chauvin’s trial was affected by the nationwide, bold movement to support Floyd and make the police accountable for his death. President Biden was also part of the accusations as he made a public plea along with other Democrats wanting Chauvin guilty.

Carlson said, “If given the maximum sentence under the law, he will spend the rest of his life in prison,” and then asked, “Is that a fair punishment? Is the officer guilty of the specific crimes for which he was just convicted? We can debate all that.”

He then mentioned how the racial justice protests overthrew the criminal justice system.

Conservative commentator Candace Owens who was a guest on the show echoed this opinion.

“What we’re really seeing is mob justice. That’s really what happened with this entire trial,” she said, later adding, “This was not a fair trial. No person can say this was a fair trial.”

A former New York corrections officer went on Tucker's show to advocate for different policing tactics in the wake of George Floyd's death.

Tucker not only dismisses his analysis, he mockingly laughs at him before cutting him off mid-sentence.

Carlson interrupted Gavin as he spoke about the changes he would like to see the police make regarding arrests.

The host’s mocking response followed a loud laugh, “Yeah, well, the guy who did it looks like he’s going to spend the rest of his life in prison so I’m kind of more worried about the rest of the country, which, thanks to police inaction, in case you haven’t noticed, is, like, boarded up.”

He then cut Gavin off, saying, “Nope. Done.”

Twitter users were one of the first to fight back against Carlson’s inappropriate comments, calling him “vile” and a “lying racist.”

How does Tucker Carlson have any sponsors left?

.@TuckerCarlson is a lying racist and an enemy of the people.

Tucker Carlson is vile. I'm disgusted but not surprised he would stand with a killer then, just as he does today. https://t.co/nL7RvjhawC

Everything with Fox News is disgusting… pic.twitter.com/jFyg8FWN4i

Tucker Carlson really put his own damn head above this graphic. You can’t make this stuff up. pic.twitter.com/EdMkmywb7L

Justice is served following Chauvin’s conviction, however immense nationwide change is far from being accomplished. The movement has been initiated but people need to rise up and fight against racism in a country which claims to fight for equality.