It seems as though Bella Thorne has yet again found herself in another OnlyFans drama. The 23-year-old actress went on her Instagram Stories and claimed to be the first to join the app known for subscription-based content. After posting the claim, people were quick to remind her that she certainly wasn’t the first. 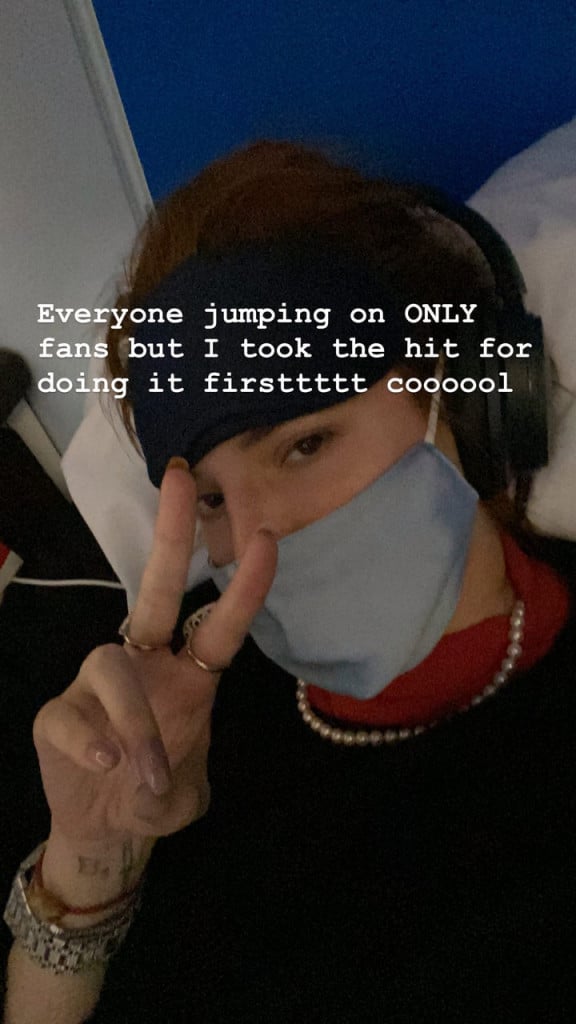 “Everyone jumping on OnlyFans but I took the hit for doing it firsttttt coooool,” Thorne wrote on Instagram Stories over the weekend. She continues to comment by saying, “Legit everyone in my newsfeed following in my footsteps. But when I was getting heat y’all were scared. This keeps happening to me hahahah.”

Bella Thorne joined OnlyFans (OF) in August. On her first day, she broke a record by earning a million dollars on the app. Afterward, she received a lot of criticism for her actions.

Now she found herself again receiving criticism for claiming that people are “following in her footsteps” by creating an account.

But before Thorne even joined OnlyFans there were other celebrities on the platform. Cardi B and Sonja Morgan from The Real Housewives of New York had already been producing content for OnlyFans before she had joined.

Now, many celebrities have created an account on the app like Tyler Posey, Tyga, and Amber Rose.

Bella Thorne is trending on Twitter for the comment she made over the weekend. Many calling her out for claiming to be the first one when she wasn’t.

If #BellaThorne said she was the first to join and scam, then cause the platform to install new rules and regulations that affected workers on there, then I'd totally agree with her. pic.twitter.com/0VUPOst9Si

Others made comments simply stating that she didn’t start the OF trend for her to be saying that people are following her.

this the same Bella Thorne who showed up late as fuck to onlyfans and then screwed everyone over with the price cap? Why do celebrities think they're the first and only people in the world to do things? pic.twitter.com/AcaWhuc9Hr

Another person fed up and referencing the changes it made to the other creators on the app.

the only wave Bella Thorne started was stealing money from sex workers pic.twitter.com/inCYl8Ig7R

This user came with her receipts. She shared screenshots of other celebs that had joined OnlyFans before Bella Thorne.

Bella Thorne: I’m the first celebrity to make an onlyfans

Autumn Kay expressed her anger with Thorne saying that her account changed the rules for her and other sex workers.

Try acknowledging the SEX WORKERS that made onlyfans the platform it is today.

WE are the ones that took the heat in the first place.. YOU are the one jumping on OUR train.

stop acting like you’ve been around. you’re the brand new one, bitch. pic.twitter.com/TFzeifiBXC

Can someone tell Bella Thorne that she got shamed because she engaged in unethical practices and contributed to the cutting of revenue's for fellow sex workers. pic.twitter.com/iIpDTNCq8t

Remember the very first sex worker on the OnlyFans platform, Bella Thorne? Me either. She sure blazed a trail for delusional has-beens, though. pic.twitter.com/Kf7SgTCRbe

Overall, the response to her comments did not go well AT ALL.

Bella Thorne broke a record on her first day but it came with some drama she didn’t expect. Thorne was getting heat for essentially abusing OF. She was releasing a $200 worth pay per view photo that she claimed was fully nude. This caused a lot of hype online but unfortunately, after paying the $200 the photo wasn’t fully nude.

This ended up causing some real consequences for OnlyFans creators who rely on the platform as their main form of income. The OF platform is a content subscription service. Creators get paid monthly for their subscriptions and content. It’s pretty similar to the Instagram layout but the content is usually more x-rated content.

During the Coronavirus lockdown, the app became extremely popular since it allows people to get money from working at home. Thorne has claimed that she made over a million dollars on the app already without even posting any kind of pornographic content. Although she has stated on her social media that she didn’t plan on posting on nude photos on the platform.

After that, many subscribers requested refunds. They received more refund requests that the app could even handle. The situation caused the app to instate a “tip limit” which caps how much a subscriber can tip a creator. Creators can no longer be tipped more than $100. The app also changed how often creators get paid. They now get paid every 30 days instead of every week which caused creators to be very angry.

Although it wasn’t outright stated that it was Bella Throne’s fault, a spokesperson from OF made a comment about their new changes to Rolling Stone. “Transaction limits are set to help prevent overspending and to allow our users to continue to use the site safely. We value all of the feedback received since this change was implemented and we will continue to review these limits,” the spokesperson stated.

Celebs being on OnlyFans is something that is often debated between subscribers. Some like to see the exclusive content that celebrities produce while others question why they need to be on the platform in the first place.

That is something that Thorne had to deal with when she first announced her account on the app. People questioned why she is on there when she doesn’t need the money. Celebrity accounts are said to be taking away from the smaller creators who need the money more than the celebrities do.

What are your thoughts? Do you think it’s unfair for celebrities to be on OnlyFans?