After Drake Bell’s Nickelodeon days came to an end and his American music career flopped, fans were shocked when the ‘Drake and Josh’ star completely reshaped his career.

On Thursday, Drake Bell began to trend on Twitter after some fans realized that Bell had changed his name on social media to “Drake Campana” – campana is bell in Spanish – and only tweets in Spanish.

Although many have just realized this surprising change to Bell’s social media, it has been almost a year since Bell changed his name.

Why Did Drake Bell Change His Name?

Last November, Bell performed a cover of the song ‘Cielto Lindo’ at the 2019 Telehit Awards, a Mexican music award show. After he sang in Spanish, Bell’s social media following skyrocketed as he became widely popular among Latinos. Because he was greatly beloved by the Latino community, Bell transformed his career to no longer neglect his Hispanic fanbase.

Shortly after his hit performance, Bell tweeted that he will now only be posting in Spanish in order to appeal to his Spanish-speaking fanbase.

He also posted a picture of his Mexican ID where his name is changed from “Bell” to “Campana.” 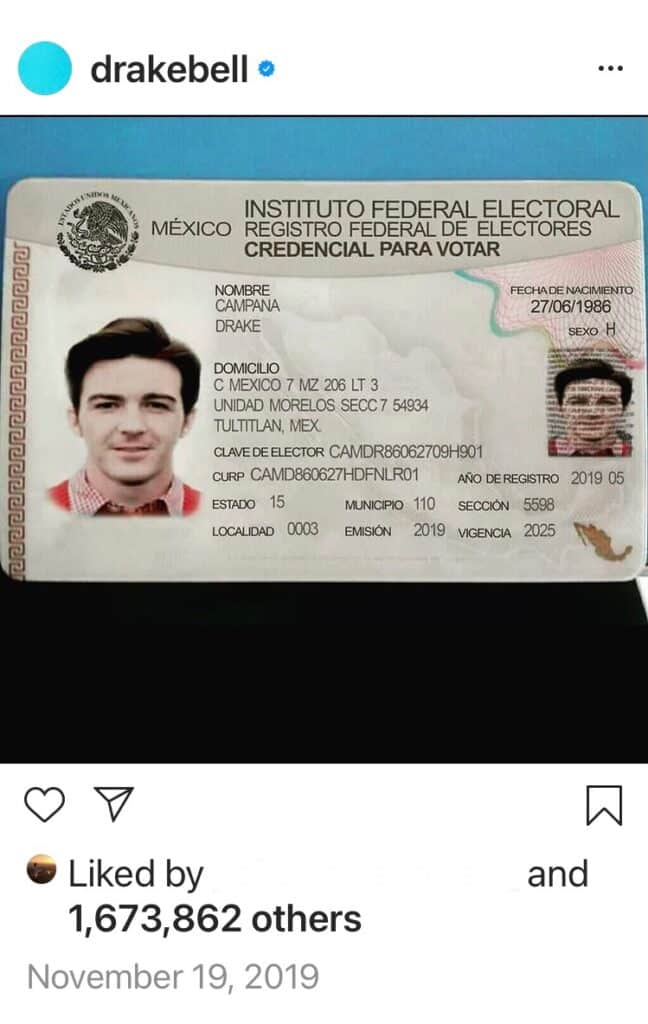 Around the same time, he posted numerous memes where he suggest that he likes Mexico more than the United States. 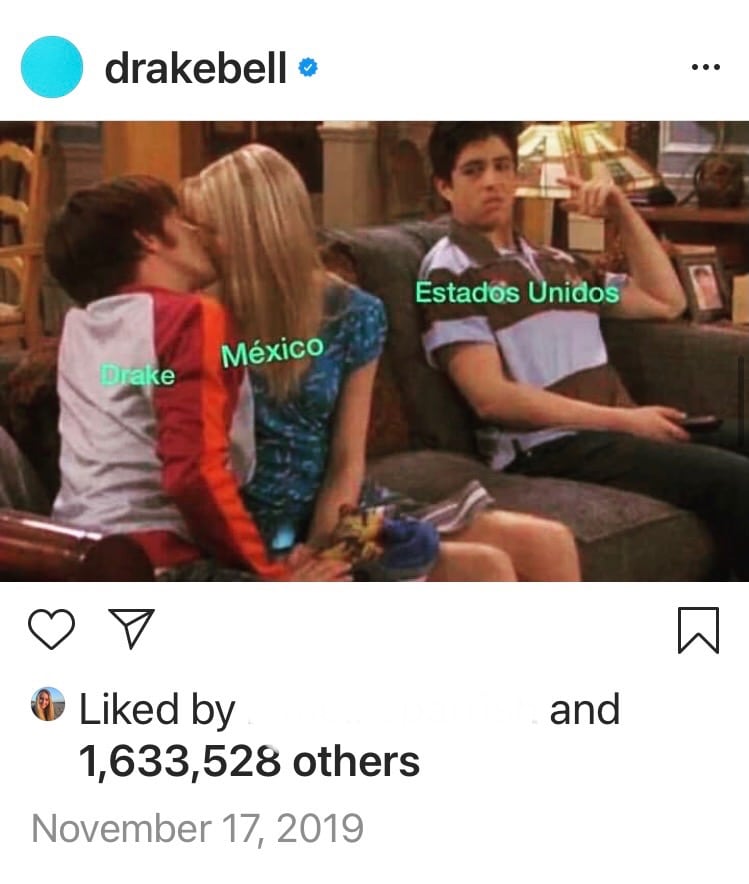 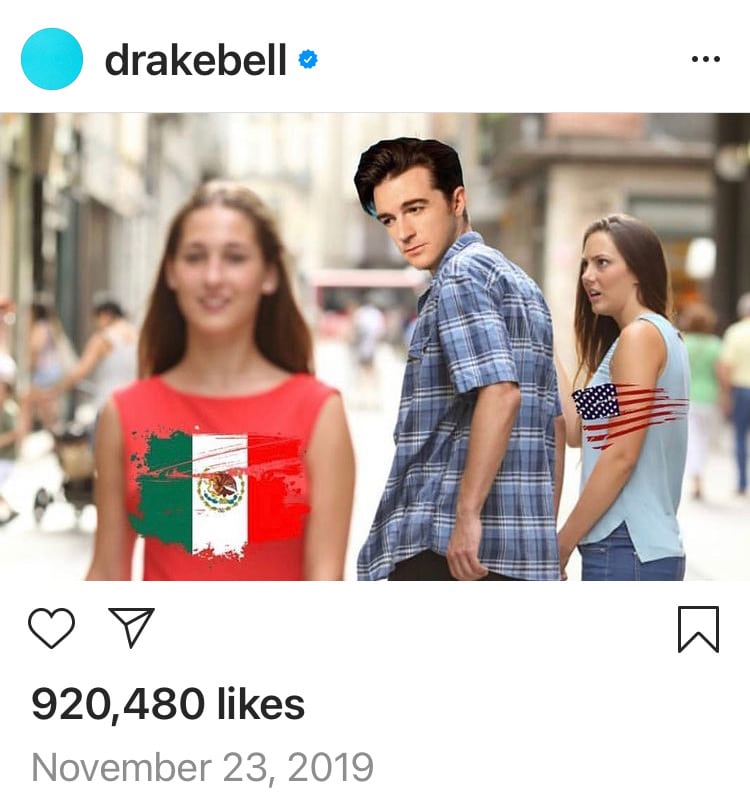 Within the last year, Bell has released numerous songs in Spanish including his most popular ‘Fuego Lento,’ which has over 22 million views on YouTube.

And over the summer released ‘Diosa.’

Though Bell has already released numerous songs in Spanish and announced his departure from the American music industry last year, many fans are just learning about Bell’s new persona.

So … apparently Drake Bell was more popular in Spanish speaking countries, so he moved to Mexico, changed his name to Drake Campana & now writes songs in Spanish & only posts in Spanish … this must be a fever dream … this is his actual IG … pic.twitter.com/jcY2IahwoH

Many have found the fact that Bell changed his name to be hilarious.

Others are very confused as this news was unexpected.

guys can we talk about drake bell for a sec …. what’s going on pic.twitter.com/6NzXvqup0A

Nothing is more confusing to me than drake bell changing his name to Drake Campana, moving to Mexico and only speaking/ singing in Spanish https://t.co/t19CvI7GRQ

Some immediately thought of the scene in ‘Drake and Josh’ where Drake does an amusing Spanish voice-over for a toy.

But some think Bell made the right move in switching to Spanish as they enjoy listening to his new music.

maybe Drake Bell was meant to be Drake Campana all along bc this actually sounds good 😭💀💀pic.twitter.com/wbg8joWu1b

One user suggested that Bell may have made the switch because he is able to profit off of new music, rather than repeatedly perform the ‘Drake and Josh’ theme song for American audiences. 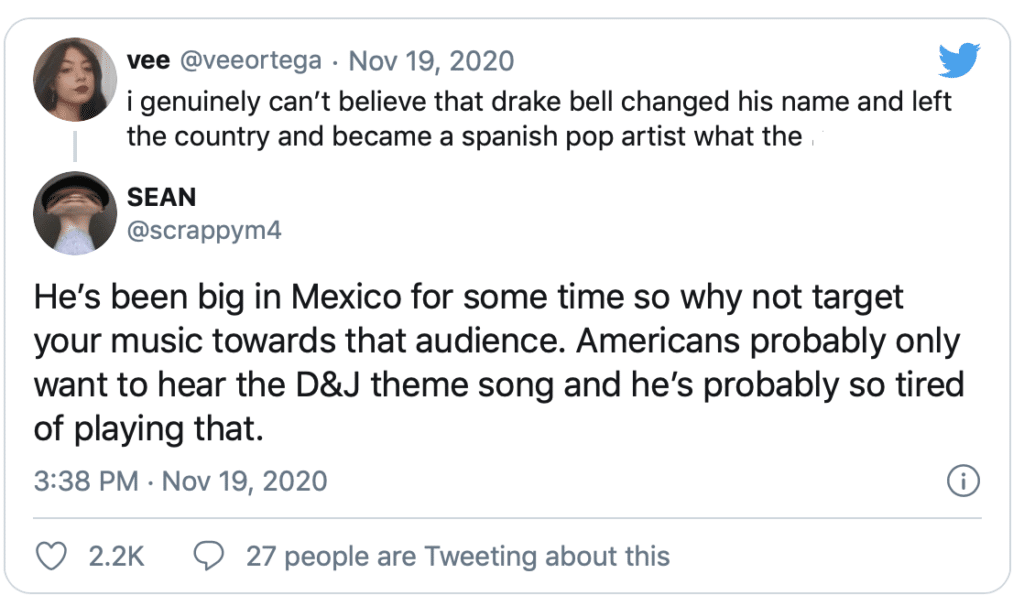 But Bell’s critics believe Bell moved to Mexico to escape being exposed for abusing his ex-girlfriend.

Just found out Drake Bell was outed as an abuser, changed his name to Drake Campana, fled to Mexico, and started a new life as a Spanish pop artist who exclusively sings and writes songs in Spanish. Literally nothing could have prepared me for this information

Drake Bell really got exposed as an abuser then packed it up and fled to Mexico and started a music career over there and only posts in Spanish now. What in the Lifetime?

In August, Bell’s ex-girlfriend, Melissa Lingafelt posted a TikTok where she tells her story about her toxic relationship with Drake Bell that occurred over 10 years ago. While with Bell for three years at a young age, Lingafelt said Bell verbally and physically abused her.

This is my truth. I hope this message reaches young girls, and that no one has to go through what I did. #2020survivor

After coming out with her story, Lingafelt exposed Bell for repeating his harmful behavior with other young girls by posting a variety of texts and DMs where other women shared their horrific experiences with the Nickelodeon star.

Reposting with blurred name. This is what I was hoping for. There are several stories just like this out there. #endabuseagainstwomen

Since Lingafelt came out with her story, Bell denied the allegations, though he admits to calling her hurtful names during their breakup. Bell follows his denial with claiming that Lingafelt asked him for money last year when she was going through a rough time, and he suggested the allegations may be a plot to get more.

Last week, Bell released another new song; however, it seems that he might be going back to his American roots as the song is in English.

However, when Bell saw that he was trending on Thursday, he made sure to take advantage of the opportunity to promote his most popular songs ‘Fuego Lento’ and ‘Diosa.’

Sometimes we forget our favorite artists and celebrities are famous around the world, though they mostly accommodate their English-speaking audiences. Bell decided to mix things up and show his appreciation for the community which appreciates him the most, and it greatly boosted his career.

It is unclear if Bell permanently moved to Mexico because his Twitter bio says he lives in Los, Feliz, CA, but it is evident that he did spend a lot of time in Mexico this past year.

What are your thoughts on Drake Bell changing his name and only tweeting in Spanish? Was this a shock?