A video posted on TikTok shows people in line for early voting in DuPage County, Illinois but some weren’t cooperating. Two women were in front of the line and they were holding the line up because they weren’t wearing masks. Isn’t it obvious by now that you are required to wear a mask to get into any place these days.

The women were not only refusing to wear a mask but were refusing to go to the back of the line as they were holding up the line.

Jim Crow laws were state and local laws back in the 19th and 20th century. The laws denied African Americans the right to vote, get a job or an education, and other opportunities. In this case, the two women thought they were being victims of the Jim Crow law. It was an exaggeration, simply because they were being told to go to the back of the line since they didn’t want to wear a mask. People waiting in line were annoyed by their ignorance. One man tells the women, “just put on a mask and get it over with.”

Towards the end of the video, two people from inside the building tell the women to wait in the back of the line. The women were not happy. Voting by mail would’ve been the best way to vote for those who refuse to wear a mask.

The TikTok video was shared on Twitter by a user and said: “Entitled anti-maskers hold up the voting line & compare it to Jim Crow laws.” Viewers are referring to the two women as “Karens.”

There were  comments saying people should wear masks to prevent spreading COVID-19. Viewers also said it would’ve been a lot smoother if the “Karens” would’ve just gone in the back of the line. The fact that the women wanted to play the victim card against the Jim Crow law surprised viewers. As well as not calling the police on them or not letting them vote if not wearing a mask.

“You ever heard of Jim Crow laws”. God white people want to be oppressed so bad.

They aren’t the only one who hate wearing a mask, but it is to protect yourself and others. 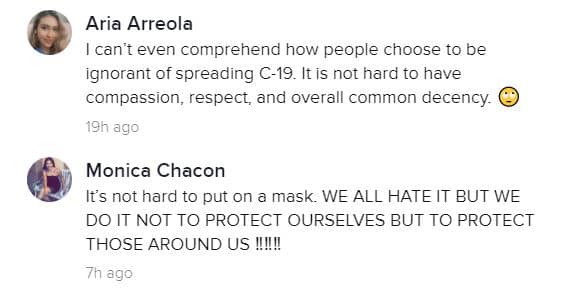 On TikTok, some people were defending the two women saying masks aren’t mandatory. Since masks are required in public, it is obvious they are required if going to vote in person. Is staying 6 feet enough?

There are hotlines for people to call if they come across a problem when trying to vote. Former President Barack Obama shared some hotline numbers on Twitter.

An important reminder as millions of folks across the country vote early or make plans to vote on November 3: You have the right to vote. If you run into any issues at your polling place, call 1-866-687-8683 or your voter protection hotline. pic.twitter.com/EKzZvdZVQt

It is important to vote but more importantly wearing a mask if voting in person.