VIDEO: Check Out This Weird Exchange Between Trump and Jim Acosta

Not even a pipe bomber can stop Trump from denigrating CNN. 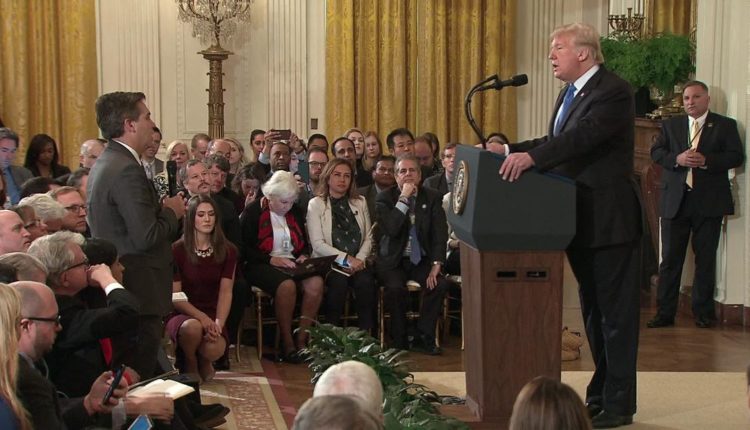 As is always in this weird tug of war in Washington, DC, anything that is good for the Democrats, such as the historic retaking of the House and the incredible wins for women in congress, tends to be bad for the President, who until now has had almost a cartoonish lack of checks and balances on many of his decisions, such as the child concentration camps or the “Muslim Ban” that he pretends isn’t a Muslim Ban. By the way, you know that’s in effect right now? Yeah, I feel real safe in America, your intrepid journalist typed sarcastically. So now we get the Wednesday morning blow back in a tradition that is as rare as it is bananas, the Donald Trump press conference. And folks, this one did not disappoint.

Trump was defensive and did his usual business interrupting reporters, making bold blustering claims and, weirdly enough, asked the Democrats to believe in bipartisanship (something that seems very important to him when it’s he who needs it, and completely unimportant when uhh… people don’t want an accused sex criminal to sit on the Supreme Court for the rest of his life). The clip that really took people by surprise however was on between Donald Trump and CNN’s Jim Acosta.

Trump has long called CNN an enemy of the people, something that probably resulted in a fan of Trump’s sending a pipe bomb to the news network, and this time was no different as he remained belligerent with Acosta who tried to ask the president about his role dividing the country. Trump instead answered the question he wanted to instead, the one about how the immigrant caravan is the real problem in this country or whatnot, and kept demanding Acosta sit down. An aide even comes to grab the mic out of Acosta’s hand at one point just because the president didn’t want to answer his question as other journalists came to his defense.

What do you think of the weird clip above? Let us know in the comments or on Twitter at @WhatsTrending.