We’re amazed here at What’s Trending Headquarters just how much this “Kanye Loves Trump” story keeps evolving. After creating a rift between himself and Saturday Night Live following an impromptu monologue insulting the show after the credits rolled and the cameras turned off, Kanye has finally met with the force that has helped make him such a controversial figure over the last few years: Donald Trump. Kanye then delivered what is– a rant if you don’t like him, and an impassioned soliloquy if you love these changes (a monologue maybe if you’re indifferent) that lasted for ten minutes to the president of the United States as he sat in silence. It was an exchange of both figures’ favorite things to do — for Kanye West it was to talk, and for Donald Trump, to sit there and not understand something.

Kanye covered a wide variety of subjects including his own mental illness, the power of his own celebrity (man, he really is like Trump), and how he loves Hillary but Hillary didn’t want him to play catch with his son. He covered his thoughts on the 13th Amendment, and how the element of them that puts prisoners into slavery makes it a poorly written amendment (actually, there is something there, but given Trump’s own barely coded declarations of white supremacy there’s a whiff of weirdness on it).

Kanye discussed how he feels that his MAGA hat gives him power, and went on a rant/monologue/soliloquy (in my opinion… rant) about missing a male role model, and saying that Hillary’s campaign did not provide him with a certain male energy which certainly seems very sexist to us, but this is already an insane situation, and the craziest stuff is yet to come.

This hat, it gives me power in a way. My dad and my mom separated, so I didn’t have a lot of male energy in my home. And, also, I’m married to a family that, you know, not a lot of male energy going on. It’s beautiful, though! I love Hillary. I love everyone. But the campaign “I’m With Her” just didn’t make me feel—as a guy that didn’t get to see my dad all the time, a guy that could play catch with his son—it was something about when I put this hat on it made me feel like Superman. You made a Superman.

I don’t know if Superman would approve of any of this.

Just a reminder that every incarnation of Superman's archenemy since 1986 has been based on Donald Trump. pic.twitter.com/L0MHqFu6bU

At one point in the speech Kanye opened up his phone and showed Trump a gif of a hydrogen powered plane he called the iPlane 1. The president laughed that maybe it should replace Air Force One. Hey, didn’t the Hindenburg burst because of flammable hydrogen? In any case here is a photo of rapper Kanye West showing Trump his phone. 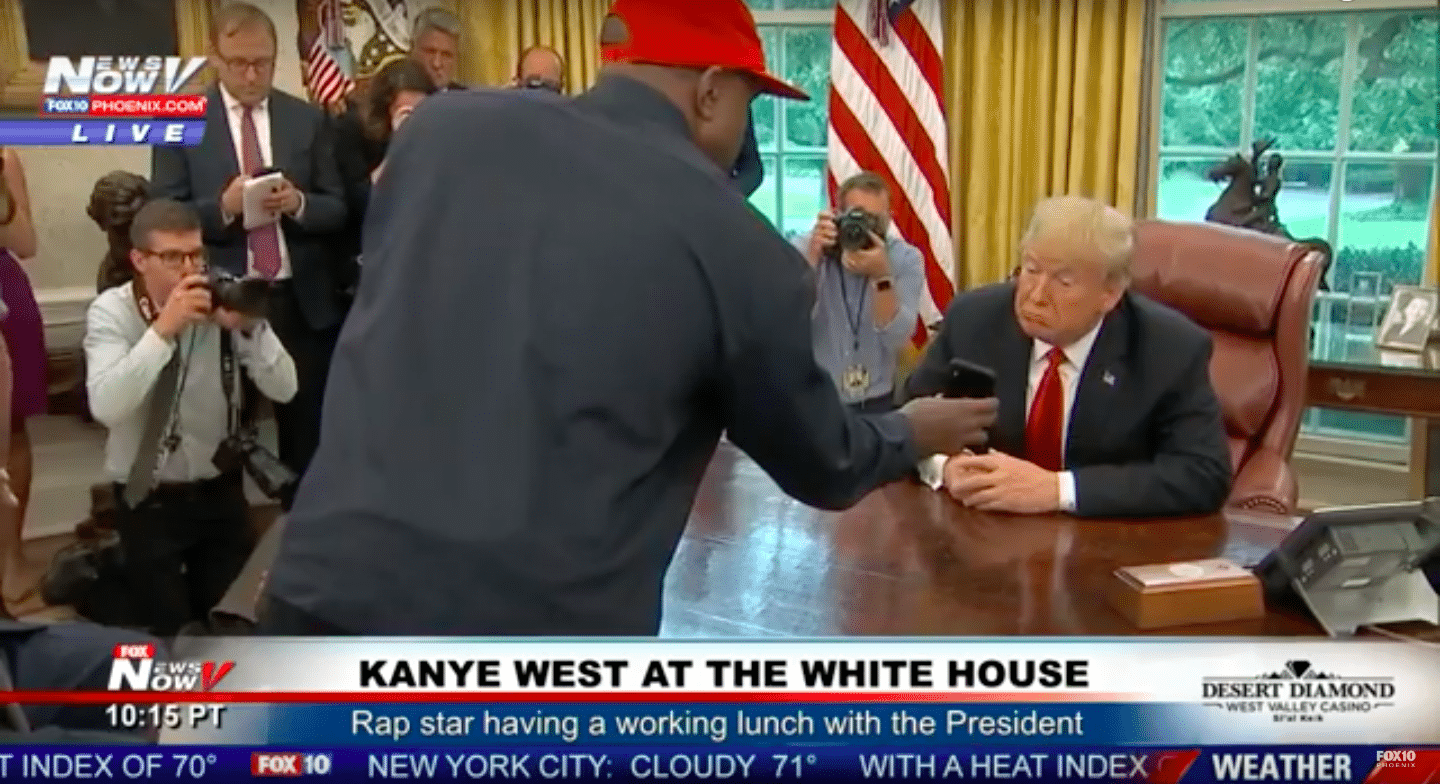 One part of the speech did get Trump to perk up, when Kanye said “What I need the liberals and Saturday Night Live to improve on, If he don’t look good, we don’t look good”, and Trump, smugly thrilled to his core agreed.

Look, all of this was dumb.

Kanye wanted attention, well congratulations Kanye. You have gotten attention. You have gotten all the world’s attention at the expense of your legacy and dignity. Even if you support Donald Trump, there is not a part of this speech that makes a lot of sense or is very coherent. In that regard, congratulations Kanye. Storming the stage to interrupt Taylor Swift has finally reached its apex with him storming the national stage.

All of this. Was weird.

But what did you think of Kanye’s speech? Let us know in the comments or on Twitter at @WhatsTrending.