I don’t know what Lady Gaga is going to be up to in Las Vegas with her Enigma residency, but damn if I can’t help but want to thumb a ride to Sin City to see exactly what the superstar has planned in between her hit movie and the awards she’s probably going to win for her hit movie (A Star is Born, naturally). Of course, whatever is teased has been put further with this insane, seemingly Bayonetta inspired short released by the superstar on her Twitter feed. Witness Lady Gaga’s video game girl avatar as it flies through infinite dimensions (what is she, Spider-Gwen or something? Haha, I liked Spider-Verse a lot.)

In any case, check out the insane video above then return to us below!

So what could the CGI girl mean? Clearly it’s influenced by Bayonetta — or at least I think it is. Lady Gaga Tweeted about how much she loved playing the game over Thanksgiving break in a way that was a highlight, at least, of my year on Twitter. Bayonetta. You can play it on the Switch and it is, let me tell you, remarkable fun. 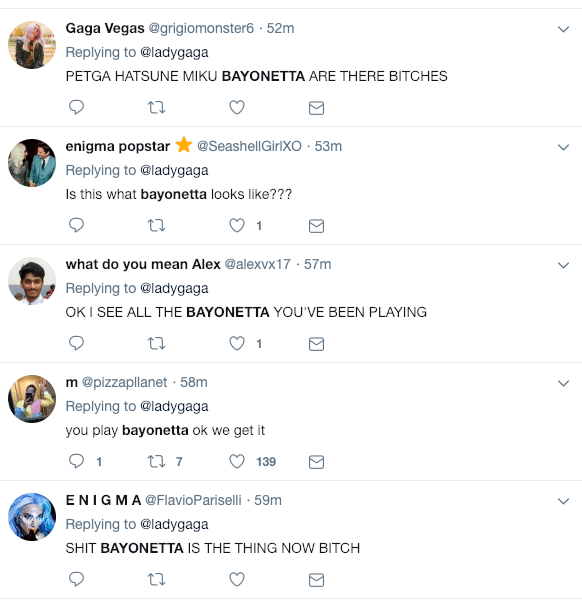 But more than anything else it means that Lady Gaga — the ones Bowie influenced Warhol type, turned Tony Bennett partnered lounge singer with “Cheeck to Cheek”, to alt country with both “Star is Born” and “Joanne”, and now it looks like the artist might be headed into the future. Is it the same future as Janelle Monae? The same future as the Toonami robot man from the aughts? Who knows. But it looks like it’s inspired by the heavy dose of new influences that the artist has been taking in as of late.

This is new, and includes Lady Gaga looks forward in terms of influences and not just in her social politics. Or at least, she’s picking at nostalgia that’s precious to me. Come on, Toonami robot!

What do you think of Lady Gaga’s video? Let us know in the comments or on Twitter at @WhatsTrending.