Corey Lewis, a youth mentor from Marietta, GA, was babysitting two white children when another woman followed him and called the police. 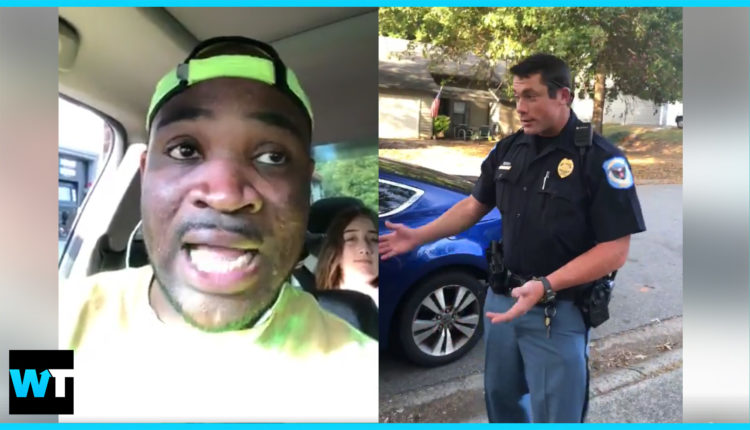 A black man was followed by a white woman and ultimately questioned by police because he was…babysitting two white children. It’s the latest trend in the stories of white people calling the police on black people doing well… literally anything

On October 7, he took Nicholas and his sister Addison to Subway and Walmart, when a white woman approached him and asked to speak to the kids.

Lewis told Inside Edition that the woman seemed immediately suspicious, and kept asking to speak to the children alone. Despite the kids not acting like they were in distress, the woman followed them back to Lewis’s neighborhood and called the police.

The police officer seemed to understand pretty quickly that nobody was in any danger and let Lewis and the kids go. Dana Mango said she’d made arrangements to have Lewis look after her kids weeks ago, and that she’s outraged by what happened.

Apparently, the parents got the call about what happened while they were at dinner, and Dana initially thought it was a prank. Buzzfeed talked to the local police and confirmed that they’d received a call about “suspicious behavior.”

Lewis, and now the media, are trying to identify the woman who followed them, and obtain the recording of the call she made to police. She doesn’t yet have an official nickname, though the Root has dubbed her “SuperBecky.”

Probably because of her superheroic effort to rescue children in peril from the very kind care of an African-American babysitter. Corey Lewis’s mentorship program is called Inspired By Lewis, and it’s got great reviews on Facebook from families who use it as an after-school program.

Corey Lewis said: “I work with white kids every day and even though you always hear about this stuff, it’s still so demoralizing when it happens to you. I guess the good side of it is that it keeps a light on an issue that we need to keep talking about.”

So, look, this woman definitely racially profiled Corey Lewis, assuming something must be wrong for a black man to have two white children with him. But, we understand that child trafficking and kidnapping are serious issues. So if the woman who called the police is really worried about kidnapped kids, we know of some who could definitely use some more attention.

Should the woman who called the police have her identity made public? Let us know in the comments or on Twitter at @WhatsTrending.

VIDEO: Here’s Why Some Amazon Workers Are Actually MAD About Their $15/Hr Raise