Welcome to The Blockchain Report, your daily rundown for the latest in crypto, with your host Taylor Nikolai. The SEC just settled against some ICOs. The SEC settled charges against two ICOs for selling unregistered securities. 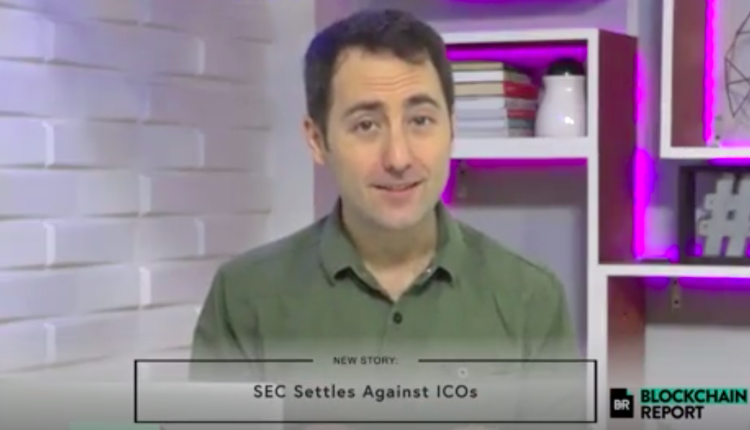 Welcome to The Blockchain Report, your daily rundown for the latest in crypto, with your host Taylor Nikolai. The SEC just settled against some ICOs. The SEC settled charges against two ICOs for selling unregistered securities.

According to Forbes, the U.S. Securities and Exchange Commission (SEC) has settled charges against two initial coin offerings (ICOs). These two ICOs raised in $27 million in total by selling unregistered securities tokens. The two companies running the two ICOs are CarrierEQ and Paragon.

Airfox and Paragon did not admit or deny to the SEC selling unregistered securities, as part of the agreement to paying the penalty.

Stephanie Avakian, co-director of the SEC’s enforcement division, said: “We have made it clear that companies that issue securities through ICOs are required to comply with existing statutes and rules governing the registration of securities… These cases tell those who are considering taking similar actions that we continue to be on the lookout for violations of the federal securities laws with respect to digital assets.”

According to CCN, the cryptocurrency exchange Binance made a massive transaction that shows the power of blockchain technology and Bitcoin. In a transaction sent by Binance to a cold storage wallet $600 million was transferred. That made it the largest unspent transaction for the day, and one of the largest transactions in the history of Bitcoin.

Found in block 550155, the $600 million transaction cost Binance only $7 in fees. What’s important to note is that a transaction of this size, in the traditional banking system, would take several weeks. The transaction on Bitcoin took only a few hours to complete. If this transaction were done using PayPal, it would have cost approximately $17.4 million in fees to transfer $600 million.

What’s especially important about this statement is that Sberbank isn’t some no-name bank. Sberbank is the largest bank in Russia, and the third largest bank in Europe. Gref continued by saying: “The hype surrounding the technology has passed, and it has entered a stage of industrial development… The technology will take a year or two to be applied on an industrial scale.”

Gref has consistently been a cryptocurrency supporter, and said that he’s optimistic about adoption of cryptocurrency and blockchain within the next 10 years.

And finally on today’s show, a main political party in Thailand held an election on the blockchain.

According to CCN, Thailand’s Democrat Party, is now the first political party in the world to have primary elections completely on a blockchain. The e-voting system used, which was placed on the Zcoin blockchain, was successful as it included over 120,000 voters. This event follows what was the first viral media of political resistance stored on a blockchain.

After racking up 30 million views in the first two weeks, it was then stored on a decentralized file storage system called IPFS. The Thai Democrat party then continued using IPFS in order to enable campaign integrity. People voted by using their mobile phones using an app, which required photo ID. But there was an option of going to one of the physical locations using a Raspberry Pi system.

It’s clear that elections are a fantastic opportunity for blockchain technology to be utilized.

Thanks for watching The Blockchain Report. If you want to stay up to date on all the latest crypto news and trends, be sure to follow us on Instagram, @BlockchainReport. We’ll see you tomorrow.